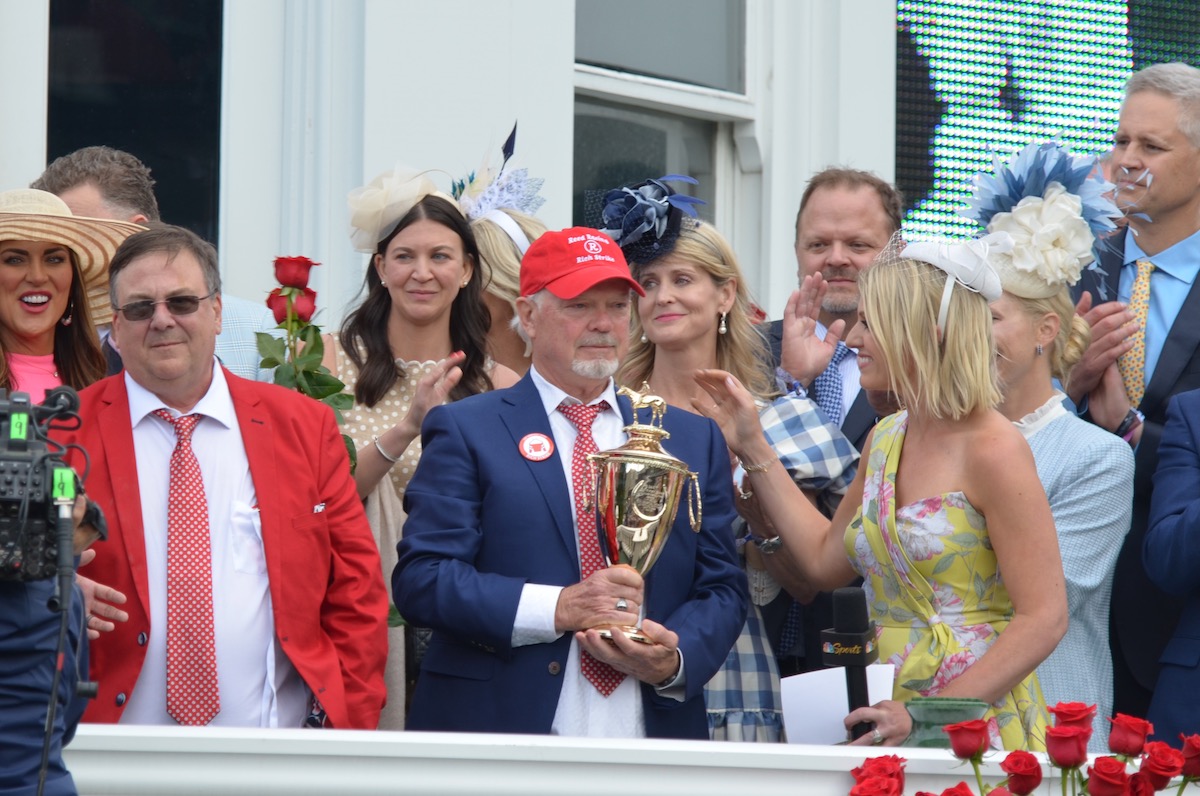 “Do not mistake temptation for opportunity.”

With horseracing fans still head in the clouds after the most improbable Kentucky Derby (G1) finish in more than a century, a win by 80-1 late-entry moonshot Rich Strike, the horse’s connections announced what seemed like an equally improbable decision on Thursday: Their Derby winner would not compete in the May 21 Preakness Stakes (G1), the second jewel in American racing’s Triple Crown.

Instead, Rich Strike, ‘Ritchie’ as he is known, would rest and prepare for the June 11 Belmont Stakes (G1) in Elmont, NY.

That decision eliminates the possibility of a Triple Crown winner in 2022, to which many racing fans responded: “Why?”

Owner Rich Dawson, who purchased Rich Strike for what now seems like the silly price of only $30,000, issued a statement Friday morning in response.

Our original plan for Rich Strike was contingent on the Kentucky Derby, should we not run in the Derby we would point toward the Preakness, should we run in the Derby, subject to the race outcome and the condition of our horse, we would give him more recovery time and rest and run in the Belmont, or another race and stay on course to run with 5 or 6 weeks rest between races.

Obviously, with our tremendous effort & win in the Derby it’s very, very tempting to alter our course & run in the Preakness at Pimlico, which would be a great honor for all our group, however, after much discussion & consideration with my trainer, Eric Reed & a few others, we are going to stay with our plan of what’s best for Ritchie is what’s best for our group, and pass on running in the Preakness, and point toward the Belmont in approximately 5 weeks.

We thank the wonderful Preakness & Pimlico folks that have reached out to us & very much appreciate the invite.

There are many considerations in how best to “campaign” a racehorse. Some are evident in Dawson’s statement, some others a likely topic of discussion before the decision to skip the Preakness was made. So, let’s unpack this saddlebag.

“…we are going to stay with our plan of what’s best for Ritchie….”

The Derby’s 20-horse cavalry charge start is among the most notoriously unpredictable and difficult in racing. The start is often where horses lose this race because of bumping out of the gate or poor positioning. This has been eased somewhat by the 20-horse gate that debuted last year, replacing the two 14-plus-6-horse auxiliary gates previously in use for the Derby, but still is a factor.

Rich Strike started from the farthest outside gate 20. While immediately moved toward the rail, jockey Sonny Leon still had a significant amount of distance to make up early. Luckily, the horse encountered little resistance and received a very clean trip.

Last at one point in the race, Leon was aided by a speedy pace early that stretched out the field and gave him room to maneuver Ritchie through traffic as the race progressed.

Leon faced one significant decision two thirds of the way through the race: whether to squeeze into the rail or weave right through the horse blocking his path, hoping a path to the rail would open. He chose the latter option, which turned out to be the correct choice. A path along the rail opened in the stretch and Leon rode it to a length victory.

The final time of 2:02.61 is comparable with “usual” Derby times—Secretariat’s 1973 1:59.40 still stands as the record for the Derby’s mile-and-a-quarter—but remember that Ritchie had run a “longer” race early in terms of distance.

As with all elite athletes, such a performance takes a physical, perhaps mental, toll. As people saw post-race in his encounter with his outrider, Rich Strike was still “racing.”

Given his connection’s reasonable plan—five to six weeks between races—the quick turnaround of only two weeks before the Preakness would be a difficult training task, particularly if he was still aimed at the Belmont.

“…it’s very, very tempting to alter our course & run in the Preakness at Pimlico….”

Indeed. There are only 13 winners of American horseracing’s Triple Crown in just over a century. What owner, trainer or jockey would not want their horse to join so elite a group of racing royalty?

During the post-race Derby press conference, trainer Eric Reed said: “I knew if we got in, they’d know who he [Rich Strike] was when the race was over.”

As Epicenter and Zandon battled for the lead in the Derby stretch, jockeys Joel Rosario and Flavien Prat were no doubt focused on each other, ignoring the horse sneaking up along the rail.

That would not happen in the Preakness.

The history of winning Derby longshots in the Preakness is not great. Let’s go to the Wayback Machine, starting with the past decade to see how longshot Derby winners have fared in the Preakness.

From 2012 to the present, only two Kentucky Derby winners left the gate at odds greater than 20-1:

Mandaloun (2021, 26-1): The declared winner after the disqualification of Medina Spirit for substance abuse did not race in the Preakness for rest.

Country House (2019, 65-1): The declared Derby winner after the disqualification of Maximum Security for interference was scratched from the Preakness due to illness and never raced again.

That’s it for the past decade. Now that we’ve touched the surface, let’s dig a little deeper, into all of history. Remember, too, there was no Triple Crown before 1919.

Apollo (1882, 32-1): The first horse to win the Derby without racing as a two-year-old—Justify would accomplish this feat in 2018—Apollo did not start in the Preakness.

Exterminator (1918, 29-1): The Derby winner the year before the establishment of the Triple Crown won first by Sir Barton, Exterminator would go on to become the U.S. Champion Older Male Horse in 1920–22 but did not run in his Derby year’s Preakness.

Gallahadion (1940, 35-1): The son of Sir Gallahad III, he won over favored Bimelech, a horse making his third start in eight days. He would go on to finish third at Pimlico.

Proud Clarion (1967, 30-1): He won over heavily favored Damascus in the third fastest time in Derby history [2:00.60] but finished third to his archrival in the Preakness.

Charismatic (1999, 31-1): Finally, a longshot Derby and Preakness winner, Charismatic is best remembered for being supported by rider Chris Antley after breaking his leg in the final stretch of that year’s Belmont.

Giacomo (2005, 50-1): He finished third in the Preakness, a memorable race in which Afleet Alex fell literally to his knees on the backstretch but recovered and won. Giacomo and fellow longshot Closing Argument combined to reward bettors with a massive $9,815 Exacta payout.

Mine That Bird (2009, 50-1): ‘Bird’ was ridden to victory on the rail by Calvin ‘Borail’ Borel. The jockey famously jumped horses for the Preakness and rode filly Rachel Alexandra to a win over runner-up Mine That Bird.

All that writ, honorable mention deservedly goes to War Emblem, winner of the 2002 Derby at 21-1 and the Preakness at 5-2 odds. He would lose his Triple Crown bid to Sarava, the longest odds winner in Belmont Stakes history at 70-1.

Coincidentally, both Sarava and War Emblem would be pensioned to Old Friends Thoroughbred Retirement Farm in Georgetown, KY where War Emblem passed in 2020 and Sarava still resides.

Which brings us back to Rich Strike.

To be sure, rest is in the best interest of Ritchie before he takes on what is likely to be a formidable field in this year’s 1 1/2-mile “Test of Champions” at Belmont.

But history also suggests this Preakness is one dance he’d best sit out.