Horses That Drink and Pee Too Much

Home > Blog > Health > Horses That Drink and Pee Too Much 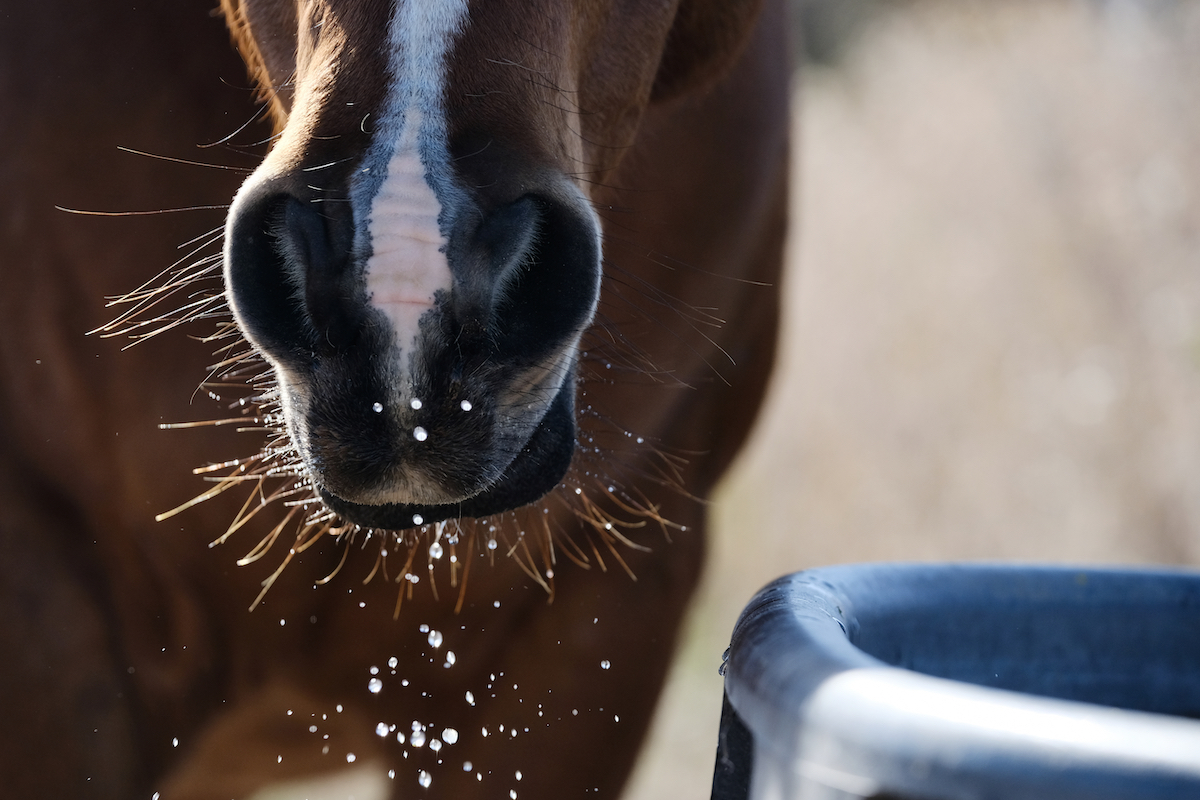 So… your horse is flooding the stall.

He takes a drink every time you take a look at him. You are single-handedly keeping the bedding company in business. There are puddles of piddle. Worried that something might be wrong?

ASIDE: If all you’re reading this for a couple of pee jokes, urine luck.

Well, there certainly could be some sort of a serious problem—but maybe not. Let’s talk about one of the more annoying—and not uncommon—concerns that horse owners may have about their horse, that is, excessive drinking (it’s called polydipsia in medicalese) and excessive urinating (polyuria). Or, to use the common acronym that we veterinarians so love, PU/PD.

Normally, the two go together.

Of course, that makes a good bit of sense when you think about it. If a horse is drinking all the time, all that water does have to come back out. On the other hand, if the horse is peeing all of the time, he’ll have to drink a lot to keep up. Otherwise, with not enough water coming in, or too much going out, he’d shrivel up like a prune (physiologically speaking). The question usually isn’t “whether” a horse has PU/PD, it’s “why?”

Before you worry that your horse is overdoing it at the waterer, you should probably know about a normal horse’s water consumption. An average-sized horse, say around 1,100 pounds (500 kg for those of you metric folk) will drink something along the lines of 13 gallons of water every day (or 50 liters, which, as it turns out, is also about how much blood he has in his body).

All that water has to go somewhere, so this normal, average horse will produce around 2.5­–four gallons of urine every day (10–15 liters). Of course, these are just averages. There are many factors that can change normal, average consumption, such as exercise, or hot weather, or sickness, or pregnancy.

Too much of a good thing

As you might imagine, all of that urine can create a big, smelly lake in the horse’s stall or paddock that, while also being somewhat smelly and disgusting, is also a big logistical pain in terms of keeping living areas clean and dry.

When we have to deal with all this weewee, this obvious question is, “What’s going on?” Here are some possibilities.

As it turns out—and this should not come as a great surprise to anyone—sometimes some horses may consider their life to be a bit of a bore. Bored horses, like bored people, often look for things to help them pass the time. This can manifest itself in any number of what get called “stall vices” such as crib biting or stall weaving (“vices,” as if it’s the horse’s fault that he’s cooped up in his stall all the time).

Of course, there are other things that can drive excessive water consumption.

Stress may be one of them—changes in housing or environment are credited with starting horses down the (muddy) path of too much water consumption. Dietary factors can sometimes be an issue, for example, the horse that passes his time eating his salt block is going to get awfully thirsty as a result.

When you do a medical workup on horses that drink water to pass the time, they’re otherwise normal. In such horses, urine tests and blood tests are unremarkable (well, the urine gets dilute, but that’s about it). The horses tend to be in good body condition, too. Too much water consumption isn’t harmful to the horse, it’s just really messy.

Historical aside: Urine is in the medical pharmacopeia (pause) of many cultures throughout history.

If you’ve got an old horse—and particularly if you have an old horse with a long, curly hair coat that doesn’t shed—he might be drinking too much because of a benign enlargement of his pituitary gland (commonly known as Equine Cushing’s Disease).

While most horses with Cushing’s don’t drink excessive amounts of water, a decent minority may (perhaps as much as a third of them).

By the way, PPID stands for Pituitary Pars Intermedia Dysfunction, which is one reason why the abbreviation is so popular, and also why everyone calls it Cushing’s. The diagnosis of PPID is usually confirmed with a blood test, of which there are several.

Compared to other species—say, cats, in which they are something of a species feature—kidney problems in horses are quite rare. Kidney problems happen in horses, but they usually occur secondary to some other cause, like an exposure to toxins, drugs (which, in some instances, can act like toxins), muscle problems (which release toxic muscle pigment into the kidneys).

Foals may have the occasional developmental abnormality that results in kidney problems, and their young kidneys are more easily injured than those of older horses. The list of drugs that can cause kidney problems is disturbingly long—bisphosphonates, non-steroidal anti-inflammatory drugs, aminoglycoside antibiotics, and oxytetracycline, to name a few. Fortunately, reports of serious kidney problems are rare.

Aside: Medical scientists have discovered that if you drink more water, you’ll live longer. Unfortunately, the additional time is spent in the bathroom.

Much as in other species (e.g., us) kidney problems can develop in older animals. However, you might not even notice them.

While older horses with kidney problems can be sometimes be seen to drink and urinate more frequently than normal, they can go for a really long time without apparent problems and without additional treatment. I’ve followed older horses with reduced kidney function for as long as seven years (at which time they died from some other problem).

When the kidneys fail completely, water consumption is the least of the horse’s problems. Horses in complete renal failure are in serious metabolic trouble. They start losing weight and appetite and they can develop signs such as oral ulcers or blood in the feces. There’s no real treatment for the problem (dialysis in horses would be quite a feat, I think).

Diabetes and other diseases

While diabetes—a disease where the horse’s body’s ability to produce or respond to the hormone insulin is impaired—is relatively common in cats, dogs, and people, it’s is a really rare bird in horses. There are actually two types of diabetes, but as rare as the problem is, you’re likely never to see it. (I never have).

Honestly, if, as part of a workup for your horse that’s drinking and urinating all the time, you discover that your horse has some type of diabetes, you should consult with an expert in equine medicine. But don’t worry about it until then.

There are also diseases that can cause horses to urinate excessively that have nothing to do with the kidneys. Cancer, various inflammatory conditions, and liver disease can all be associated with increased drinking and peeing. It’s always something.

Lastly, a horse can pee excessively for a little while without it being a big problem. So, for example, diuretics are supposed to make a horse urinate, and relatively quickly. Certain sedatives can make a horse urinate (and sweat, as well)—if you sedate a horse to clip him, for example, and you may have to deal with a mess pretty quickly thereafter. This isn’t a real problem: just a surprise if you don’t know it’s coming.

1) He probably won’t be so bored and
2) You’re probably not going to notice if he’s peeing too much anyway.

If, however, your horse is in a stall, it’s not that hard to measure how much he’s drinking in a 24 hour period (trying to measure how much is coming out is another thing entirely, and, frankly, unless you have a spare wetsuit, I wouldn’t worry too much about it).

If he is drinking too much, blood and urine tests (ask your veterinarian) can let you know if there’s a real problem: a kidney problem, a Cushing’s problem, or some other problem. Or, perhaps, they will tell you he’s normal, just bored (most are).

Like everything, the treatment for an incessantly drinking horse will depend on the cause. If it’s behavioral, trying to do things to change the environment can help: more time in turnout (which is good for him anyway), a companion, toys… there are lots of possibilities. If there’s some other problem, you address that.

So there. While, in my experience, most horses that drink and pee all the time are doing it to help pass the time, sometimes there’s an underlying problem. And, sometimes—in cases such as horses with chronic kidney disease—the drinking actually helps them compensate for their bad kidneys. It can be complicated, which is why you want to work with your veterinarian.

It’ll all come out in the end.

This post originally appeared on doctorramey.com and is reprinted here with permission.