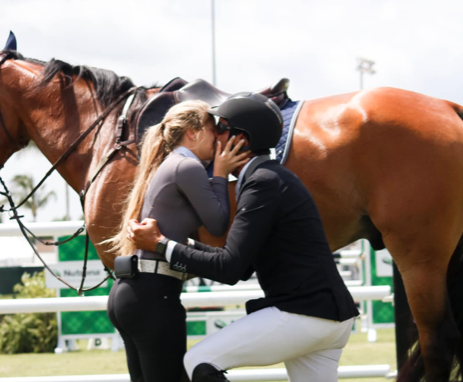 For riders, weeks of preparation for two minutes in the ring is a familiar stress. But these weren’t typical horse show nerves.

It would be perhaps the most life changing round of Martinez’s life, yet he didn’t plan to take even a single jump. With a square box in his pocket, his soon to be fiancé Katherina Sciuto on the sidelines, he had a different plan altogether.

“There was no Grand Prix that I’ve ever been that nervous to walk into,” said Martinez of last week’s ESP Spring Series Grand Prix at Global.

The idea of a horse show proposal might be every equestrian’s dream, but for Martinez and Sciuto it began as a playful joke.

“It all started at the show because Katherina and I talked about how cool it would be to win a Grand Prix at WEF and then get engaged. It was like half-joke, half-serious,” said Martinez.

As the idea evolved into intention, it turned reality with the help of some friends. Friends, like the management at Wellington International, who as it turns out can plan more than just a horse show.

“Word spread around the show.”

“David Burton, Jr., the show manager, was always joking with me [during the 2022 winter season]. If I was going into a Grand Prix, he would be like, ‘Did you bring the ring?’ That was the running joke through WEF.”

Sciuto is the acting manager at boarding, sales and training outfit Antonio Martinez G. Equestrian LLC in Wellington, Florida. Horses are what they do together, so incorporating them into the proposal only made sense.

Over the course of the season, the idea hung in the back of Martinez’s mind. After the winter series concluded, Burton grew impatient, offering to take the reins on organizing this equestrian storybook moment.

“When I finally decided to take the step I talked to David and Ally, the FEI Steward, again. We are always around the ESP team, they are our horse show family and it felt right to include them. So, it started out with them teasing me and then it became reality,” said Martinez.

Come the ESP Spring 5 show in May, he was ready to pop the question.

“I almost had to cancel.”

While the original thought was to propose right after jumping the Grand Prix, planning got complicated. Martinez would need to go last so not to disrupt any the other competitor’s timing, yet management couldn’t choose where to put him in the order as it would be unfair.

“I almost had to cancel. I didn’t have a great result in the Welcome [class that week] actually, so I decided not to jump the Grand Prix. My best friend, though, was in town and was going to leave after the weekend. I wanted him to be there, so we started talking about doing the proposal somewhere else,” explained Martinez.

Martinez then told Sciuto he had changed his mind about not jumping the Grand Prix, saying they knew the horse jumped better than that and likely just had a bad day in the Welcome.

“[The ESP team] said we’re going to make it happen, and could put me last now because they knew I wasn’t going to show,” said Martinez.

“I’m glad it happened that way because I would have been way too nervous to actually show.”

Martinez told Sciuto that they were going to have an interview with a sponsor in the afternoon, so to try and wear something nice because right after work they’d be doing photos and videos *wink*.

“I did the whole thing. Got dressed and walked my course. The horse got there like eight out, and by the time I got on I was like six out, so I had to play up the fact they were late. I did the whole spiel, like ‘Hey, what the heck, you guys were late!'” laughed Martinez.

Martinez might have done a good job maintaining his act with Sciuto, but the rest of the show was in on it.

“Everyone was involved, all of the ladies in the office, the managers and the stewards. They made me a huge, probably 12-foot sign that said ‘Will you marry him?'” said Martinez.

The horse Martinez was riding, Forman De Virton, is especially sentimental for Sciuto because the 11-year-old gelding is recently back in the ring after a long recovery from an injury.

“I told her right before I went in that the horse wasn’t feeling totally right, I said, ‘Please, just be aware in case I call you because I don’t feel we’re 100%.’ When I walked into the ring I just stopped, and that’s when I waved her over and she sprinted all the way down,” said Martinez.

Martinez and Sciuto were assessing Forman’s legs while the others struggled to open the massive sign. Eventually, when the scene was set, Martinez pointed it out. But the diligent horsewoman remained focused on the horse.

“She looked at the sign and just turned back to the leg and paid no attention to it. She was like, ‘What’s wrong with the horse?’ and I was like ‘Can you look over there again please?!”

“After almost having a heart attack because I thought our horse was hurt, I ended up saying yes to my partner in crime. Thank you to everyone who got to share this special moment with us and to the people who made all of this possible! Antonio Martinez Te amo! You made this such an incredible memory,” Sciuto wrote to Facebook.

The Grand Prix field was filled with tears, hugs and celebration. This time, not just for sport. One thing we know for sure is Martinez has set the bar high for his colleagues.

Your move, other riders.