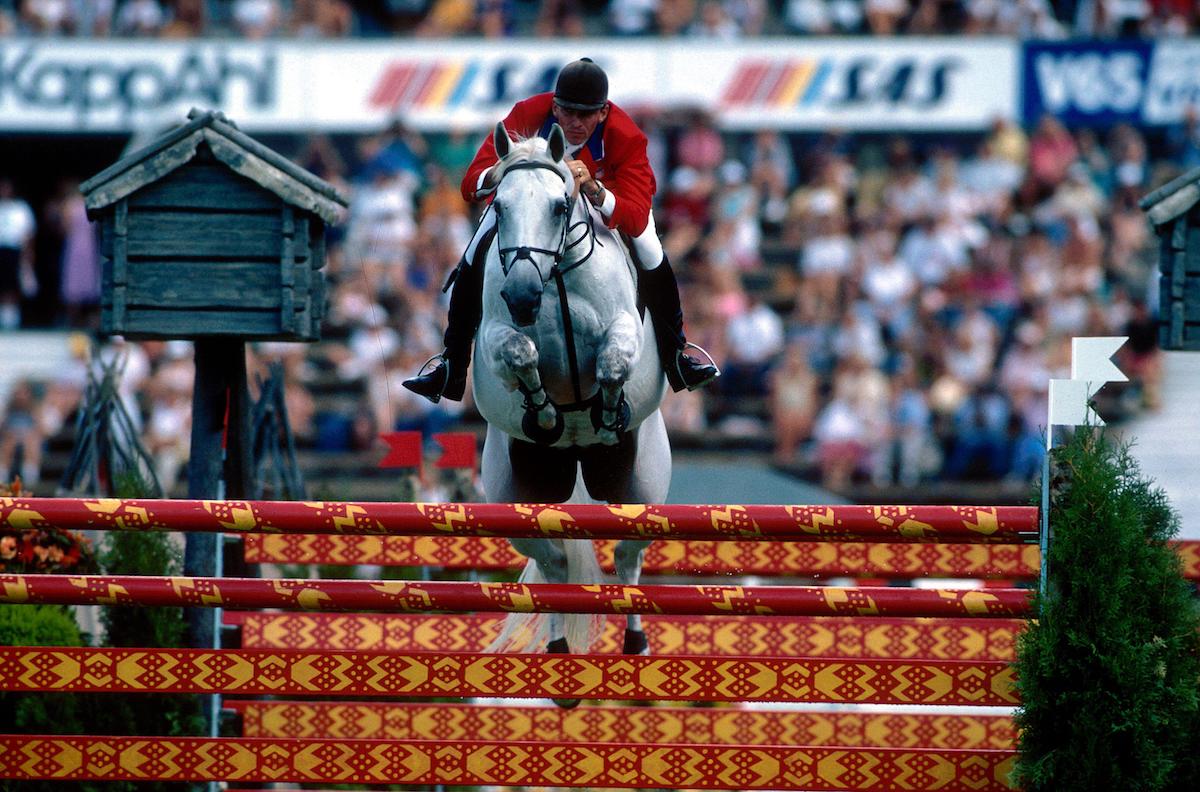 Each week on #HallOfFameThursday, Horse Network recognizes members of the Show Jumping Hall of Fame with an inductee’s plaque, historical photos and, on the first Thursday of every month, an historic article about a Show Jumping Hall of Famer. This week’s featured inductee is Gem Twist, Class of 2002, as memorialized in an article by Hallie McEvoy in the 1997 program of Lake Placid’s I Heart New York Horse Show.

Lake Placid horse show fans join show jumping fans across the country in fondly remembering Gem Twist (“Gem”), the most popular jumper of the past decade who retires this year. Gem Twist won the 1987 Lake Placid Grandprix and the 1991 I Love New York Grandprix. Many fans recall his thrilling jump-off rounds in the face of extremely strong competition.

Gem Twist, now 18, excited fans the world over with his bold jumping style, kind personality, and gray, handsome good looks. Not since the 1970s, when the great Idle Dice captured the public’s imagination, has a horse so charmed the horse show world. Gem Twist can be found on posters, t-shirts, and in books and magazines. His worldwide popularity equals that of Canada’s Big Ben, and Great Britain’s Milton, two of his principal adversaries in international competition.

Each of the past five decades has given us horses who could be considered among the greatest of all time. The ’80s gave us Jet Run, Touch of Class (Olympic Gold Medal with Joe Fargis), and the recently retired For the Moment (nicknamed Fred). Sympatico, Sloopy, and Idle Dice (nicknamed Ike) lit up the 1970s. Kathy Kusner’s incomparable Untouchable, and Snowbound, the first American Olympic Gold Medalist in the equestrian events, were the best of the 1960s. Trail Guide and Riviera Wonder were brilliant jumpers for the USET in the 1950s, although sometimes overshadowed in popularity by the rags to riches story of Snowman, and Nautical, Walt Disney’s Horse With The Flying Tail. The 1940s started the popularity of show jumping in this country with the rise of Democrat and Miss Budweiser (also known as Circus Rose). Gem Twist is arguably the best of this spectacular group of horses.

Gem Twist (registered name lcey Twist) descends from a brilliant line of show jumpers. His sire was Good Twist, Frank Chapot’s United States Equestrian Team (USET) mount in the late 1960s. This gray Thoroughbred won 21 international classes in Europe and North America, and is remembered as being a fast and careful jumper.

Good Twist was a grandson of the legendary Bonne Nuit, whose name is synonymous with jumping talent. The pedigrees of many of the best jumpers in the world reveal Bonne Nuit bloodlines. Horses with Bonne Nuit blood such as Riviera Wonder, Miss Budweiser and Night Owl, are known as careful, clean jumpers.

Michael Golden bought Gem Twist as a three-year old from breeder and six-time Olympic rider, Frank Chapot. He hoped to turn Gem Twist into his personal mount. Realizing the horse had more athletic potential than he could develop, he turned the horse over to Chapot for further training. Gem quickly proved his skill and bravery in the jumper ring.

Under the guidance of Greg Best, Gem captured the American Grandprix Association (AGA) Horse of the Year award in 1987, 1989, and 1992. No other horse has duplicated this difficult feat of winning three Horse of the Year titles. Gem also carried Best to the AGA Rookie of the Year title in 1987, and they received a Silver Medal in the Pan American Games that same year. The highpoint in the partnership between Best and Gem came at the 1988 Olympic Games in Seoul, Korea. Competing against the top horses in the world, Gem and Best came away with two Silver Medals. These Olympic medals energized American fans and made Gem Twist and Greg Best horse show celebrities. More acclaim and honors followed when Gem was named the World’s Best Horse at the 1990 World Equestrian Games.

In 1992, Best broke his shoulder in an accident at the Gold Cup and was unable to ride for the rest of the season. Olympian Leslie Burr Howard jumped into the saddle and continued Gem’s success. Burr Howard showed Gem to enough success to clinch his third AGA Horse of the Year Award.

Laura Chapot, daughter of Frank, took over the reins in 1995. That year, Laura and Gem won the World Cup Class at the $100,000 Autumn Classic, helping propel Chapot to Budweiser Rookie of the Year honors. In the 1995/1996 season they won three Volvo World Cup qualifying classes and placed well at several other competitions. Their win in the final World Cup class was over the largest starting field ever (80 horses) and clinched Laura the East League Championship and a new Volvo.

Over the course of his career, Gem Twist accomplished feats that few other horses can match. He won the Budweiser AGA Championship three times, in 1987 with Greg Best, in 1993 with Leslie Burr-Howard and following the 1995 season with Laura Chapot. Gem is the only horse ever to win this competition under three different riders.

In late 1996, owner Golden decided that it was time for the great horse to retire. “It was Frank (Chapot) who told me that Gem Twist would tell us when he no longer wanted to compete,” said Golden. Golden felt that the message had been sent, and plans to retire Gem Twist were made. Gem Twist’s farewell tour began at the USET Grand Prix in West Palm Beach, Florida. He then appeared in Tampa during the Budweiser American Invitational.

Retirement for Gem Twist will be in Neshanic Station, New Jersey, at the Chapot family farm. It is somehow fitting that this great horse will retire to the farm where he and his ancestors were bred. Gem Twist’s final gift to the sport of show jumping will be the thousands of fans whose lives he touched the world over. There is no greater legacy than this.