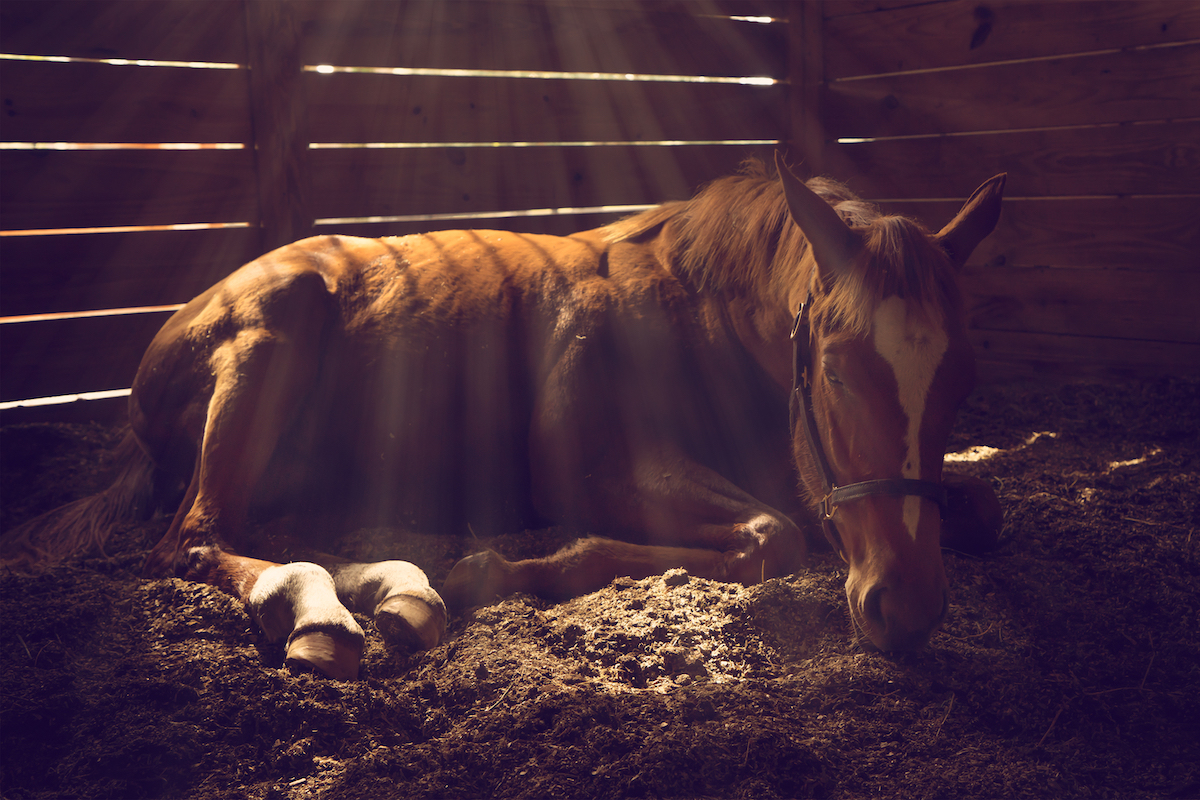 One of the more common phone calls that I get is from a concerned horse owner who also happens to own a thermometer.

I’m here to tell you that I think just about every horse owner should have a thermometer, because from it often comes some information that they can pass on to that’s really helpful.* So, for instance, if a horse isn’t eating (which owners notice), and the owner can take his temperature (which horses notice, some of them a lot more than others), and if the temperature is elevated, then part of the problem is solved (horses usually don’t like to eat when they have a fever).

ASIDE: I say part of the problem because fever isn’t the problem, it’s a clinical sign that occurs because of some primary problem. See below.

When horses have fevers, they don’t eat. And that’s usually not that big a deal, at least in the short term.

In most cases, insofar as handling the situation goes, the bigger problem is that when horses have fevers, their owners panic. So, in an effort to help ease the almost inevitable, and completely understandable, human anxiety that accompanies an equine fever, I figured I’d write something.

First off, you probably need to know what a normal body temperature for a horse is. So as to save you a few minutes of Googling, it’s between 99.5 and 101 degrees Fahrenheit (you can find different ranges, but that’s pretty much my experience).

If you’re just about anywhere else in the world but the United States, that’s roughly 37 to 38.3 degrees Celsius.**

A fever, of course, is defined as any body temperature higher than the high end of normal. In people, once the temperature gets even half a degree above normal (normal temperature for people is, of course, 98.6 degrees Fahrenheit, and in Celsius… oh, never mind – check out the second footnote if you must know), they start to feel it.

Horses, however, tend to be a bit more dramatic with their fevers.

IMPORTANT ASIDE: If your horse has a fever of 104.5, there’s definitely some sort of a problem, but it’s unlikely he’s dying.*** He needs attention, for sure, but unless there are other dramatic signs, it’s probably not an emergency. Please use the appropriate voice level on the phone, accordingly.

“Why is it that they get a fever, or why does it get so high?” I respond.

Fevers are caused by biochemical substances called pyrogens (the word comes from combining the Greek roots pyr, fire, and genein, to produce). A structure that sits at the base of the brain called the hypothalamus is in charge of regulating the horse’s body temperature. Pyrogens are produced by the body in response to an infection (say, from a virus); other disease causing agents, such as bacteria, produce pyrogens as products of their metabolic activity.

Either way, when the hypothalamus detects elevated levels of pyrogens, it tells the body to make and keep heat. Bingo—your horse has a fever.

If you really like this sort of discussion, you can read about how fevers are produced in a nice Scientific American article from a few years back.

2. Why do horses typically get such high fevers, the ones that worry us to death?

The answer to this comes from geometry. (I think. I’m pretty sure it’s not algebra or calculus, and I’ve forgotten most of that stuff anyway.)

Horses have a terrible time getting rid of body heat.***** For among other reasons that’s simply because they are big animals, and geometry works against them. In particular, the geometry that we’re talking about is the relationship of the surface area to volume.

So, if you’re, say, a hummingbird, with a little bitty body (small volume), there’s a lot of surface area available from which you can lose (radiate) heat. Hummingbirds have to work really hard to stay warm, which is one reason why a blanket or sweater would make a great present for your friend’s hummingbird.

Horses, on the other hand, have a hard time getting cold. They don’t have much surface area relative to the volume of their bodies, and so they don’t radiate heat well. This small surface area is one reason why many horses act like such idiots when the temperature drops into the 40s—they aren’t feeling overheated.

It’s also a reason why blanketing your horse really isn’t very important, especially if you live in southern California (Here’s an article I wrote about that).

And, to get to your question, their poor ability to radiate heat is one big reason why, when pyrogens start floating around in your horse’s bloodstream, they not only get a fever, that get a big fever. A fever that panics their owners.

So far, I’ve avoided the important question: “If my horse has a fever, what should I do?”

The first thing to remember is that fever is not a disease. Fever is caused by a disease. You certainly would like to get rid of the fever; if you can do that, your horse will feel better, and you will, too.

But when it comes to getting rid of a problem, it’s always best to treat the cause rather than the problem itself; in fact, if you treat the cause, the problem will almost always go away (this is sort of a universal truth, actually). So, for example, if your horse has a bacterial infection somewhere, he’ll develop a fever. Kill the infection with antibiotics and the fever will go away.

That said, there is some discussion in the medical community about whether a fever should be treated at all. “After all,” so one side says, “A fever is the body’s natural response to an infection. The elevated body temperature makes the horse’s body a less hospitable place for the infectious agent to live. Fever is your horse’s friend.”

The other side says, “Yeah, well, why in the world would you want to feel awful for any longer than you have to?”

And, to be honest, there’s no consensus in the medical community about what to do

In my opinion, while the, “Fever makes the horse a rotten place for the bugs to live in and therefore you shouldn’t treat it” argument makes some medical sense, in my experience, it’s pretty hard to convince a concerned horse owner of the merits of that argument when they are standing there fretting over their horse who has no interest whatsoever in his hay.

So, I tend to find myself on the side of trying to get the horse feeling better, in addition to trying to identify and treat the cause. I mean, you don’t want to only try to lower the fever, you also want to try to get to the cause. But I haven’t found any real harm in trying to lower a horse’s body temperature, so (finally), if a horse has a fever, here’s what I tend to advise my clients to do.

1. Call. Get me out to examine the horse (or, if I’m not your vet, call your vet). Most fevers aren’t serious, but all of them at least merit attention.

2. Treat the problem (if you can figure out what the problem is). If, for example, your horse has a bacterial infection, treat the infection. Or have a blood test drawn to see how the horse’s body is doing. Vet stuff.

3. Do stuff to help control the fever. The two things that seem to help the most are: a) Non-steroidal anti-inflammatory drugs, such as phenylbutazone (“bute”) or flunixin meglumine (most commonly known as Banamine®, even after all these years), and b) a cold bath. (We used to think it was important to followed the bath with a thorough scraping to remove the excess water but that’s been shown not to be important.) Here’s why: the drugs work to lower fever directly, and the water treatment causes cooling as the water evaporates.

* A lot of things that I get told don’t really help all that much. Like, “Dr. Ramey, my horse is limping. I think it’s his left front hock.” In this example, I’ve been told something, but it’s probably also not something that the person would also want me to know (e.g., “I don’t really know very much about horses”). Also, the information wouldn’t really help much, even if horses did have left front hocks.

** If you are feeling particularly geeky, and you want to do the conversion from Fahrenheit to Celsius and back, CLICK HERE, but don’t tell anyone you did it unless they know you really well.

*** If he has a fever, and he also shows signs of colic, it’s particularly unlikely that his colic will require surgery. Not impossible, but pretty unlikely. That’s what the studies say. How do you know if your horse needs colic surgery? CLICK HERE to find out.

**** They can’t pant, like dogs. They can’t hold their ears out, like elephants. They can’t burrow into holes, like the lungfish of Africa, Australia and South America. Horses just sweat and breathe fast when they are too hot.

***** I’m sorry about that sentence. But I did explain it afterwards.

This article originally appeared on DoctorRamey.com and is republished here with permission.