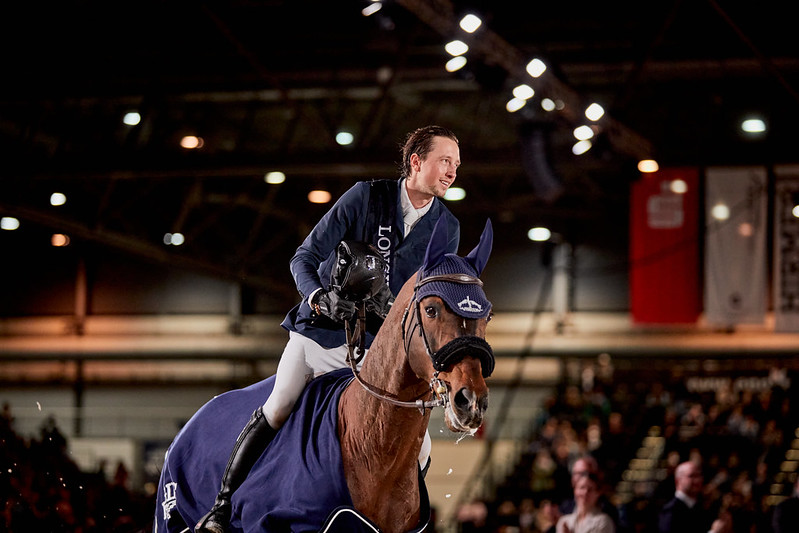 Fuchs is currently No. 3 on the Longines World Ranking, and the wave of success is a testament to his skillful adaptability on a variety of top horses. However, he passes all the credit for this momentous win to 15-year-old stallion Chaplin, a special horse by his own description.

“I didn’t ride very well to the planks and he just gave me his best,” said Fuchs.

“He’s such an unbelievable fighter. What a great horse, he gives everything every time he enters the ring and I’m just so happy to have a horse like that.”

The pair won Friday’s opener, the Final I (CSI-W) ‘speed and handiness’ 1.60m leg. Then, Fuchs employed a little strategy to ensure Chaplin was in top form with abundant energy going into today’s final. The Swiss champion tapped in 14-year-old gelding The Sinner for the second leg, becoming the first World Cup Finalist to have won the championship using two different horses.

“I have to say the plan worked out perfectly. The Sinner did his job on Friday, even though he had a rail down, he was really good in the Friday class. And then Chaplin, a win the first day and two clear rounds today, I couldn’t have asked anything more of these horses,” said Fuchs.

Ask any top rider, and they’ll tell you that winning championships takes a village. There’s a team running the operation behind-the-scenes, who watch from home with bated breath or kick at the air in the kiss-and-cry.

“It’s not just me or Sean [Vard, Fuch’s groom], it’s the whole team around us, everybody that’s supporting us also at home. It’s just fantastic to have a group of people and a group of horses to perform at the best shows,” said Fuchs.

Fuchs has come close to winning the Finals before

The last FEI Jumping World™ Cup Finals 2019 in Gothenburg, Sweden, Fuchs was nudged to second place on the podium by Steve Guerdat (SUI). While he might have had confidence in his own plan today, when you have a lineup that includes the likes of Harry Smolders (NED) and Mclain Ward (USA), sometimes you just have to hope you have a better day.

“I must say I thought I would be second again with Harry and Mclain coming after me,” Fuchs laughed, “Obviously today I was lucky that they had the rail down, and I’m very delighted with this win.”

Though Smolders felt he didn’t have all the luck today, he’s proud of 13-year-old gelding Monaco’s second place result.

“It’s Monaco’s first championship. He was really fantastic all week long. He was in a great, great shape, though it didn’t quite go our way. We were a little bit unlucky in the jump-off the other day, but second is still an amazing spot,” said Smolders.

“Chaplin is such a trier, and he pulls it off.”

The Swedes, not ones to miss out on a distinguished podium, swiped the third place spot. Jan Fredricsson (SWE) followed Smolders with 11-year-old gelding Markan Cosmopolit, also finishing out on an eight fault score.

Ward and Contagious, winners of Friday’s 1.55m, Longines Fei Jumping World Cup™ Final II (CSI-W) had a tough track around the Frank Rothenberger designed course today. They dropped two rails and collected a time fault on along the way. Ward landed 7th in the overall rank.

The two young guns put the British flag in the top 10. Twenty-three-year-old Harry Charles (GBR) and 20-year-old Jack Whitaker (GBR) took the fourth and fifth spot respectively. For Whitaker’s first World Cup Finals appearance, his goal was simple: “keep going, and try to jump clear.” With that finish, it looks like he exceeded expectations.

Up and down day for the Americans

Americans hopes were dashed in the fourth and final round when World Cup Finals veteran Mclain Ward, then leading with his Olympic mount Contagious, stumbled on landing after the A element of the triple combination and dropped the B element, handing Fuchs the win.

“It’s really disappointing of course. I thought Contagious jumped great and unfortunately, he stumbled or lost his footing in the combination and fell through B and after that when you’re focused on winning, not much else matters,” said Ward. “It’s a sport of variables and he took a funny step and jumped too low, which isn’t a normal mistake for him, but you know that’s a part of the sport and it’s unfortunate when it happens in that moment.”

Ward and Contagious finished as the highest-placed American pair in seventh.

Eyes on the future