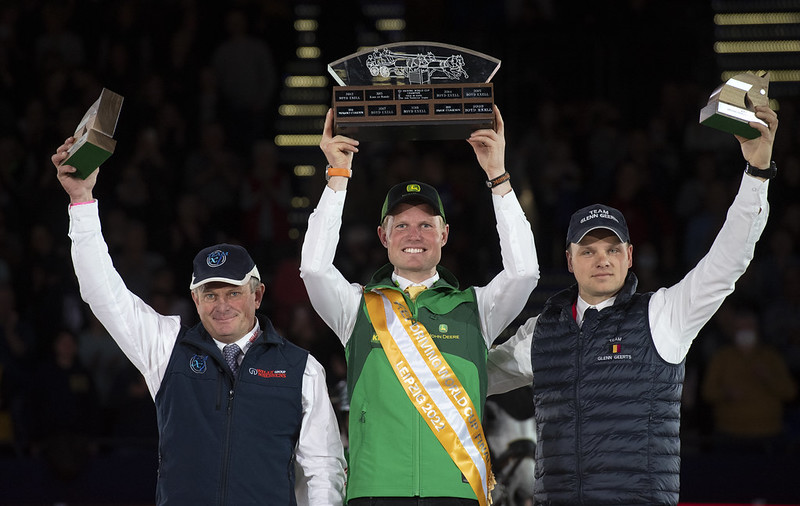 Australia’s Boyd Exell and the Netherland’s Bram Chardon might be each other’s biggest threat in the ring, but, ironically, it’s that same competitive dynamic that pushes them to win titles.

The two have been volleying the FEI Driving World Cup Finals title back and forth since 2019. Chardon won the 2019 Finals in Bordeaux, then Exell in London in 2021, and back to Chardon this past week in Leipzig.

One is the 50-year-old driving legend, five times World Equestrian Games Champion and nine times FEI World Cup Champion. The other, a 29-year-old building to the crescendo of his career. Their yin and yang energy makes for an interesting match.

“Yeah, it was a good fight. Bram’s young, keen, and hungry, and it pushes me,” said Exell of Chardon’s Leipzig victory.

Chardon’s World Cup team consisted of four white horses, his sister and navigator Lianne Chardon, and back-stepper Maurits Hallo. If you’ve ever watched the sport of driving you’d know it’s not your peaceful carriage ride through Central Park. If you haven’t, it’s easier to show you. Hang onto your carts.

Obstacle cone driving, the element we see in the World Cup Finals, consists of an intricate course where the team must navigate different obstacles and is judged based on speed and accuracy. Tennis balls perch precariously atop the cones, and knocking one off results in a four-fault penalty.

Sunday’s competition included two rounds, the second of which being a drive-off.

After combining time and penalties from the first round only three teams advanced to the drive-off round; Exell, Chardon and Glenn Geerts (BEL).

Geerts tested the course first, picking up eight faults for balls and 10 faults for a missed gate. He was left on a total time of 323.73 seconds. Exell also collected four additional points at the end of the course which, in the end, cost him too much time. He finished on 262.82 seconds.

“I got a little bit out of balance coming to the bridge, but any place on the podium’s a good place,” said Exell.

While Chardon also had the slightest miscalculation at a cone that resulted in four points added, his speed of 258.72 proved to be enough to take the win.

“Like two years ago he [Exell] pushed me very hard, but I did it,” said Chardon.

He might be pushed hard when contesting a legend like Exell, but Chardon is also legacy. Chardon named as the most influential person of his life and career, his father Ljsbrand, a 27-time Dutch Champion, four-time World Champion, and three-time FEI World Cup Driving winner.

So, as they say there are no big battles without big opponents, but when you have the right training and support system anything is possible.

“I had an unlucky mistake, but it worked out. It’s the fitness of my horses that brought me to victory,” finished Chardon.