Horseradish Isn’t for Horses and Other Ironies

Home > Blog > History > Horseradish Isn’t for Horses and Other Ironies 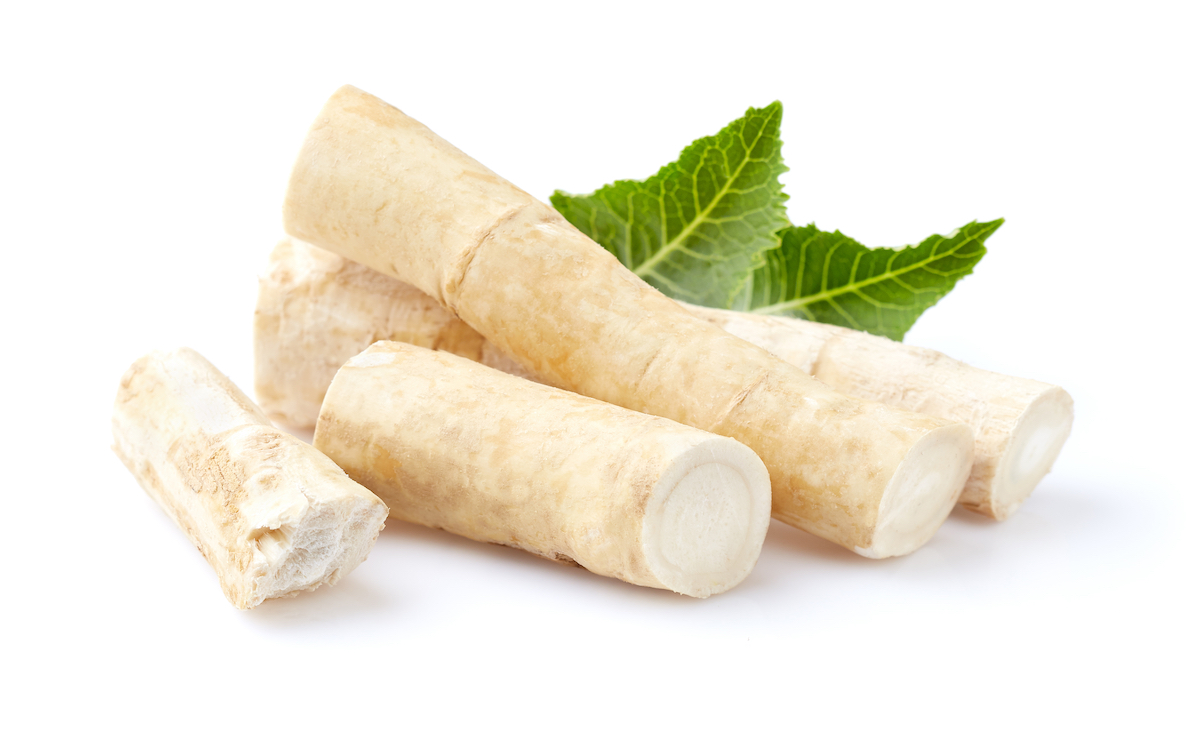 Naturally, I’m drawn to the vegetable horseradish. A root vegetable no less.

My initial interest was the name, why “horse” radish instead of say, “cat” radish? As usual, I entered one of my #horsewordnerd investigates scenarios and found myself learning more than anticipated.

We’ll start at the beginning because that is always the best place.

For this answer, we turn to our German comrades who call it “meerrettich” (sea radish) because it does indeed grow organically by the sea. Many believe that the English mispronounced meerrettich, which looks easy enough to do, and called the meer part “mare” radish. Eventually it morphed, as with all things involving words, and became horseradish.

Some say the horse part of the word was often added to things that were large, strong and coarse, a figurative adjective if you will. This addition to words was popular in the 1800s and we now have such things as horse mushrooms, horse mussels, horse parsley and horse balm.

We also have, and this one is a little surprising, horse godmother. That in itself is fine, it is the meaning that is off-putting, “A larger masculine wench; one whom it is difficult to rank among the purest and gentlest portion of the community.” Well, it’s clear the 1800s were a different time.

Horseradish has been springing up as far back as 1500 BC and apparently, the Greeks used it as a backrub, like A535 I guess, though how anyone knows that is a wonder. Horseradish is thought to help with arthritis, doubles as an aphrodisiac and is a handy diuretic that doesn’t take potassium with it in its wake. Horseradish is also a natural antibacterial, boosts circulation, helps with digestion and improves respiratory health. Is there no end to the merits of horseradish?

Though horseradish was used as a condiment in Central Europe it didn’t find its way onto the dining tables of the English until the early 1600s—even then, it was only consumed by laborers and farmers. But the allure was too great and by the end of the century, all of England was dabbing the sharp, spicy sauce onto their beef and oysters. It took another century or so before horseradish reached the New World.

The merits of horseradish end, ironically, with horses. This vegetable that is so handy for us humans is poisonous to horses. Horseradish contains vitamin C, asparagine, resin and sinigrin and it’s the sinigrin that gets converted into mustard oil that is poisonous to horses. This, of course, happens once digested. The plant, thankfully, isn’t favored by horses or herbivores due to its built-in chemical defence of isothiocyanates that deters unwarranted attention.

This same type of poisoning extends to other plants/vegetables in the Brassicaceae family, which include broccoli, cauliflower, Brussel sprouts, mustard and collard greens, kale, cabbage, rutabaga, wasabi, turnip and, though not the end of the list, watercress.

There are several signs your horse may display if they have ingested horseradish; however, these signs and symptoms are common enough that they could be indicating a different problem entirely. Nevertheless, keep your eyes peeled for signs of gastroenteritis (colic), salivation, diarrhea and weakness. Though the more alarming indications are loss of coordination and disorientation.

The ASPCA has created the longest list in the world of all the things that are toxic to horses as well as your cats and dogs. Horseradish, curiously, isn’t on the list, so I searched for radish and that gave information on isothiocyanate poisoning. This list could prove to be very helpful if you are worried one of your animals has ingested something they shouldn’t have.

You can enjoy horseradish and its medicinal properties until the cows come home, just don’t let your cows or your horses eat any. And to be fair, if you eat too much of it yourself, you will wish you hadn’t. Horseradish isn’t to be trifled with.