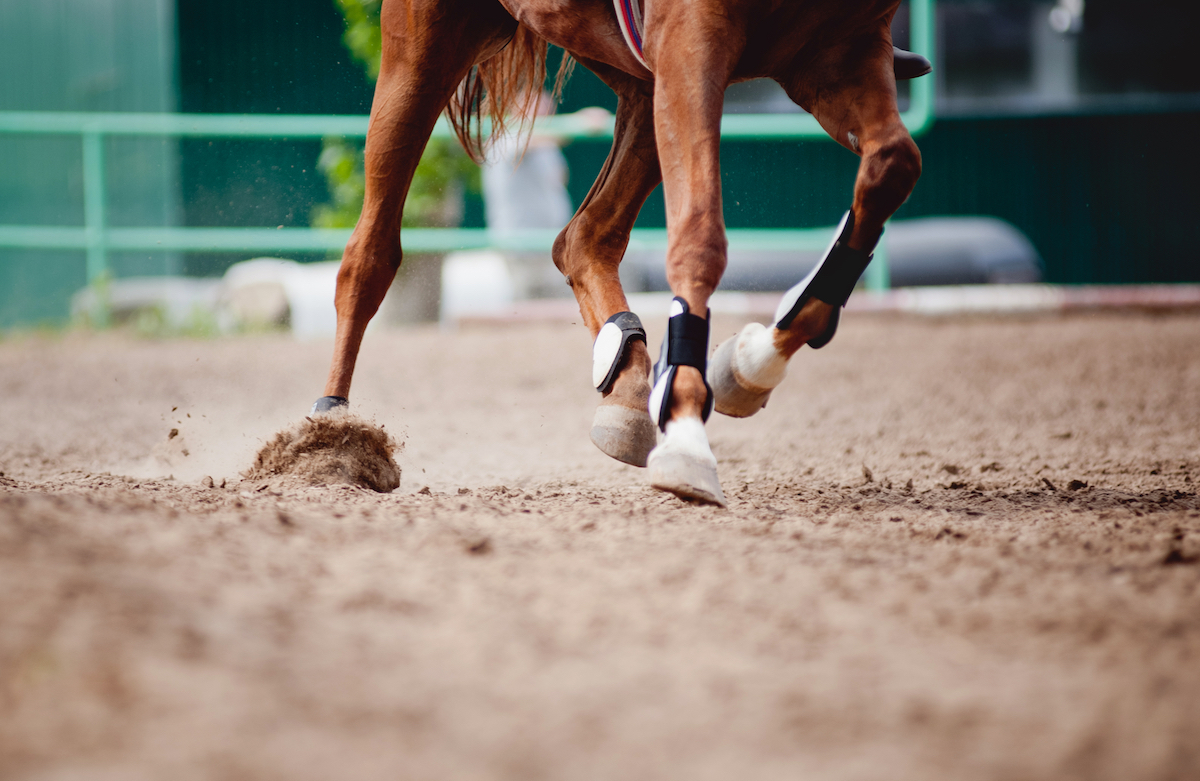 I am constantly amazed at people’s taste for “natural.”

I mean, really, humans have spent most of their civilized life trying to get away from natural. Now, it’s constantly being used as an advertising vehicle. I mean, seriously, who yearns for the good old “natural” days of sleeping in a cave trying to stay warm under a bear skin that you obtained at the cost of your best friend whose his spear wasn’t sharp enough? Personally, I like heated rooms. Oh, and indoor plumbing rocks.

Nevertheless, in the past couple of decades or so “Natural Balance” horseshoeing has become something of a rage, and certainly an industry. There are other ways to describe the technique, such as “four-point” shoeing, extreme breakover, or setting the shoe back. Regardless, the premise is that horses in the wild wear their hooves a certain “natural” way, and that the “unnatural” circumstances of captivity—that is, free of predators, and with plenty of good food, which, come to think of it, doesn’t sound that bad, particularly if you like to eat like a horse, and aren’t wild about being eaten yourself—have resulted in them somehow being subjected to the slings and arrows of outrageous and unnatural hoof-shaping. Or something like that.

The operating premise in the “Natural Balance” approach is that horses in the wild are purported to have short toes, and fairly upright feet. Left to their own devices, horses will have the foot that they are “naturally” supposed to have: one that helps them breakover their toe more easily when they stride, reduces stress on the deep digital flexor tendon, and makes life a breeze for the navicular bone. Therefore, proponents say, all horses’ feet should be shaped like that mythical ideal wild horse (kind of a take on the old “noble savage” trope from literature).

Furthermore, if you’re going to shoe the horse, proponents say, a shoe that encourages “natural” hoof movement should be attached to the bottom of the hoof. And, having seen to that, all will be good.

Well, um, no. At least not necessarily.

First of all, if we’re going to be absolutely strict about this “natural” thing, horses shouldn’t be running around in North America anyway. I mean, the indigenous North American horse (Equus occidentalis, if you must know) went extinct in something like 12,000 BC, which is way longer than anyone can remember. But here they are, nonetheless, as a result of having run away from their caretakers after having had to endure a boat ride from Spain. Call it repopulation—I say it’s unnatural.

Regardless, no matter what the feet of wild horses in the American west look like, it’s been shown that the “natural” shape of the horse’s foot depends almost entirely on the “natural” conditions of the ground that it runs around on.

So, whereas, in the west, the wild horses that evoke such strong emotions do tend to have upright feet and short toes, their eastern counterparts that live on wetter, softer ground tend to get more of a platter foot, their hoof walls don’t wear down in the same way (they tend to break off), and their hooves are more pliable. (If you really want to go into a lot of detail on this, read this rather dense article by the famous equine pathologist, the late Dr. James Rooney).

As it turns out, the shape of the horse’s foot in “natural” circumstances (no farriers) is influenced by three things.

1. Genetics
2. Friction
3. The quality of the hoof tissue itself

You can’t do anything about number 1—genetics are what they are.

Friction, of course, is the resistance that one object encounters when it is moving over another object. In the case of the barefoot horse, one object is the hoof and the other object is the ground. When you’re a horse living in the American West, you’re running around on hard, abrasive ground. Your feet get worn and chipped. Your toes get short. Your heels get upright. That’s “natural,” at least for one location.

But if you’re a horse that’s NOT living on hard ground…your “natural” hooves could take on an entirely different appearance.

If you’re slogging around in the mud and snow on soft ground, your feet are going to spread out, you’re going to get longer toes, and your feet will get soft. That’s all very “natural” given the circumstances, but it’s not good for marketing.

The third thing—the quality of the hoof tissue—relates more to genetics than to anything else. Sure, there are myriad products out there that purport to help with hoof quality, but, much as with good fingernails, a horse either has a good quality hoof or he doesn’t. If a horse “naturally” has a hard hoof it will wear differently than a horse that “naturally” has a softer hoof. The end.

I’m not trying to say that the “Natural Balance” approach is necessarily wrong. In fact, I find that the shoes can sometimes be helpful, say, in working on a horse that tends to grow a lot of toe (once you nail on the shoe, you are sort of obliged to cut back the toe a bit—the shoe can actually be something of a template). But they’re not a panacea, and, well, they’re not even really all that natural: horses don’t come with nailed on shoes, you know.

So, here are a few points to take home about “natural” balance.

1) Natural is usually fine, but it kind of depends on where you are. Running around in your “natural” birthday suit is a lot more comfortable in, say, the Bahamas than it is in Finland in December. You might want to consider your circumstances.

2) Horses should be shod as individuals—there’s no single system that works for all of them.

3) “Natural” is a great marketing tool

4) Find a good veterinarian and a good farrier, get them working together, and let them do their jobs.

5) Don’t make things harder than they already are.