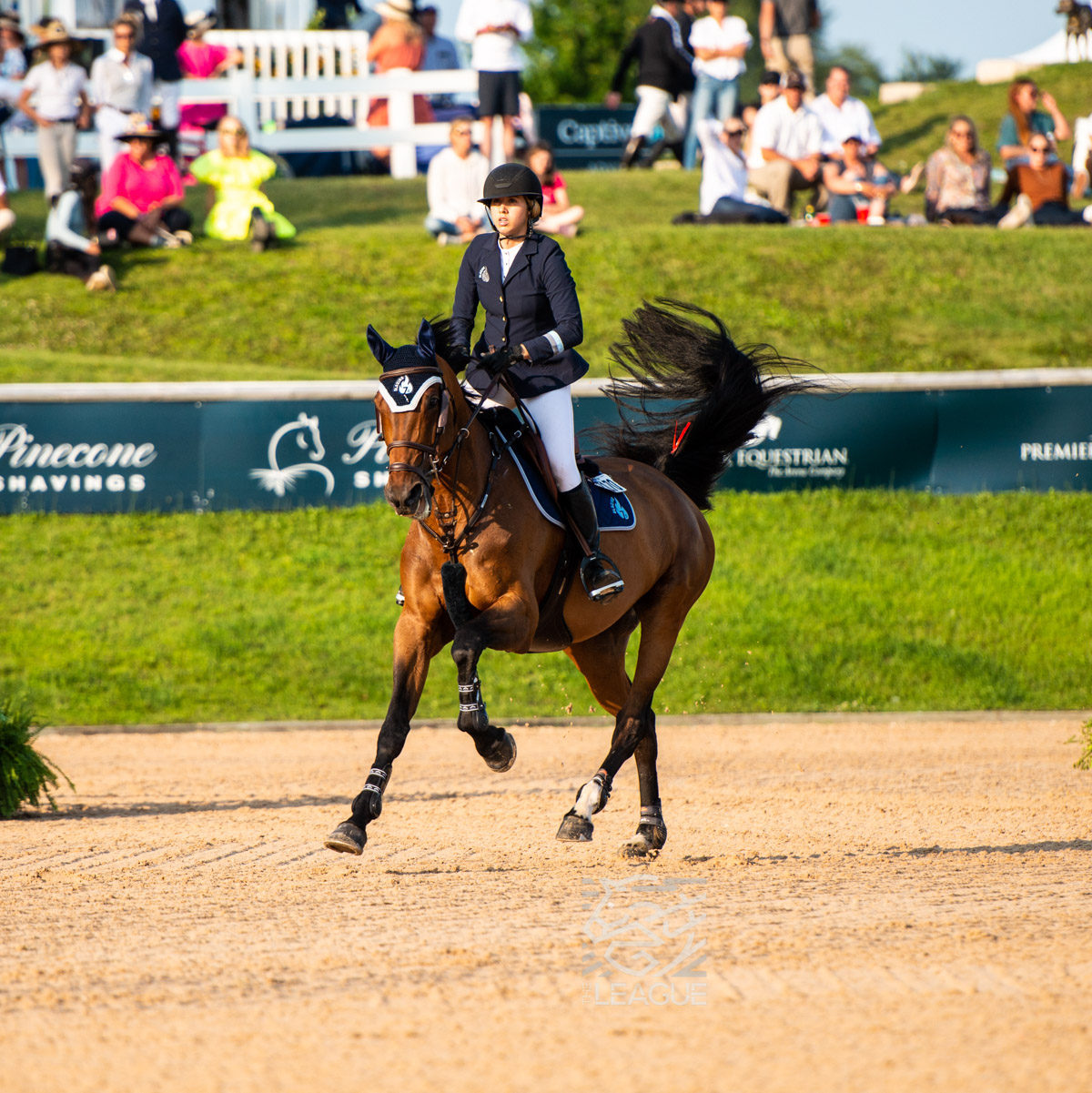 Major League Show Jumping is charging full steam ahead to the final event of its inaugural season in Southern California. As the race for the inaugural championship nears its conclusion, we are shining the spotlight on the fresher faces, the “rookie” riders in their first season competing with an international team.

Next Up: the Blazing 7s’ Nicolette Hirt

Nicolette Hirt is serious about Major League Show Jumping. The 21-year-old has jumped at nearly every MLSJ tour stop in 2021, from Traverse City to Angelstone, San Miguel and Monterrey, La Silla.

A deep string of show jumping talent has allowed her to utilize a strong rotation, and she has brought forward both Fleurette and Chatou 7 in MLSJ team competition for the Blazing 7s, which also includes Lauren Hough, Rowan Willis, Darragh Kenny, Cara Raether Carey and fellow U25 rider Chandler Meadows.

In Traverse City, Hirt jumped a top 10 finish in the CSI5* MLSJ Grand Prix with the 12-year-old Oldenburg gelding Chatou, whom Hirt has developed over the last two years. It was the first five-star Grand Prix for both horse and rider.

“I always have so much fun in the ring with [Chatou] and am so proud of how much he’s grown,” Hirt said.

The Selle Francais mare Fleurette has also been a reliable campaigner since joining Hirt’s string in April. The 12-year-old bay formerly jumped to the top of the 2019 Longines FEI Jumping World Cup™ Washington with two-time Olympic gold medalist Laura Kraut.

Hirt’s career, however, started far from the rated show circuit—at least, in the hunter-jumper discipline. Her first riding endeavors were in western pleasure with Arabians. As a pre-teen, she joined Hilary Johnson for the hunter-jumper circuit in Northern California before transitioning to the jumper ring at 14.

Hirt has trained with the likes of Will Simpson, Mandy Porter and Nicole Shahinian-Simpson, as well as Dietmar Gugler and Elisabeth Meyer, whom she joined in Germany to further her career in 2016. She now runs her program out of both Pleasanton, CA, at her family’s Iron Horse Equestrian Center, and Wellington, FL. In addition to her own show ring exploits, she has also taken an interest in sales and developing young horses. Both the 10-year-old mare S.I.E.C. Larissa and 7-year-old stallion Con Baloubet PS have put in strong performances in the CSI2* divisions offered on the MLSJ tour and are ones to watch for the future.

This committed young professional has made the most of her international team debut at MLSJ, we can’t wait to see her galloping towards future podiums.