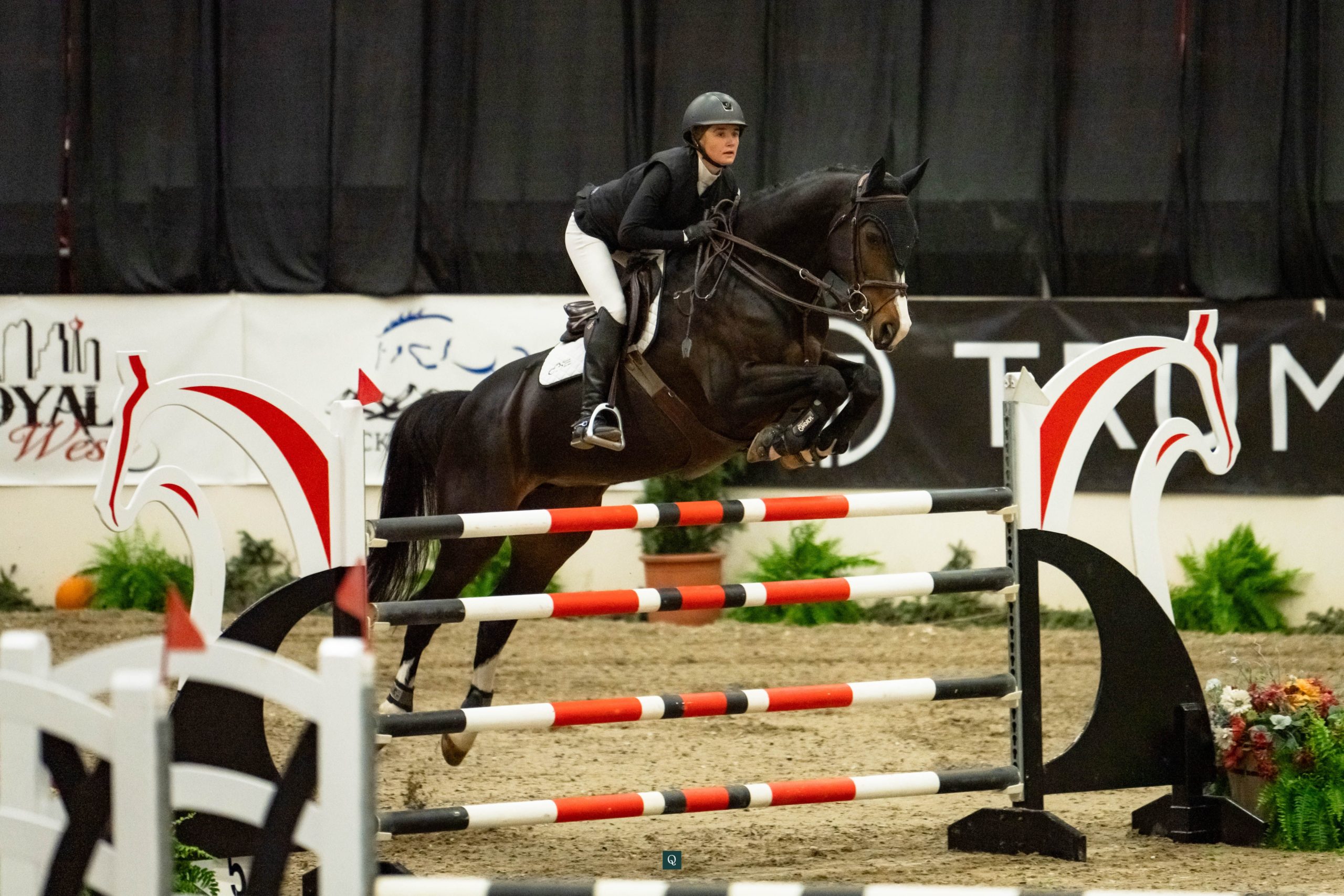 Halle Duke and her Canadian warmblood mare Ilana were underdogs heading into the U25 Championship Final last week. But they didn’t let a little thing like experience get in the way.

At just 18 and eight, respectively, the pair had only twice ever contested the U25 division previously and had never competed indoors when they rode away with Equestrian Canada’s $40,000 U25 National Championships last Saturday.

It’s a partnership that has been two years in the making.

The Spruce Grove-native started developing then-six-year-old Ilana in 2019. With COVID-19 putting the kibosh on much of the 2020 season, they only managed to compete a handful of times last year. Come 2021, the well-matched pair made up for lost time, climbing the ranks to make their U25 division debut at Langley’s Thunderbird Show Park in September, where they finished top 10 in all three classes. The following week, they made their 2* debut, never dropping more than a single rail.

Last week, Duke and Ilana added U25 National Finals to their growing list of firsts. Held at Royal West in Calgary, Alberta, after the Royal Winter Fair in Toronto was cancelled for a second year in a row due to the pandemic, the door was opened for Duke and her mare to take a crack at the Final.

“We just entered it to go and have fun,” Duke said about her chances of winning the National Championship.

Perhaps it was the lack of pressure Duke had put on herself and her mare for such a big competition. Or perhaps it was all the time the two had spent honing their skills at home, with trainer and dad, former Canadian team member, Jay Duke, during the pandemic that led to them winning.

Whatever the answer, they were untouchable. Duke and Ilana lead the event from start to finish.

Their winning week started with Wednesday’s $5,000 MarBill Hill Table C competition. The pair raced around the track in 59.18 seconds to take the victory in the class and the championship lead on a score of zero faults.

“I was really excited and proud of my horse,” Duke said. “I was worried she would be a little spooky because there’s a lot going on, but she didn’t seem to care at all.”

With scores from each phase carried over, Duke demonstrated she was able to keep her nerves in check, repeating their fault-free feat in Thursday’s $10,000 Devoucoux Saddles Jump off competition.

“I was really confident,” Duke said, about heading into Phase II. “My horse was jumping super well. We had one of our best warm-ups ever.” This time, Duke and Ilana produced two clear rounds and were the only horse/rider combination to head into Saturday’s Phase III on a zero score.

“I didn’t actually know I was in the lead going into round three, I didn’t want to know,” Duke said. “I was a little nervous because there had been no clears.”

True to form, Duke put any trepidation she might have had behind her, and she and Ilana jumped another faultless round in the $25,000 Rocky Mountain Show Jumping Cup, finishing the championships the way they started it—on a score of zero.

Not one rail. Not one time fault. Over four courses.

When asked what her plans are for the prize money, Duke didn’t hesitate with her answer: “Putting it back into my horse. We’re just beginning to show off how nice of a horse she is.”

Though their plans are still tentative, Duke is hoping to take Ilana to Wellington, Florida for the winter circuit.

“I’m taking a year off before I go to university. I want to ride.”