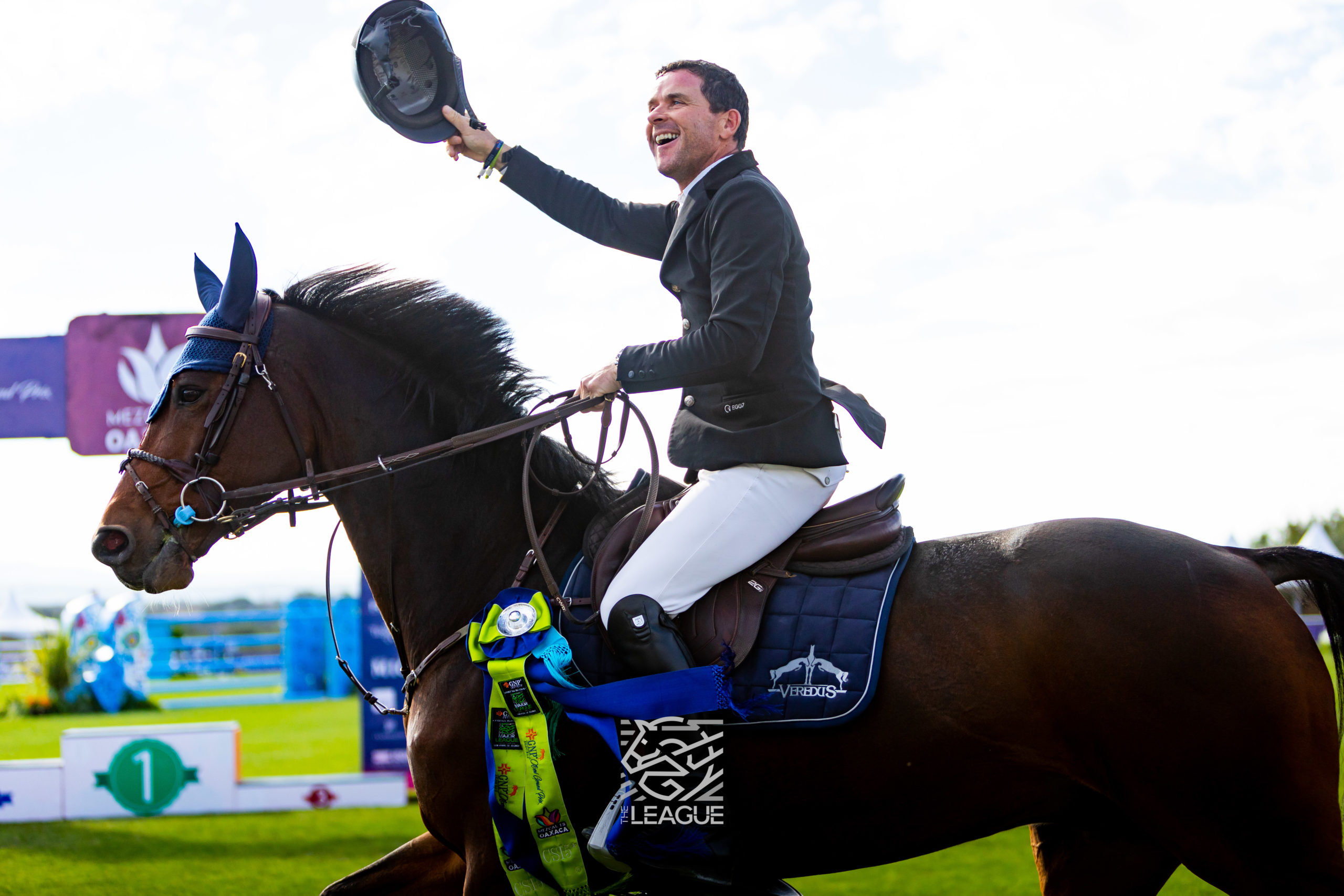 The course is set. The order has been drawn beaten out of a piñata. The tequila is flowing.

Major League Show Jumping (MLSJ) stops in San Miguel de Allende, Mexico for Stage VII of the Tour, hosted at the spectacular Otomi Residential. After the two-week midseason trade portal, there are notable changes in the team lineups and several new faces to the League making their MLSJ debut in today’s Team Event.

MLSJ co-founder Keean White and Otomi Warriors team captain Daniel Rihan rundown the team changes and breakdown the odds. If there’s one thing we know of the MLSJ format, it’s that anything can happen.

Keean White: Let’s get right into it. We’ve got the team event coming up tonight. Eight teams. We just had the trade portal, so a few new riders are coming into the League. The first one I want to talk about is Eye Candy.

Eye Candy is leading the race by a mile right now [with an 11 point lead], and they’re riding three new riders this week: Conor Swail, who just came off a World Cup win at Thunderbird Show Park, as well as Simon McCarthy and Emma Marlowe, who are both rookies to this level of show jumping. What are your thoughts on that team?

Daniel Rihan: Well, Conor is an amazing rider. He’s on a roll. He’s got a great streak going. But, you know, maybe Eye Candy is willing to lose some points this week. They’ve got a couple of rookies in there that haven’t been in this team competition. Maybe pressure will come up. I hope Conor can hold on to the pressure for them. We’ll see how they handle it.

Keean: And then we’ve got the Lucky Charms. Lucky Charms have been a bit of a nemesis to Eye Candy. They’ve been back and forth all season. This week they’re riding Shane Sweetnam, Jordan Coyle and Andres Azcarraga, who is new to the tour. Thoughts?

Daniel: The Irish are always strong and Jordan is an amazing rider, so is Shane. We’re very happy they’re here. They’ve done well in the tour. Andres is a great Mexican rider, he’s competitive. They’re going to be fast. It’s a team we have to be watching to maybe get on the podium.

Daniel: That’s a strong team. Juan Carlos, as you know, has been living in Europe for many years. [Team Captain] Neil Jones asked him to come here to make sure he can get on the podium, get some points. Samuel was here [in San Miguel de Allende] last year. He did really well. I haven’t seen him ride recently. Hopefully, he’s in good shape. And Patricio is a great Mexican rider, one of the best ranked. It’s a strong team, but some pressure is going to fall on them. I’m not sure I see them on the podium this week.

Keean: Okay, next up: Diamond Devils. They’ve got Erynn Ballard, Natalie Dean, and Bliss Heers riding this week. This team has been maybe the favorite almost every week, and they haven’t really made it to the top of the podium. Where do you think they’re going wrong?

Daniel: I was fortunate to see them in Caledon [MLSJ Phase XI] and, you know, I think they haven’t been lucky. Horses did not perform at that stage. They are one of the favorite teams, but they have to make sure their horses are ready for that competition. It’s two rounds. It’s not easy. They’ve got to get to the jump off. There’s pressure. They’ve got to take it seriously to make it happen. But I talked to both Erynn and Bliss, they’re very happy with the grounds [at Otomi Residential]. I think they going to give it a good try.

Keean: Now your hometown team: the Otomi Warriors. This week you’re riding Rodrigo Pessoa, Nicolas Pizarro and your son, Daniel Jr. I know your team had a pretty good finish up in Caledon, Stage VI—finishing third. Coming into the Championship, you’re in the middle of the pack right now. How do you like your chances this week?

Daniel: We started slow in Traverse City [Phase I]. The team is picking up. Nicolas and Danny have been on the team together for a while, they’ve got some points together. Now we’ve put Rodrigo in there. I can only say we think they have to be one of the teams that’s going to be in the podium. I cannot say anything else. You know, it’s their hometown here, so maybe pressure is on them, but I hope not. I hope they can go in the first place.

Keean: One of the teams that also just completed a big trade: A.I.M. United. They brought in Daniel Bluman for the second half of the year. He substituted a bit at the beginning of the season. This week, they ride Daniel, Eugenio Garza and Ashlee Bond.

Daniel: That’s a good team. We’ve been joking with Danny. He put some pressure on my son [at Angelstone] and he was jinxing with me. In Caledon we were having a great time. Honestly, I do think that’s the strongest team. Eugenio is a fantastic rider. Ashlee too. I believe that’s the team to beat. Got to watch out for them.

Keean: Ok, next is the Roadrunners. Stage IX and X, we go to their home turf. This week, they come to your home turf. They’re riding Christian Heineking. Kyle King, who’s been on an absolute tear, and Kaitlin Campbell. They’ve been knocking on the door all year. They’ve had a few podium finishes. Thoughts this week?

Daniel: I think they’re a very strong team. Kyle has been doing great in Toronto. He did fantastic in Calgary. He’s got a great horses. Christian, he’s a great friend, a fantastic rider, very experienced, as is Kaitlyn. I think have a really good chance to get some points to be on the podium. I wish them best of luck.

Keean: And then we’ve got the Blazing 7s. Blazing 7s ride Rodrigo Lambre, Cara Raether-Carey and Nicolette Hirt. They’re currently sitting in eighth on the team standings. Right now, they really need a podium finish. With four tour stops to go, they’ve still got time. What do you think their chances are this week?

Daniel: Well, Rodrigo it’s a bit of a home town hero. He lives in Mexico. He rides for Mario Onate. He’s won a couple of Grand Prix at Otomi, so he’s going to help them out. I cannot say they’re the strongest team right now. I think if they go clear in the first round, they’re fast and they can be on the podium. I say it’s a long shot, but Rodrigo can carry that team around.

Daniel: Let me ask you a question. What about A.I.M. United? Daniel Bluman is in there. Ashlee. Eugenio. Don’t you think that they could take it?

Keean:  So A.I.M. is for sure the strongest team on paper. But Eugenio hasn’t ridden this class before, this is his first week riding here and he doesn’t know the format yet. I think there’s some big strategy in this class, and the riders have been here and done it have a bit of an advantage.

Daniel: I’ve got to agree with you. I have to say something about Eye Candy. [Team captain Erica Hatfield] has been sending messages to everybody [on social media]. Mexican candy is chile, huh? So we’ll see. We’ll see what happens in Mexico.

Keean: (Laughs) You hear that, Erica, you’re getting called out.

Watch the MLSJ Team Event in San Miguel de Allende live (and for free!) on majorleagueshowjumping.com Friday at 3:00pm ET.