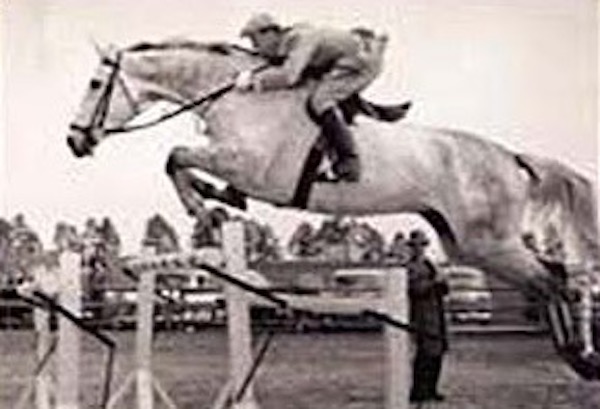 Gabor Nicholas Foltenyi, born in Hungary in 1922, received his first horse at age 10.

After attending Military High School, he graduated as an officer in 1943. He served in the Cavalry and received awards for bravery as well as the Order of Valor.

In 1948 Gabor, a candidate for the Hungarian National Equestrian Team, left Hungary for political reasons. After two years in Germany he came to the United States where he began working on the racetrack with Rex Elsworth. He then rode with Mrs. E. Bailey’s “Pabst Blue Ribbon” Stables in Purchase, NY, landing his first U.S. victory on Master Pabst at the Devon Horse Show.

Gabor spent the next two years at the Merkels’ WHY Stables of Brookville, NY. Believing that “Sugar Beats Vinegar,” he used Hungarian training methods that attracted wide attention. Always beginning with dressage, he allowed a horse to build his muscles and control before jumping. Gabor believed, “You get more from a horse by winning his confidence and allowing him to enjoy the sport and then keeping him, at all times, under gentle but complete control.”

Gabor was an “J” AHSA/USDF Dressage Judge, assisting the advancement of many horses and riders through the levels. Correct bio-mechanical dressage fundamentals were imperative to him.

In 1953 he reunited with his dear friend Bertlan de Nemethy, who would go on to have a legendary career as coach of the U.S. Equestrian Team. Together they rode and trained horses for Hall of Fame owner Eleo Sears. In 1955, after much success, Gabor moved to Michigan where he started Oakland Hills Farm. Reno, Sidonia, Lola, Diamant, Marola, Desiree, Kieves Confederate and Ksar d’Esprit are just some of the horses he trained and rode. Many horses he trained went on to represent the USET and in 1976 he coached the Japanese Team for the Montreal Olympic Games.

In 2010 Gabor was honored by the Hungarian Horseman’s Sport Association for his work “to strengthen the professional culture of riding in the life or international sports, sports organizations, and universal sport organizations.”