Behind the Look: CALLIDAE x MLSJ 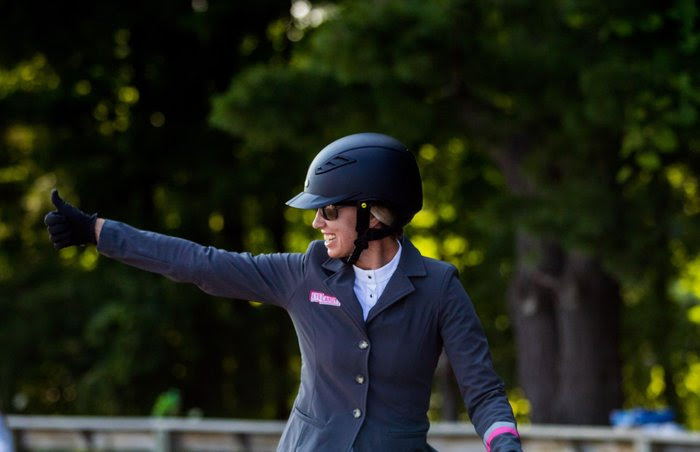 What do a 60-something American Adult Ammy and a 30-something Canadian show jumper have in common?

Both are more than a bit audacious, both have had more than one career, and both share a vision of what the athletes of the new Major League Show Jumping League (MLSJ) should look like as the teams battle it out.

Los Angeles’ Posner is a woman who speaks her mind. Smart, tough, and determined, she climbed the ranks to partner of the biggest law firm in the world before it was something women were supposed to do. Along the way, she abandoned competitive tennis for horses and, after 30 years of practicing law, set out to create the next great American luxury brand, with a focus on equestrian apparel.

Ontario native White has been winning in the equestrian world his whole life. What started out as a game to make a stubborn pony into a cooperative jumper became a highly successful career. White’s latest brainchild is the entirely new concept of bringing show jumping into the same franchise model as other top professional sports leagues in North America such as Major League Baseball, the National Basketball Association, and the National Football League. He joined forces with Matt Morrissey to develop a team competition format that is both easy to understand and exciting where the best riders in the world would compete at premier venues in North America.

Once White and Matt Morrissey set up the venues and the teams for the inaugural season of the Major League Show Jumping League (“MLSJ” or “The League”) tour, they turned to a number of other infrastructure details, including finding an apparel sponsor to design the team uniforms and other apparel and merchandise

That’s where CALLIDAE came in.

CALLIDAE was founded in 2014, with the company’s first full collection not coming until several years later. Posner started riding in her 40s and immediately fell in love with the sport. As she got more and more into the equestrian world, she decided the clothes didn’t capture what she saw as the history and grace of the sport and the lifestyle and decided to start her own equestrian clothing line. Posner had a clear picture of the look she was after:

“My inspiration for the look and feel of the brand is a photograph by Slim Aarons called ‘Riding School.’ The CALLIDAE woman is the 21st Century Audrey Hepburn, Grace Kelly, Jackie Kennedy—January Jones in ‘Mad Men.’ Casual but sophisticated, active, stylish, comfortable, and capable. She has classic sensibilities, but doesn’t take herself too seriously and enjoys the occasional wink.”

According to Posner, CALLIDAE approached the potential MLSJ collaboration by asking how best to create a collection that honors both the CALLIDAE aesthetic and the boldness and innovative spirit of MLSJ. CALLIDAE is known for its attention to detail, and proposed to put together a “rider kit” of several of its signature and most popular pieces that lend themselves to customization in ways other than simply the addition of team logos.

“It seemed important for the teams each to be able to infuse their respective personalities into the uniforms, while maintaining an overall sense of cohesion,” explained Posner.

“My team and I were thrilled to be chosen. After celebrating for about an hour, we got to work,” says Posner. “There was a lot to do—there were eight teams and nearly 50 riders and both the team and uniform concepts were new to everybody. There were a million details to keep track of and, to add to the complexity of it all, we were producing men’s clothes for the first time. But we got it done.”

On a beautiful mid-July Saturday night in Traverse, what began as a dream for MLSJ co-founders White and Morrissey finally came to life.

“From where I sit,” says Posner, “the inaugural season of MLSJ has been an unmitigated success. The events are not only beautiful and well managed, but also, just so much fun. There is no question it will elevate our sport to new levels and audiences. And it’s beyond exciting to see the top riders in the world wearing CALLIDAE uniforms.”

Week 5 of the MLSJ tour shares the spotlight this week at Traverse City with both the American Gold Cup and the Traverse City Hunter & Derby Finals. Don’t miss the excitement Friday evening as the eight teams battle for position in the overall standings.

Stop by the CALLIDAE booth—located near the International Ring—to meet the founder and to shop the MLSJ apparel and merchandise and the entire CALLIDAE line.