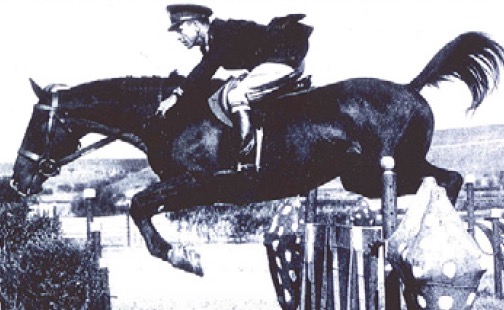 Franklin Fearing Wing, Jr., the son of a U.S. Army officer, was one of the best riders of his era.

Wing graduated from the U.S. Military Academy at West Point (N.Y.) in 1930 and served in the 7th Cavalry Regiment at Ft. Bliss, Texas, where he was on the polo team. When transferred to the U.S. Cavalry School at Ft. Riley, Kan., he joined the U.S. Army show jumping team under Harry D. Chamberlin’s leadership. He and Democrat were selected for the U.S. Team for the 1940 Olympics, but were unable to compete when the Games were canceled due to the war in Europe.

The war didn’t completely prevent Wing from achieving success in the jumper ring, however, and his presence was felt both before and afterward. Wing rode on eighteen Nations’ Cup teams from 1937–49 and in 1948 became the first American ever to win the coveted Grand Prix of Aachen riding Totilla.

Gen. Wing served in the South Pacific during the war, after which he was reassigned to Ft. Riley to rejoin what was left of the show jumping team. But since the team had no base of operations, Wing and the other team members moved to Germany to train for the 1948 Olympics in London. Wing still had the great Democrat, and he was part of a three-way tie for the individual Silver Medal at the end of the first round. However, in the jump-off, he had 4 faults and the slowest time and had to settle for fourth.

After the Olympics, the Army’s equestrian activities were terminated, which led to the formation of the U.S. Equestrian Team in 1950. Gen. Wing remained in the Army until he retired in 1960, but a year later he became executive vice president and treasurer of the USET, and helped establish the Team’s headquarters at its current location in Gladstone, N.J. He remained in this role with the USET until 1965, but continued to serve on the USET Board of Directors until 1975 and then on the National Advisory Council until 1983. Gen. Wing died in Bellevue, Wash., on July 6, 1994, at age 86.

Democrat, a brown Thoroughbred gelding (Gordon Russell-Princess Bon), was foaled at Ft. Robinson, Neb., in 1933 and shipped as a four-year old to the U.S. Cavalry School at Ft. Riley, Kan., where early on he showed his jumping prowess. Democrat had early success with Wing before World War II, notably in 1940 when the pair accounted for the individual championship at New York, but at age eight his career was put on hold and he remained at Ft. Riley until the war concluded.

Wing and Democrat rekindled their success after the war, as related above, before the brown gelding qualified for the 1952 Olympic Team with Capt. John Russell. There, Democrat finished 24th individually and helped the infant USET win the team Bronze.

His career ended on a glorious note. After he returned from Europe, Democrat, now paired with Hall of Famer William C. Steinkraus, won all eight individual classes they entered on the 1952 fall indoor circuit, jumping approximately 150 jumps faultlessly. They also shared in several team victories including winning the Nations’ Cup in Toronto.

Democrat was retired to Morven Stud near Charlottesville, Va., home of then USET President Whitney Stone, and died there at the age of 24 in 1957.