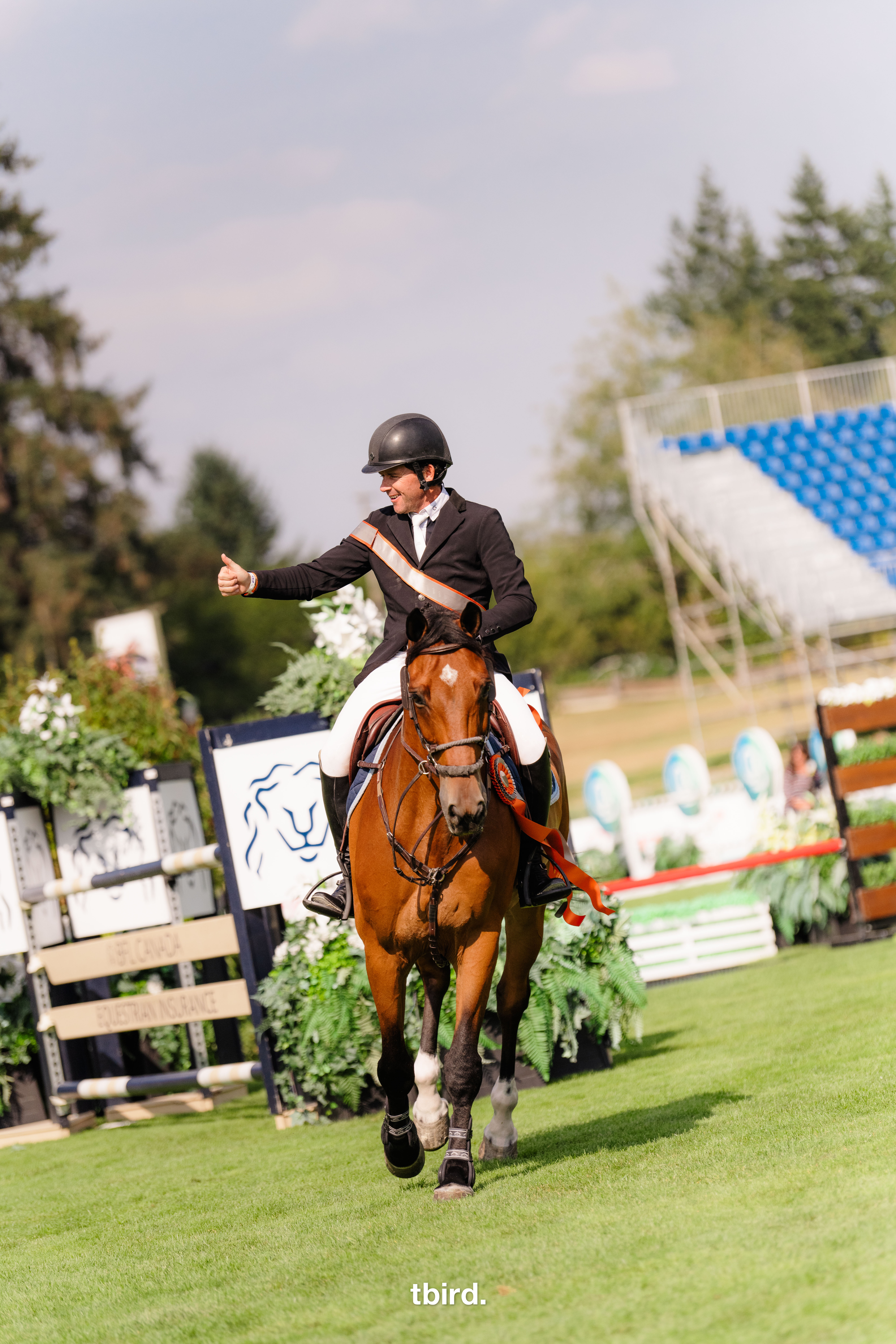 Historically, Conor Swail has made a habit of winning at Thunderbird Show Park. But when the venue reopened in July, he was noticeably absent.

He had to take a [border-closure-forced] detour.

The return of international competition to Langley, BC, along with the lessening of government travel restrictions, has brought Swail back to his home away from home, and the Irish rider returns with one of his strongest strings in recent memory. Swail asserts, Thunderbird will see the entire group, strategically. He’s established a rotation that’s kept him winning, alternating between experienced veterans and up-and-coming talent.

The young guns were the first to cross start timers in the Fort Grand Prix Arena at the CSI3* Summer Fort Classic, and unsurprisingly, they quickly got Swail off to a winning start. Swail rode to the top two placings in the $37,000 CSI3* George & Dianne Tidball Legacy 1.45m with Theo 160 and Gamble, respectively, on Wednesday afternoon.

“I have a bunch of new horses that are just getting up to [this] level, but I’m lucky enough that they have a nice bit of quality, all of them,” Swail said. “We’re getting a nice run together.”

That run started in Tryon. Normally a fall destination for Swail, the North Carolina venue became his summer base while he was unable to travel to Canada, and the trip proved fruitful. In the span of two weeks, Swail won three international classes, plus the national standard Sunday Classic—with four different horses.

“Tryon was great for me. It’s the first time I’ve stayed and done the whole series there,” Swail said. “[It was] kind of forcibly so in a way, but I have to say, it’s also a wonderful facility. My horses really thrived there and improved a lot.

“What helped in Tryon as well was that their [secondary] ring is where they held [the 2018 World Equestrian Games],” Swail added. “Even if you were jumping 1.20m, you were in a nice big ring that the horses can learn a lot in.”

Swail brings Theo 160 and Gamble forward at the Summer Fort Classic. Asta Torokvei’s Gamble is the more experienced of the duo, having jumped ranking classes at the five-star level, but the 10-year-old bay jumped his first CSI3* grand prix in April when two international weeks were added to Wellington, FL’s spring circuit.

“That was his first time doing a bigger grand prix. Then he got break [before] we went to Tryon, and he did a couple of three-star grand prixs there. That’s really benefitted him,” Swail said. “He’s getting closer to doing the bigger grand prix level.”

Nine-year-old Theo 160 joined Swail’s string midway through the winter circuit. Swail owns the chestnut in partnership with members of the Philippaerts family; the gelding jumped his first ranking classes in Tryon, taking the win in the CSI2* Speed Stake. He’s quickly added to the tally at tbird, winning his first time out on the venue’s expansive grass field.

“He’s one of those horses where his stride is not huge,” Swail said. “Actually doing the numbers is quicker than the other horses. For me, it was his first time being here, and I didn’t want to push him too hard. I knew if I just did the numbers, we’d be quick enough [for a good placing]. A win is a nice bonus.”

Swail’s more experienced mounts are also in fighting form, but they’re resting up.

Eleven-year-old Koss van Heiste has been with Swail the longest. The big grey jumped his first FEI class with Swail at tbird in 2018 and will contest the upcoming Spruce Meadows circuit.

Count Me In, who won the CSI5* $500,000 HITS Chicago Grand Prix in 2018 with Canada’s Beth Underhill, is an exciting new addition; the partnership is off to a strong start, having won the CSI3* Power & Speed Stake at Tryon in late July.

Vital Chance de la Roque has shined brightest and is a contender for tbird’s CSI4* Harvest Celebration in September. The 12-year-old gelding has won three international grand prix events since June, including the CSI4* Grand Prix at Saugerties in late July.

With a full schedule of shows on the calendar once again after a shortened 2020, it could be easy for a rider with such horsepower to keep jumping, but Swail has made scheduled time off a key part of his program. It’s working. When Gamble entered the arena at tbird, he hadn’t jumped a class since June 12.

“The more experienced ones getting a little break [right now],” Swail said. “I’m able to rotate, and it’s keeping me competitive.

“It’s sort of all coming together at the right time.”