BCC Could Shape Up as the Brad Cox Classic 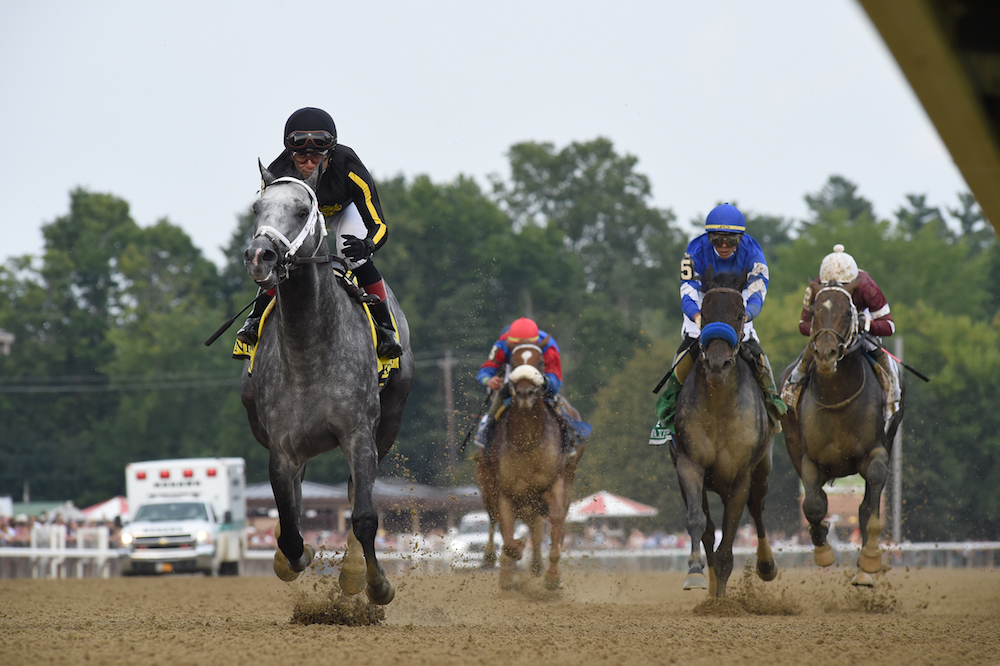 One is a speedy front-runner. Another a stalker pouncing in the deep stretch as the speed withers. The third is a natural closer, saving a quick burst of speed for the finish.

Different in their running styles, what Knicks Go, Essential Quality and Mandaloun all have in common is their trainer, Brad H. Cox. What they may also have in common is a potential meeting in the Nov. 6 Breeders’ Cup Classic.

Knicks Go bested Godolphin’s Maxfield, Silver State, Eclipse Award-winning Three Year-Old-Female Swiss Skydiver and longshot By My Standards, who broke from the rail and lost a shoe during the race.

The five-year-old gray son of Paynter also earned his fourth Grade One victory while doing what he does best, rocketing to the lead from the start and outstretching his competitors.

Challenged out of the gate by Swiss Skydiver, Knicks Go dispatched that challenger around the first turn and extended his advantage to multiple lengths in the Saratoga backstretch.

His closest competitor, Godolphin’s Maxfield, never seriously challenged. Nor would Silver State, winner over Knicks Go in the Metropolitan (G1) and the Oaklawn (G2) Handicap winner. The 12:7-2-2 son of Hard Spun (out of Supreme by Empire Maker) saw his six-race win streak for trainer Steve Asmussen eclipsed, but remains a likely Classic challenger.

The Whitney is part of the Breeders’ Cup Challenge series and awarded an automatic $170,000 expenses-paid berth in the $6 million Breeders’ Cup Classic to winner Knicks Go.

Question is, will Knicks Go go there?

Speaking with The Bloodhorse, Cox was fine with how his charge came out of the race but non-committal on a future plan.

“I was really pleased with how he looked this [Sunday] morning,” said Cox. “He ate well, so everything is positive. My thought would be to give him a race five to six weeks out [from the Breeders’ Cup Classic]. It would be nice to get a race into him between now and then, but where that might be, I don’t know.”

The Classic is run at 1 1/4 miles, a distance Knicks Go has not yet run. Based on his performance in the Whitney, that challenge seems within his range, but that decision will be left to the Korea Racing Authority’s owners on the advice of Cox.

A return to the Big Ass Fans Dirt Mile, which he won last year, remains an alternate choice.

“I think the Classic being at Del Mar gives you a little more confidence about trying the mile and a quarter as opposed to Churchill Downs where there’s a longer stretch,” mused Cox. “He does have speed and that’s his weapon, which was on full display today,” Cox said about his Maryland bred [out of Kosmo’s Buddy by Outflanker]. There’s obviously a big difference in the purses but we’ll see how things go.

“It’s going to be a timing thing, not a graded thing or purse thing,” concluded Cox. “We just want to get a run into him between now and then [Nov. 6].”

That’s not the only decision facing the reigning Eclipse Award Trainer.

Cox-trained Essential Quality continues to run under the radar—what’s that about? Godolphin’s Eclipse Award-winning Champion Two-Year-Old, only a Kentucky Derby-length away from a perfect record over seven contests, is primed for his Aug. 28 run in the Breeders’ Cup Challenge “Win and You’re In” Travers Stakes, which also offers a Classic berth.

Mandaloun looms to round out Cox’s embarrassment of Classic-potential riches. The current runner-up in this year’s Kentucky Derby is also expected to challenge stablemate Essential Quality in the Travers.

Beyond the Cox trio, let’s not forget Hot Rod Charlie, another speedster who ran out of gas by a half-length to Essential Quality in the Jim Dandy (G2).

A possible Distaff entry and potential Horse of the Year candidate, Letruska, could pose a choice to jockey Irad Ortiz, Jr. riding Swiss Skydiver for the first time in the Whitney.

Ortiz is the regular rider of Letruska. Mexico’s Champion Three-Year-Old nosed out dual Eclipse Award-winning mare and likely future Hall of Fame inductee Monomoy Girl in the Apple Blossom (G1). Now 20:15-1-1 and having a monster year, connections for the Super Saver filly will need to determine where to run the likely entry in the Aug. 28 Personal Ensign.

But it is Swiss Skydiver’s likely last year on the track. The daughter of Daredevil’s dare-deviling connections, trainer Ken McPeek and owner Peter Callahan, could opt for yet another run against the boys.

One scenario could see Ortiz piloting Letruska or Swiss Skydiver in the Distaff and aboard the other in the Classic.