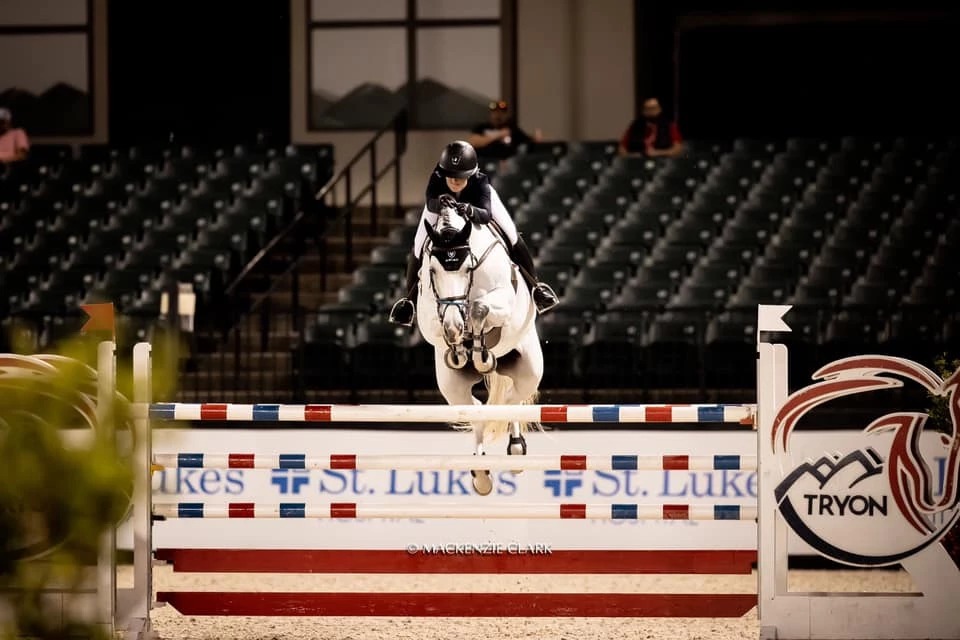 But it’s a May 23 victory in the $30,000 Cleghorn Gun Club Grand Prix at the Tryon International Equestrian Center that might just be this pair’s most meaningful triumph. The under-the-lights win marked the first for “Hadja” since returning from what was nearly a career-ending injury, keeping the mare away from the sport for more than a year.

“I felt like everything had come full circle [in that moment],” Cruciotti-VanderVeen said. “Our partnership, I feel, is very special. I know her so well. The way it all came together [that night]…I called it ‘divine intervention.'”

More than a fluke

It was more than 18 months prior in November of 2019 when, Cruciotti-VanderVeen, in the thick of her next World Cup qualifying season, noticed that her horse did not feel quite right when warming up for the jump-off of the CSI3*-W Desert Classic in Thermal, CA. With an abundance of caution, the pair sat out the remainder of that week’s competition, and within two days, Hadja seemed more like herself. The duo would go on to jump respectably at the Longines FEI Jumping World Cup™ Las Vegas, with just one rail against their score in a class that saw only two clear rounds.

“She was completely herself [in Las Vegas],” Cruciotti-VanderVeen recalled. “Collectively, our team talked, and our vets at the time chalked it up to being a one-time thing, or a fluke. They thought she might have stung herself, and it made sense.” After a well-deserved routine rest for the holiday season, Cruciotti-VanderVeen prepared for the 2020 Winter Equestrian Festival. In their first outing of the year, Hadja jumped a clear round in the WEF Challenge Cup. Returning for the jump-off, however, it took just one fence for Cruciotti-VanderVeen to recognize a familiar and unwelcome feeling. She pulled her horse up. “She came out of the ring, and she was very lame. We were very concerned,” Cruciotti-VaderVeen explained. “This clearly was not a fluke, and we didn’t want to repeat the same mistake. So, we sent her for a bone scan.” That bone scan came back with inconclusive results, and the team at Cruciotti-VanderVeen’s family’s Serenity Farm spent the following few weeks trying to isolate the problem. Ultimately, veterinarians determined that performing a fasciotomy would be the best course of action. A three-month recovery period was prescribed after a successful surgery in Ocala, FL, but as that timeline progressed, Hadja did not.

“She slowly started to come back, but she never felt quite right. If anything, she was worse,” Cruciotti-VanderVeen said. “I remember thinking, ‘This does not seem normal.'”

It was September 2020—nearly a year since Hadja had first began exhibiting symptoms—and little-to-no improvement had been made.

“We were clearly missing something,” Cruciotti-VanderVeen said.

Cruciotti-VanderVeen’s mother, Cindy Cruciotti made a phone call to Colorado—where, for years, Serenity Farm had made its base. On the other end of the line was Chris Kawcak, Director of Clinical Services at Colorado State University. Kawcak is one of a team of researchers working to find ways to prevent and treat catastrophic injuries in equine athletes—and an old friend of the Cruciotti family.

Her next call was to Ladd Squires, who, before entering into semi-retirement, was Serenity Farm’s veterinarian. He and Will French, who specializes in equine acupuncture and chiropractic, met Kawcak and Hadja in Colorado Springs—and started from scratch. Collectively, Hadja’s team would become known as “the mind hive.”

Hadja spent a week in Colorado—three of those days were spent solely on diagnostics. By the end of the trip, the group surmised that they had found the root of the problem, but Kawcak’s prognosis was grim.

“What he felt like was the core problem was a degenerative nerve in her back,” Cruciotti-VanderVeen said. “He gave her only a 20 percent chance at coming back to form. “It was really hard to hear,” she continued. “We had tried to be so optimistic, but at the same time, we had to be realistic. How long could we continue?” Squires, however, had a bit of a brighter outlook. He recommended giving rehabilitation a try. “He said, ‘All you can do is try to get her fit and see if she comes back,'” Cruciotti-VanderVeen recalled. “My big concern in the beginning was selfishly putting my wants above what was best for her. Ladd said, ‘She’ll tell you. Horses always do.'”

From baby steps to giant strides

Hadja was administered Gabapentin, which is used to treat neuropathic pain, and continued to receive chiropractic treatment from French. The mind hive was getting closer, but the medication only worked temporarily. Cruciotti-VanderVeen vividly recalls almost “throwing in the towel” while at Tryon in the fall.

“Every day was a different rollercoaster. It was so challenging for everyone,” she said. “You couldn’t look too much into the future. You saw enough that you got excited, but then [there was a setback].”

Now joined by Florida-based veterinarian Kate Stephenson, the group had one last idea—an epidural. Then, Cruciotti-VanderVeen once again attempted to slowly bring her horse back into work. The pair worked mostly on the flat and, while in Tryon, Hadja benefitted from aqua therapy at the Asheville, NC-based Still Creek Farm. The mare continues to regularly use the facility’s HydroHorse Aquatred, a submerged hydraulic powered treadmill in a specially designed pool, when Serenity Farm is showing in the area.

This time around, there was progression, improvement, consistency. By the end of the 2021 Winter Equestrian Festival, Hadja wasn’t just back in the show ring: She was clear in the CSI3* WEF Challenge Cup—and ready for more.

A month later, the pair was back in Tryon, where Hadja and Cruciotti-VanderVeen produced the only double-clear round to take the win in the Gun Cleghorn Gun Club Grand Prix. It was an emotional moment for Curcioitt-VanderVeen. She repeatedly expresses her gratitude to the large, supportive team that came together to diagnose and treat her mare—and, most importantly, encourage her to not give up on her horse.

“God’s really smiling on us,” Cruciotti-VanderVeen said. “[Hadja] feels better than even before. I think this prolonged her career, because we finally treated the root of the problem.”

While there are renewed goals for Hadja, Cruciotti-VanderVeen doesn’t let herself get too far ahead. With a second chance aboard her special horse, she’s simply enjoying the ride.

“It’s a different mindset [with Hadja now]. I love to be competitive, but now when I ride her, everything is a bonus,” she said. “For me, there’s no room to feel nervous or anxious; I’m just excited that I get to ride her and show her. I try not to let other things cloud my judgment, and it’s just so much fun.

“The queen has spoken, and I think she wants to keep going.”

Feature image: After more than a year away from the show ring, Hadja van Orshof jumped Kelli Cruciotti-VanderVeen to victory in the Cleghorn Gun Club Grand Prix at the Tryon International Equestrian Center. Photo by Mackenzie Clark for TIEC.