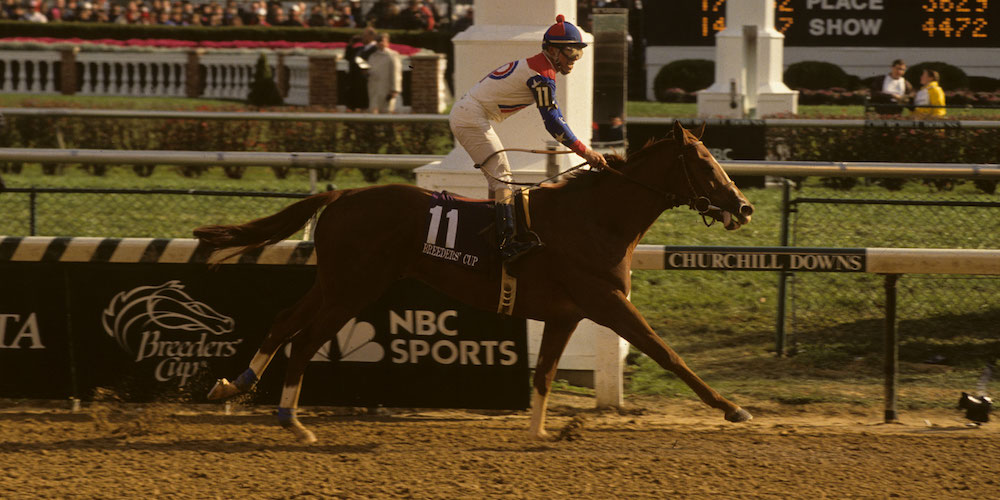 There are singular announcer calls in racing that have come to define the glory of the sport.

Who can forget “He’s moving like a tremendous machine!” Chic Anderson’s unforgettable analogy as Secretariat and Ron Turcotte rounded the backstretch in the 1973 Belmont Stakes on the way to a record-breaking time and 31-length victory?

With the dust of the rubble of the Twin Towers and surrounding buildings that fell to terrorists on 9/11 still circulating in the New York air, “Tiznow wins it for America!” was the patriotic rallying cry from Tom Durkin as Tiz crossed the finish line with Chris McCarron to capture his second consecutive Breeders’ Cup Classic, restoring a sense of hope to a then-despairing nation.

But after Secretariat’s sublime performance and before Tiznow’s inspiring one, another horse’s most glorious moment was captured in time. It was also Durkin who exclaimed in astonishment “…and Arazi runs right by him!” as the European Champion came from 13 lengths back in last place to pass by 12 competitors, then power by stunned leader Bertrando with a devastating move around the second turn at Churchill Downs under Pat Valenzuela to seize the 1991 Breeders’ Cup Juvenile.

The call and comment would become part of Durkin’s legend; the race, of Arazi’s.

The son of Blushing Groom (out of Danseur Fabuleux by foundational Thoroughbred sire Northern Dancer) passed away quietly from infirmities of old age Thursday at age 32 while pensioned in Australia. The racing world is mourning the Champion three decades later as if his feat had been accomplished yesterday.

It is rare in racing that a single never-to-be-repeated performance can become the stuff of legend, but that is how great Arazi’s Juvenile is remembered by those who witnessed it.

But wait for that—there’s more.

Relatively small at 15.2 hands and with a crooked blaze, Arazi was light on his hooves and had a quick turn of foot.

Claimed by many to be the greatest two-year-old ever—greater even than Secretariat at that age—Arazi’s achievement is magnified by the fact it was his first time racing left-handed and on dirt. And, he had shipped from Europe to participate in the race. Thoughts of European Champions who would come later to conquer America are inescapable—like three-time consecutive Breeders’ Cup (Turf) Mile Champion Goldikova (2008-2010) and 2018 Turf Champion Enable.

But so, too, are thoughts of reigning Breeders’ Cup Juvenile Champion, 2021 Belmont winner and likely Classic entrant Essential Quality.

More on that in a moment.

The 1991 crop of two-year-olds was highly regarded. Six of them would run in the 1992 Kentucky Derby.

There was Dance Floor, owned by celebrity rap star M.C. Hammer and trained by old-school two-stepper D. Wayne Lukas. The son of Star de Naskra out of Dance Troup had already shown his star power and dance moves, hip-hopping to an easy win in the Breeders’ Futurity.

Bertrando, the undefeated son of 1986 Breeders’ Cup Classic winner Sky Walker, sauntered in from California, thought to be a serious challenger.

Bettors thought so, too, making Bertrando a 2-1 co-favorite by the call to post after the colt toyed with his Norfolk Stakes competitors at Santa Anita, wiring the field by nine lengths in a hand ride by Alex Solis.

And then, of course, there was European invader Arazi. Trained and raced in France by Francois Boutin, the Kentucky-bred was owned initially by Allen E. Paulson, a pilot and founder of Gulfstream Aerospace Corp., a maker of private jets. He famously named his horses after the five-letter aeronautical checkpoints on the world aviation map.

Paulson would later own two Hall of Famers: Azeri, winner of the 2001 Breeders’ Cup Distaff and three Eclipse Awards (2002 HOY and 2003–2004 Champion Older Female); and of course Cigar, one of racing’s all-time greats. He’s part of the story, too.

Arazi was termed the “X-Factor” in the Juvenile. The youngster was the winner of six consecutive races in Europe, five graded, three G1. His wins were decisive, but all were right-handed on turf. And he was shipping from Europe, an experience that can interfere with any horse’s mindset, not to mention its training and feeding habits. Could the French invader comprendre les methods anglaises?

Long because he broke badly in the Oct. 12 Juvenile under Pat Valenzuela, perhaps confused at the start by the changes in direction and surface.

Bertrando left swiftly and cruised to an early lead, threatening to wire the race in a full 14-horse field. By the backstretch, his rivals were already falling back.

But what Arazi did coming out of that backstretch into the second turn has only one comparison: Secretariat’s move around the first turn in the 1973 Preakness Stakes.

But even that was only the first turn.

What Arazi did coming around the second turn and into the stretch in that Juvenile—a turn he actually missed, going wide—is nearly unthinkable after a near-mile had been run.

Durkin has what many consider to be his greatest-ever racing call:

Arazi’s winning margin in the Breeders’ Juvenile—five lengths—became a hand ride in the deep stretch and the largest margin in the race’s history to that time.

By the time he was entered in the Juvenile, Arazi was co-owned by someone on the literal other side of the world, someone who loved his native Arabians, but also Thoroughbreds. In fact, he had a singular racing ambition: to own a Thoroughbred that raced in and won what was considered then to be the world’s most prestigious race, the Kentucky Derby.

In 1991, there was no Godolphin Racing, no Darley Stud. But there was this one man’s equestrian ambition with the means to pursue it.

Prior to the 1991 Grand Criterium at France’s Longchamp, Sheikh Mohammed bin Rashid Al Maktoum—Sheikh Mo to his friends—became co-owner with Paulson of Arazi. He paid a then-incredible $9 million for his 50 percent share.

Arazi returned to France. There he was prepped, some say over-confidently, for the 1992 Kentucky Derby where he entered the gate as the 6-5 favorite. He attracted nearly $2 million in betting, $1.5 million of them “win” bets.

Arazi entered as the Derby favorite and finished as an eighth-place also-ran. It was the worst finish of a Derby favorite in the race’s history. The disappointment was underscored by winner Lil E. Tee’s longshot 17-1 odds.

Paulson and Sheikh Mohammed would reunite a half-decade later. A then-nascent racing enterprise named Godolphin after one of the three founding Arabians of the Thoroughbred breed (Darley, the Byerley Turk) successfully sought to lure America’s greatest racehorse, Cigar, to what it hoped would be the world’s greatest, certainly richest at $4 million, race—the 1996 Dubai World Cup.

Godolphin was established in 1994 by Sheikh Mo to put the sandy, under-developed Arabian Gulf Emirate of Dubai on the transportation and tourist map. He even built a racecourse, Nad Al Sheeba, then established an annual $4 million dollar (then) race to sweeten the invitation.

The gambit, perhaps the greatest longshot in racing history, succeeded. Cigar came and won the inaugural Dubai World Cup by mere ashes over Burt Bacharach-owned (remember him?) Soul of the Matter.

Dubai has become Dubai. But what of Paulson’s and Sheikh Mohammed’s run for the roses?

It was not to be, neither then nor now.

Both Paulson and Sheikh Mohammed are united in this singular respect: notwithstanding their greatness as owners and their hundreds of graded wins and winners bred and raced worldwide, neither won a Kentucky Derby—not Paulson who passed at 78 in 2000, not Sheikh Mo, now 72, whose persisting pursuit of Kentucky Derby roses would see his best recent chance, Frosted, fall short in 2016.

This year’s Breeders’ Cup Juvenile winner, Godolphin’s and Sheikh Mo’s own Essential Quality, again entered the gate as the Derby favorite, but left a disappointing current fourth by a mere length. That followed a poor gate 14 draw and a slam at the start from well-regarded Rock Your World that impeded the colt’s preferred stalking position and left him too wide throughout the race.

Arazi’s three-year-old career disappointed, much like Essential Quality’s Derby finish. He would add only another G2 and a listed win to his record and would disappoint again after returning to turf in the St. James’s Palace Stakes (G1) at Royal Ascot and the Breeders’ Cup Mile (G1). He was retired with a respectable 14:9-1-1 record and thoughts of what might have been.

Gone but never to be forgotten

Sheikh Mohammed bought out Paulson’s remaining share in Arazi and stood him at Dalham Hall in Newmarket, England. Arazi would later stand in Japan, the U.S., even Switzerland.

Like Secretariat, he was more successful as a broodmare sire, not as a sire of racehorses, with Congaree his most notable racing offspring. He eventually was pensioned to Australia’s Stockwell Thoroughbreds near Melbourne where he lived out his days until his quiet passing Thursday.

“The day had to come, but it was a nice and very peaceful way for him to go. It’s been an honor never lost on us to have been guardians to such a beloved horse and a superstar.

“It will be a different place without him to wake up to as he was a cheeky old fella. He lived a great life and was so highly regarded in the U.S. and UK.

“Racing fans around the world always remembered him and his memory has never been diminished over the years. In his brilliance at the Breeders’ Cup, he did something that has never been forgotten.

“He still to this day gets fan mail and the outpouring on social media to his passing has been unbelievable. He’ll be greatly missed.”

People who saw the 1992 Kentucky Derby claim it was poor career management that cost him that Derby win. Perhaps a different trainer, perhaps different preps. Predictably, the same was said of Essential Quality’s Derby run this year.

No matter. Both remain Breeders’ Cup Juvenile Champions. For Essential Quality, there yet may be an unforgettable future built on an already solid six-for-seven win record that includes one of the most thrilling Belmont Stakes wins ever and an upcoming Nov. 7 Breeders’ Cup Classic test.

For Arazi, there is an unforgettable past, one many consider to be the finest performance in any race in all of Breeders’ Cup history. Or as Tom Durkin described the finish of the Juvenile on Oct. 12, 1991: