What’s in a Name? Plenty For the Owners and Organizations Behind ‘Rideforthecause’

Home > Blog > Racing > What’s in a Name? Plenty For the Owners and Organizations Behind ‘Rideforthecause’ 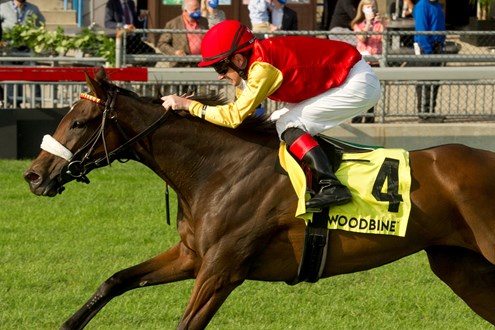 Spend any time around Thoroughbred racehorse breeders and owners and you will learn that some are among the most passionate and generous of all participants in any sport. Aside from the financial burden of caring for their own horses, they contribute retirees and the funds that support them to beloved places like Old Friends in Georgetown, Kentucky, and the 80 other farms that make up the Thoroughbred Aftercare Alliance.

In October of 2020, Kevin Sanford, Mark Samuel, Kim Samuel, and Rick Balaz of Sam-Son Farm decided to disperse their racing and breeding stock. The estimated two-year plan was huge news in the Thoroughbred industry, since Sam-Son Farm is, as described by Bloodhorse, “…one of the true breed-to-race operations” in the Thoroughbred racing world. Founded with a claimer by Ernest Samuel in 1972, Sam-Son has earned more than 70 Sovereign Awards, Canada’s year-end equivalent of America’s Eclipse Awards.

“The [#Rideforthecause] program started long before there was a program,” recalls CEO Mark Samuel. “It was a concept. About a year into our foals’ lives, we get to naming them. Normally, we make use of the names of the dam and the sire.”

The responsibility for naming the foals was traditionally divided among the owners. The naming of a 2016 filly foal by Champion Candy Ride out of Sam-Son’s Danceforthecause fell to Samuel. He thought back to another racehorse whose career he’d followed decades earlier and saw an opportunity.

“I remember a horse running in the Derby or the Preakness,” recalls Samuel. “Part of the horse’s proceeds were going to help support  [a church or monastery]. Representatives from the church even came to the track and blessed the horse. It was a fun story.

¡Listo!  Argentina’s Candy Ride plus Canada’s Dance For The Cause became Rideforthecause.

Samuel’s partners agreed that hers was an eponymous name: Rideforthecause should ride for the cause, with her Canadian track earnings being made available to organizations that support her owners’ convictions.

“You never know what the future is going to be with a racehorse,” says Samuel. “They may never make it to the track, they may become a hunter prospect, or a recreational horse. But if she were to do well, what a nice story that would be.”

Do well she did. Included in Rideforthecause’s five wins was the 2020 Canadian Stakes (G2) at Woodbine.

The partners had agreed to disburse her earnings among three charitable organizations: LongRun, a Thoroughbred retirement facility in Canada; Connected North, which brings digital education resources to indigenous children in remote areas of Canada; and JustWorld, which supports education and nutrition programs, primarily for impoverished children, in several countries.

After deciding to disperse their racehorses and breeding stock last year, the partners also determined it was time to “settle up” Rideforthecause’s earnings, as promised, to the agreed-upon charities.

By this time, hers was a hefty purse.

“It was a wonderful story and a significant amount of money for all of them,” says Samuel. “It was just fantastic. And so beautifully named Rideforthecause lent itself so beautifully to that program.

“What was also important to us was to inspire that next generation of horse owners to do something similar, just as I had been inspired years ago. We wanted it to be a gift in the present, but also to have a legacy going forward.”

For their part, and in this year alone, JustWorld will aid an estimated 9,000 children in more than 40 countries, including local partners in Guatemala, Honduras, Cambodia, and the U.S. After receiving their gift from Sam-Son Farm, the organization started to brainstorm how they could continue to pay it forward.

“It’s such an inspiring story, and we really want [Rideforthecause’s] legacy to live on, perhaps [with other owners] using their horse winnings to donate back to JustWorld, to get them inspired to learn more about the project,” explains Ariana Coniglio, JustWorld’s development manager. “It really is a global campaign focused on equestrians.

JustWorld’s social initiative launched May 17, and it’s a game anyone can play. Here’s how it works:

Oh, and here’s the best part. When anyone follows these three steps, Rideforthecause’s purse gets $100 lighter in the form of a contribution to JustWorld.

How much is on the table? While the partners agreed not to disclose specific contribution amounts, “it’s more than $1,000” Samuel notes with a laugh.

“This isn’t the first time we’ve stepped up to support JustWorld,” notes Samuel. “We’ve supported their project in Guatemala, helping enable a performance center there. We previously did an end-of-year campaign, a few years ago, matching dollar-for-dollar. We’re happy to be the people who came up with the first idea.

“I’m trying to encourage JustWorld to develop new champions who will step forward and put their horses into this program as well. It would be great if we could get a high-profile horse in Europe, in North America—hunter/jumpers, Thoroughbreds, even polo horses. We’re big believers in the cause.”

Given the problems that have plagued Thoroughbred racing over the past few years, Samuel sees an opportunity for the industry to step up. “There are so many good people in the sport who are not caught up in the troubles,” he says. “They want to be part of the ‘feel-good’ side of their sport again, to connect and share their passion in a positive way with the rest of the world.”

JustWorld has posted information on the #Rideforthecause campaign on its website. The organization will be spreading awareness of its programs during summer horse shows at Thunderbird Park in Victoria, BC, Canada; in the U.S. at the Traverse City Horse Show in Michigan; and at the Hampton Classic in Bridgehampton, NY from Aug. 29 – Sept. 5, with future visits to be announced.

Oh, and if you’re curious, Rideforthecause—the horse—has moved from the chilly climes of Canada to the sun-splashed coast of Southern California. The five-year-old is still running; still doing well, too, winning the Possibly Perfect Stakes at Santa Anita on June 13.