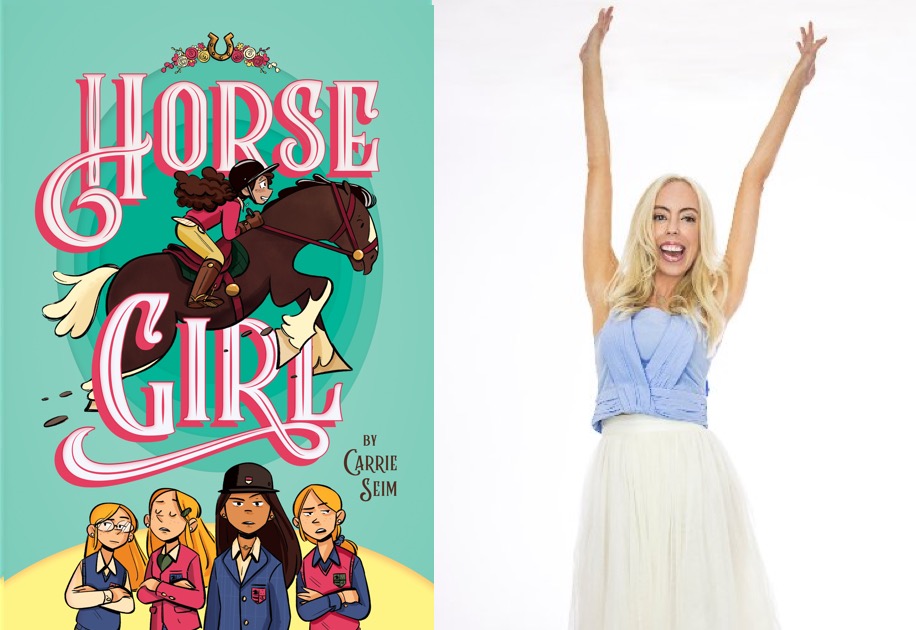 Amara’s voice echoes through the indoor riding ring as she and Silver Streak—a gorgeous, leggy black jumper—canter toward a wooden fence in perfect rhythm. Even their glossy ponytails bounce at the exact same time. Which is completely annoying. And then mesmerizing. And then annoying for tricking me into being mesmerized. Ugh.

Amara is oh-so­politely warning everyone at Oakwood Riding Academy to get out of her way. Move it or lose it, breeches. She’s basically Queen of the #HorseGirls (as her T­shirt helpfully explains to anyone who wasn’t clear on this point), so we all click­click at our steeds, who scatter like stable mice.

Or at least they’re supposed to.

I, however, am perched on Clyde Lee—one of the oldest, giant-est, willful-est horses at Oakwood. Clyde is half Clydesdale, half thoroughbred, and 100 percent not budging.

He and I got matched up because I’m what they call a “novice” rider, aka “inexperienced,” aka “Peasant of the #HorseGirls.” Clyde is massive—several hands higher than any other horse here—a sturdy bay with white feathers on three of his fetlocks and an ivory blaze down his muzzle, sort of like he got caught with his nose and three hooves in a jar of vanilla frosting.[1]

Which, um, I can relate.

Being half draft horse, he’s what my grandmother would call “big boned”—Clyde wasn’t bred for delicate dressage or breezy show jumping. His hooves are each the size of a medium pizza! But he works his heart out in the ring. And he’s always down for a snack. In other words, we totally get each other.[2]

I’m not sure if I was built for my life, either. My name might as well be “Wow, You’re Tall for a Girl.” And let’s face it—walking my Breyer model horses through the miniature jump course in my bedroom and wearing breeches to school might have been cute in fourth grade, but it makes me certifiably dork­tagious in seventh. (In my defense: 1. It’s a visualization exercise! 2. Breeches were invented way before yoga pants. You do your athleisure and I’ll do mine.)[3]

I honestly don’t care if everyone at school thinks I’m a horse-girl weirdo. I think anyone who doesn’t love horses is a weirdo. Ponies are my passion, and I am leaning in.

Unfortunately, Clyde is only mine on lesson days. My family can’t afford our own horse, unlike most of the girls at Oakwood, who were practically born in a tack room. So we have to make the most of our time together.

Clyde Lee may be “just” a stable horse, but that “just” is the single best thing to happen in my entire life. On the day of my riding lessons, I run (gallop) home from school and fly up to my room as fast as my clumsy feet can go.

I usually throw on my favorite practice shirt—barn hair, don’t care—over the aforementioned breeches, which I’ve had on since approximately 7:00 a.m. I braid my frizzy waves into two tight halos, tug on my boots, and snap on my velvet helmet. Ta­da, I’m ready!

Roughly two hours before my lesson.

“Nice crash helmet, Wills!” My dad finds this joke equally funny every time he says it. He thinks my turnout—the fancy word for gear worn by #HorseGirls and their steeds—is hilarious. I find his cargo shorts and dad sneakers similarly hilarious.

And by the way, my real name is Willa, but everyone seems to find that extra syllable just a liiiiittle too much effort, so across the universe, I am known as Wills. (Even Amara’s name soars through the air. Just say it: Amaaaaaara. Now try Wills . . . thud.)

But when we’re finally at the stable, Clyde doesn’t care what my name is or how many times I have gently nudged his flanks, asking him to please, pretty please, move. He only cares about staying right here. In this exact spot. For the rest of time.

My tongue flicks out another click­click.

Nothing. I lean forward in my saddle, then pull one of his reins to the right, hoping he might turn a little and slide into gear.

“Come on, boy,” I whisper as Amara glares at me. “I know you need your me-time, but must it be right now?”

It must, apparently. “I have snacks back at the paddock,” I quietly plead. “Carrots! Apples! These all could be yours!”

“Heads up!” Amara calls out again—several notes shriller this time—circling around for a second approach.

She’s aiming for an oxer jump—two green­and­white­striped rails that can be configured a bunch of ways but are currently staggered so that the front pole is a bit lower than the back—in the center of the ring.

Exactly where Clyde has parked us. Since I’ve been taking riding lessons for only a couple of months, we aren’t supposed to be anywhere near the oxer.

Clyde and I are supposed to be working on ground poles. That’s when my instructor, Georgia, lays a few wooden rails flat on the ground, then Clyde and I practice the steps and pace and positions and idea of jumping without, you know, actually jumping.

And we’re supposed to get the heck out of the way when the real jumpers come through. That was the first thing Georgia taught us on day one. The number one, most important, brand-this-in-your-brain rule. Otherwise, someone could get hurt.

Or worse . . . annoy Amara. Who has just veered around us yet again. (Ugh!!) Even Silver Streak is glaring at me now, nostrils flared.

Everyone at Oakwood—Georgia, the other girls taking lessons, the stable hands, several camera-phone-wielding parents, Amara, and even (I swear) Silver Streak turn to look at him as he loudly “encourages me” from the side of the ring. OMG. OMG.

Oh no, Luis Valdez and Gray Dawson are looking, too! (They’re the only boys who take lessons at Oakwood, and they’re a grade older than me, but since they don’t know I exist, I try to keep the feeling mutual. Plus, if I glance at them, my cheeks liquefy into a shade of extra-hot salsa, which is not a cute look on me.)

I bend toward Clyde’s ear, trying to hide my scarlet face in his black mane.

“Clyde, I’m going to tell you a secret,” I breathe. “You are the only one in the entire world who can save me right now. Everyone is watching us. Are you familiar with the term ‘social outcast’?”

There’s no response. Guess that’s a no. He’s too busy enjoying his new career as a frozen ice sculpture.

“Georgia?” she trills in a sickly sweet voice. “Wills doesn’t seem to be paying attention?”

Wait, Amara knows my name? Oh. Of course she does, since my dad just blared it across the stable.

“Remember your training, Wills,” Georgia chimes in. I take a breath and snap into focus.

“Go!” I command, giving Clyde a firm squeeze with my calves and shifting my weight forward in one last, desperate attempt to save us from certain horse­girl ruin.

By some miracle, Clyde trots forward. Maybe I gave him clearer direction this time, maybe he reconsidered the apple offer, or maybe he’s just as afraid of Amara as I am. In any case, we make it out of the way—but just barely. Sweet relief!

Amara and Silver Streak gallop toward the jump—Amara in a two­point position, hovering just above his back. She gathers her reins and leans into his neck, the thoroughbred gracefully lifts his legs in the air, and she sinks closer to him as they float . . . majestically . . . magically . . . effortlessly . . . through the air.

Everyone in the stable stares, spellbound. I hold my breath. The world seems to slow down as I, too, lean forward and shift in my own saddle—soaring vicariously with them.

Except I am now moving. And it is not vicarious.

Apparently energized by a serious case of FOMO, Clyde decides he won’t be left behind at the boring ground poles. He strides closer and closer to the oxer as I jostle in my seat, barely clinging to the reins as one of my clumsy feet slips out of its stirrup.

I slide off­kilter, slithering down the saddle leather. Suddenly the arena is zipping past me sideways as Clyde’s medium­pizza hooves gallop away. Galumph­galumph-galumph!

“Whoa!” I yell, tightening my abs and attempting to grip the reins from my diagonal, half-­upside­down position.

And just as he’s beginning to stretch his neck into a gigantic leap, snatching us both into the Air o’ Doom, Clyde—for once—listens to me.

He slams on the brakes, stopping short and veering left.

My body, still screaming along at full speed, misses the memo, flipping above the saddle and then—wheeeeeeeee!—straight over the top rail of the oxer.

And into the dirt. Thud.

Check out “Horse Girl” author and comedy writer Carrie Seim’s interview with host Gretchen Lida as things take a hilarious (and sometimes awkward) turn on this episode of HN Reads!

[1] Fetlocks are joints on horses’ legs just above their hooves. Some horses grow long, swishy “feathers” there—kind of like it’s spirit day and they tied pom-poms to their ankles.

[2] Draft horses are GINORMOUS and bred to pull sleds and other heavy stuff. They’re not built for dressage (a fancy sport where riders guide horses through teeny, tiny, delicate dances) or show jumping. Imagine the Rock trying to perform a dainty ballet leap—that’s basically me and Clyde.

[3] Who needs yoga pants? Breeches are stretchy pants with suede patches to help you stay on the saddle—and they look super sassy with boots. They’re at the top of every #HorseGirl’s wish list!