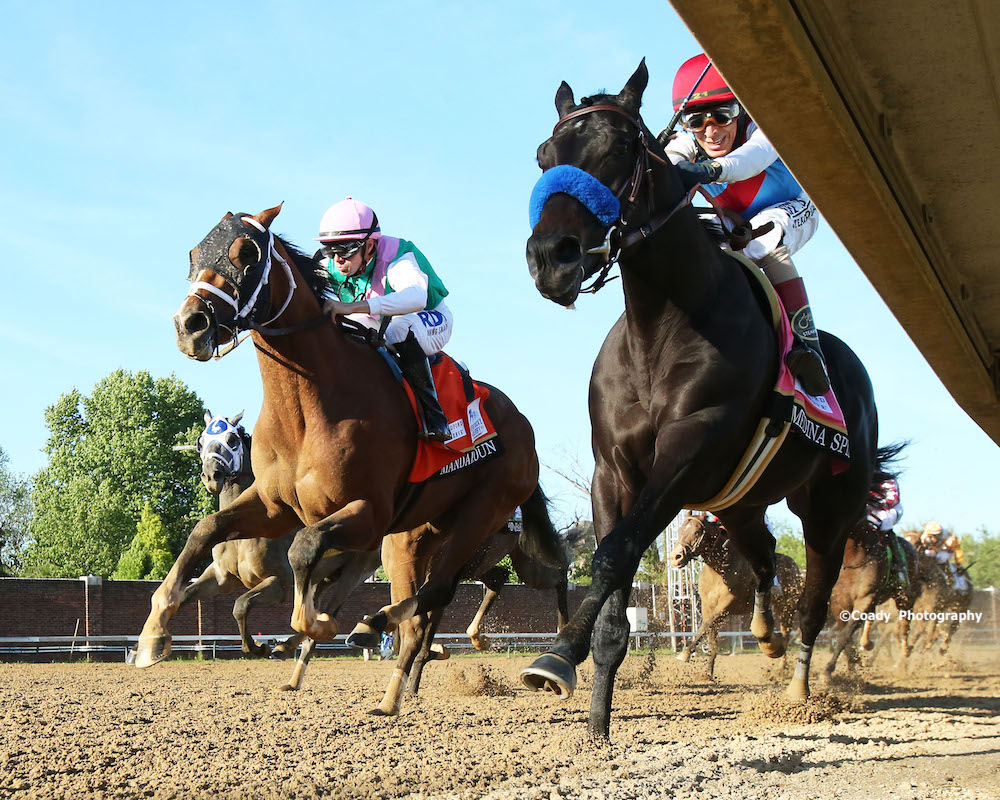 As the United States begins to emerge from the COVID-19 pandemic, Americans find themselves gripped by a wave of inflation. Home and gasoline prices are at their highest levels since the beginning of the end of The Great Recession in 2008.

Supply chain and shipping backups have made buying a new car near impossible with the available short supply selling for thousands of dollars over the original sticker price. Planning a summer getaway? That rental car will cost more than your airfare or hotel. A weekend rental from Enterprise that could be had for $39 for a weekend pre-pandemic now costs $135—a day!

But perhaps the most inflated commodity in America right now is horse urine, at least that of the current Kentucky Derby winner, Medina Spirit.

To put that in perspective, 20 ml is less than half the amount contained in a 50 ml “shooter” of liquor.

Medina Spirit tested positive for 23 picograms (23 trillionths of a gram) of the substance betamethasone following his Derby win. The substance is allowable but prohibited in any amount on raceday. Baffert has claimed the topical compound Otomax, which contains betamethasone as one ingredient, was applied to a help heal a rash on Medina Spirit’s right hind quarter. Photographs taken before and after the Derby, which appeared in the Daily Racing Form, confirmed the presence of the rash and its improvement.

Injectable betamethasone can be used to mask more serious problems. A corticosteroid, not an anabolic, topical substances containing betamethasone are a “go-to” medication for skin conditions in both animals and humans when the precise cause of a skin rash—fungal, bacterial or viral—is unknown. However, the KHRC rule, which was stiffened last August to allow zero tolerance from a previous 11 picograms, makes no distinction between the methods of application.

Following a positive test of the horse’s blood split-sample by a different lab, Churchill Downs Inc. (CDI) immediately suspended Baffert from stabling, training or racing for a period of two years at any of the racing facilities owned by CDI. This includes not only Louisville’s Churchill Downs, but also Arlington in that Chicago suburb, Fair Grounds in New Orleans and Presque Isle Downs in Erie, PA, as well as several other facilities.

In a separate legal action, Baffert is contesting a similar ban from the New York Racing Association (NYRA) that would keep him from racing in this summer’s famed Saratoga meet among others.

Despite the duplicate positive tests, the KHRC has yet to strip Medina Spirit of his Derby victory and declare runner-up Mandaloun the winner, a step it said it would take, in a statement issued at the time of the initial failed test, if the split-sample was also positive.

The urine sample allocation was a clear victory for the Baffert/Zedan team in what could be a long legal path toward allowing Medina Spirit to remain the winner of Derby 147, Baffert to keep his record-breaking seventh Derby victory and connections to keep the $1.68 million winner’s purse.

The KHRC in its defense sought precisely the opposite: that representatives of Baffert and Zedan Racing be granted only 5 ml and for the Commission to retain the rest. This, argued the successful plaintiffs, would be insufficient to test for clotrimazole, gentamicin and valerate, compounds found in the topical that are not present in the injectable form.

Judge Wingate stipulated the amount used for testing be only that “absolutely necessary” and that any residual be returned to the KHRC.

The ruling came after the parties were unable to come to an agreement about how to allocate the urine sample. In an initial hearing last week, Wingate urged the parties to find a solution acceptable to both sides.

“This is a case of very high importance to the state of Kentucky and you each need to try to work it out if you care anything about horse racing in the state, which everybody does,” Wingate said at the time.

“This hasn’t happened since 1968,” continued the jurist. “This is somewhat of a black eye on the industry.”

In 1968, Dancer’s Image became the first disqualification in Derby history after testing positive for the then-banned substance phenylbutazone, an anti-inflammatory commonly known as “Bute” as it is commonly known. It can serve to mask a potentially serious injury. Forward Pass was declared the 94th Derby winner.

Medina Spirit’s would be the second DQ for presence of a substance banned on raceday and the third overall. Maximum Security was disqualified after the 2019 Derby for interference and Country House declared the winner.

The plaintiffs in this case seek to prove that Otomax was veterinarian recommended and administered in topical form to treat the apparent rash, a use that would serve the welfare of the horse.

The ultimate goal of the Baffert team is clearly to challenge the KHRC rule itself and its lack of distinction between method of application and purpose.

“The whole basis for making certain drugs certain classes—A, B, C, D—depends on the underlying research and reports,” said Clark Brewster, who represents Zedan. “All of the basis for betamethasone has been, ‘Let’s stop the conduct of injecting joints too much or too close to a race.’ It has nothing to do with the topical.”

The presence of Judge Wingate on the bench had to be consoling to the Baffert team: this is not his “first rodeo.”

In 2015, Trainer H. Graham Motion was fined $500 and suspended five days by stewards when Kitten’s Point tested positive for methocarbamol after winning the Bewitch Stakes (G3T) at Keeneland. Methocarbamol is used to treat muscle spasms. Kitten’s Point owners were denied the $90,000 purse. Motion could have accepted the relatively light penalty but chose instead to take his case to court “on principle.”

After two years of litigation, a Kentucky court overturned the finding and ruled in favor of Motion. The ruling stipulated that threshold guidelines need to be based “on science.”

“Without scientific evidence providing more than the wildest speculative reasoning for imposing a penalty, the Kentucky Horse Racing Commission would have unfettered power to regulate all substances with which a horse could come in contact,” read the decision.

The judge writing the ruling in that case? Judge Wingate, also of the same Franklin County, KY Circuit Court.

The ruling called into question the State’s adoption of guidelines set by the Racing Medication and Testing Consortium.

Scollay has said whether a substance was injected or absorbed through a topical ointment makes no difference. Any presence of betamethasone on race day should mean a “non-negotiable” disqualification.

While the Consortium has set recommended guidelines, not all of the 38 racing jurisdictions in the United States have adopted them. This circumstance, critics argue, makes it difficult for horse veterinarians and trainers to properly remain within each jurisdiction’s rules.

The recently passed Horseracing Safety and Integrity Act (HISA) is set to become Federal law no later than July 1, 2022. Among other features of the Act, HISA will create a uniform set of medication guidelines for use in all 38 jurisdictions for a period of five years after which time each jurisdiction will have to choose to “opt-in.”

In a less well-known part of that same ruling, Judge Wingate also declared as “unconstitutional” Kentucky’s “absolute insurer rule,” which places ultimate responsibility for what’s in a horse’s system on the trainer.

“It cost a lot of money, and time, and emotional heartache,” said Motion’s attorney W. Craig Robertson at the time. “Litigation is not easy. I told him [Motion] he deserved a big pat on the back from all horsemen because not a lot of people would have gone this far.”

Robertson also has represented Baffert in other cases.

The 20 ml allocated by Judge Wingate to the Baffert team will be tested in New York by the only lab accredited by the Racing Medication and Testing Consortium, the New York Drug Testing and Research Program in Ithaca, the only point on which the parties could agree.

During last week’s initial hearing, Judge Wingate proposed in his original country-judge way that whatever size sample was allocated for testing take a road trip to New York by car with representatives of the dissenting parties sharing the ride.

Instead, America’s most precious pee will take to the air.

So, if you’re thinking $1.68 million for less than half a shooter of urine is inflated, the Baffert/Zedan team will also be picking up the tab for a private jet to fly it to New York.