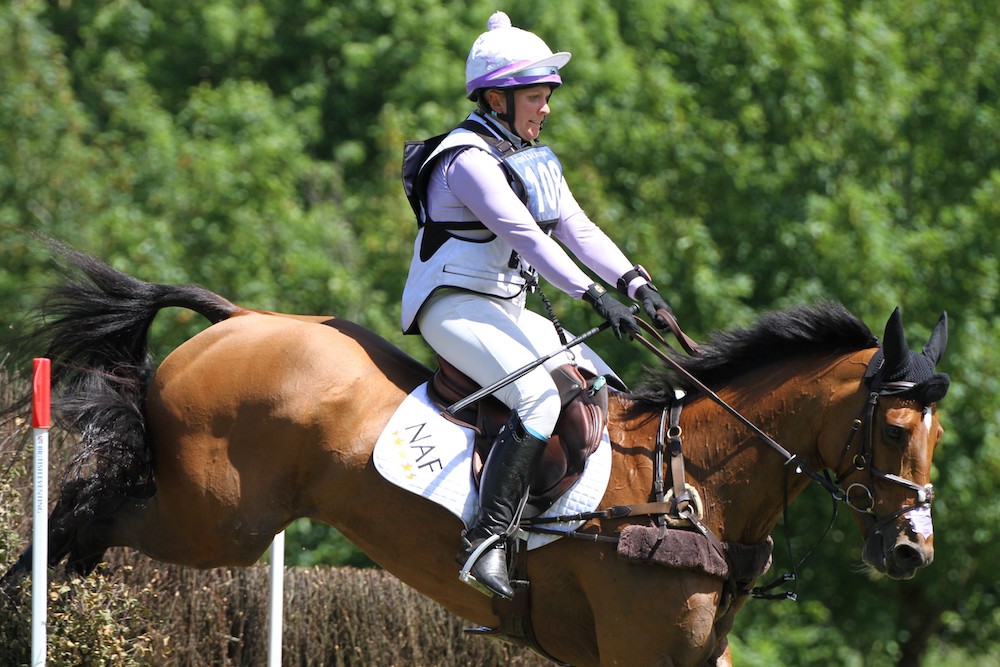 The CCI4* Bicton International Horse Trials in the UK is being contested by a host of Olympic hopefuls from several nations. But it was a rider who has not made the short list that set the Devon venue alight.

Nicola Wilson (GBR) and JL Dublin are going into the last phase of the CCI4*-L with first place on a score of 28.7 penalties. The European bronze medallist of 2017 is sitting with a tiny lead over the still reigning Badminton champions Piggy March (GBR) and Vanir Kamira (29.9pp) and Rosalind Canter (GBR) and Lordships Graffalo (30.6pp).

But in fourth place and also in tenth is a member of the British team in Rio and in Tryon, Gemma Tattersall, who rode two horses over Bicton’s undulations and got both home inside the time. The Sussex-based rider confessed to being somewhat nervous about her first 4* long format rides in almost 18 months, but onlookers would never have known once she got going—there was not the slightest sign of nerves as she produced two standout rounds with both Santiago Bay and Chilli Knight.

Despite plans to the contrary, Tattersall found herself hardly competing in 2020, even when the curtailed season resumed—“[it was] just the way it turned out.”

Discussing her cross country brilliance over a course that only approximately 50% of the starters completed, she credited the fitness of her mounts and her efficient track.

“I don’t know if I have a secret [for getting horses inside the time],” she said after her second ride, “but I do know how to get horses fit and these are fantastic horses. They jump out of a rhythm, and are easy to adjust so they don’t need to be set up and that, together with how nippy and quick they are, saves a lot of time.

“I think I also have a knack for riding ‘racing lines’ and making the shortest way home. I will admit it is a relief to have got it done after last season and then Badminton being cancelled, which was a massive disappointment to me as the horses were both ready to go when they pulled the plug.

“I know the course has been tough, but it is supposed to be a 4*. When you jump round one, you should be confident that your horse will be able to jump a 5*, and that has happened here. I think, with the other cancellations and things that Helen (West) and her team have done a fantastic job, to put this on at short notice and make such a fantastic event.”

World Champions Ros Canter and All Star B have set themselves up for a good cross country result in the CCI4* Short with a clean showjump round after their best dressage performance of the season so far—23 pp.

“I don’t really pay too much attention to my one day event results as I usually try to plan doing a few to get All Star B ready before I go to big event,” she shared.

“This year has been difficult as far as planning goes so today is the first time he has really felt sparkly in his dressage. He feels like he has gone up a step and everything is falling into place.”

Canter was sparkly herself in the long format class in which she is now lying third after one of only five rounds to make the time.

The section is being lead by her Tryon team mates Tom McEwen and Toledo de Kerser, who are looking good for Olympic selection, with Canter in second and another Tokyo hopeful, Kitty King, in third on Vendredi Biats.

In fourth place is Japan’s Kazuma Tomoto who rode a beautiful round of jumping on Vinci de la Vigne. Whatever happens in tomorrow’s cross country, it is safe to say, that shots have been fired with regard to Japanese intent for their home Olympic Games! His dressage and showjumping score of 23.5 is the best score at the level for a Japanese rider since 2008.

Tiana Coudray and Cancaras Girl were clear in the CCI-L for the USA. Logan Duffort (USA) was eliminated after a fall on course but horse and rider both walked away unhurt.