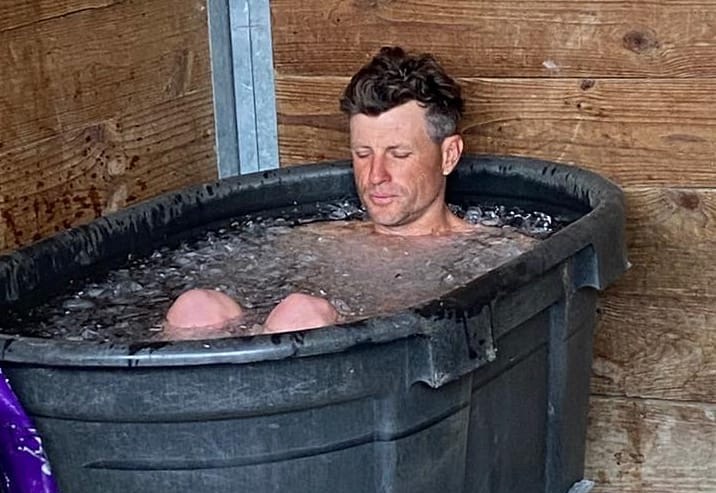 There’s a photo on Facebook this morning of newly crowned American national champion Boyd Martin sitting in a water trough filled with ice and looking…blissful?

Perhaps you’ve seen it and wondered why in the world would anyone choose to do that—let alone mid-competition of the most gruelling weekend of their show season? Is Martin a Wim “The Iceman” Hof enthusiast? Does he enjoy being unreasonably cold in already unseasonably cold conditions? Is he wearing shorts?!

Well, wonder no further, friends! We tracked down Martin to get answers to (most of) those pressing questions.

From the horse’s (in this case, Martin’s) mouth:

“I’ve been injured over the past few years and I’ve been pretty hard on my body over the last 30 years. I’m feeling a little bit old!

“I started taking these ice baths a few times a week last year. It’s almost a form of meditation and you start being comfortable with being uncomfortable. It does seem to give all the aches and pains a bit of relief. But it’s not actually what I would call enjoyable.

“[At the Land Rover Kentucky Three-Day Event on Saturday] I had crash on my first horse [Long Island T] in the morning on cross-country and obviously I was feeling a bit stiff and sore and mentally a bit rocked. I jumped into the ice bath for five minutes and tried to slow my breathing down, get re-focused and figure out what it would take to get the second and third ones around.

“I’m a big fan Joe Rogan. I listen to his podcasts and he talks to a lot of high level athletes. He’d be one I’d recommend highly. I’ve decided there’s no shame at failing when you’ve really had a go at it. I’d rather go down trying to win the contest than play it safe these days.”

And THAT is what we call “a committed athlete.” Still wondering about the shorts situation though…