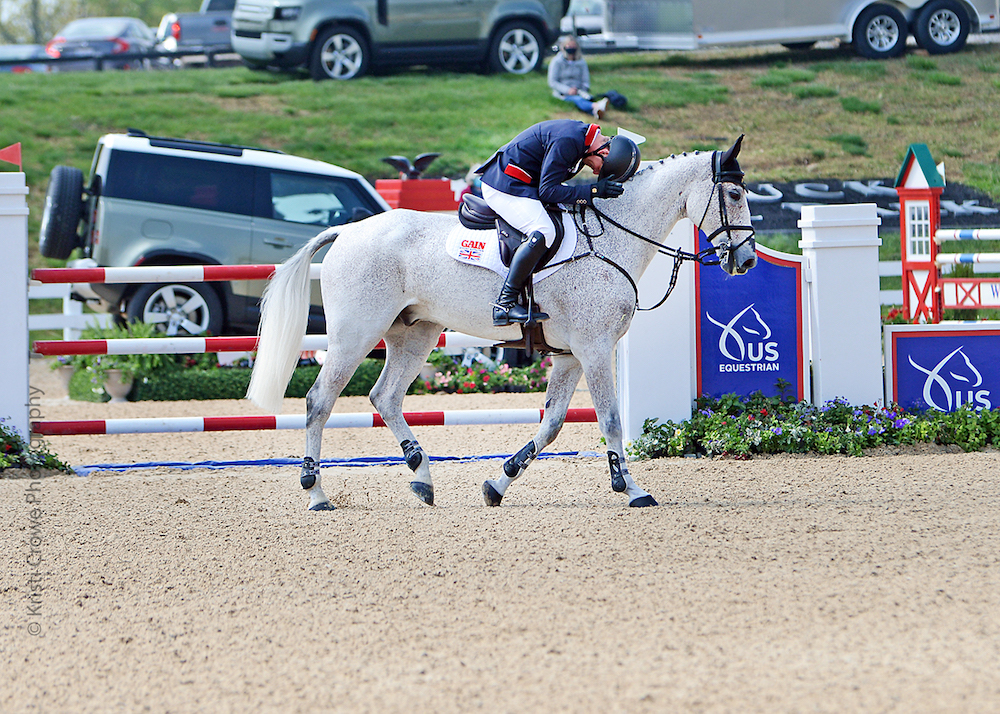 It would be easy to call Oliver Townend’s three-peat at the Land Rover Kentucky Three Day Event (LRK3DE) a fairytale finish for a fairytale event. But that wouldn’t do justice to the rider, Ballaghmor Class, the event, or the eventing community who came together to make the 2021 event happen.

“In a state that leads the country in amazing equestrian events, this one is a highlight every year.”

Two-time defending champion and now three-time LRK3DE champion, Townend (GBR) could be forgiven for thinking the universe might be conspiring against him this week, just for a minute.

Both of his horses pulled shoes on Saturday’s gruelling cross-country course. Then Sunday morning his first horse (on whom he won the past two events) Cooley Master Class was ‘spun’ at the jog and eliminated from the competition. Fortunately, he had Ballaghmor Class up his sleeve, a horse who has yet to finish outside of the top five in any five-star competition. All they needed was a fast and clean show jumping round to stay on 27.3pp and hold on to the lead.

In a testament to the quality of the competitors, the top seven placings didn’t have a rail to spare between them coming into Sunday’s third and final phase of competition. In some cases, it came down to just one second, or a fraction of a time-fault, in hand to avoid dropping a placing or more.

In the final test of a long-format three day event, competitors show-jump in reverse order of standing, which gives the advantage of studying the course to whomever is in the lead and it ensures an exciting finish for spectators!

One by one, riders added rails and time faults to their scores as the leaderboard shuffled back and forth and riders jockeyed for final positions. It came down to the final handful, and Oliver’s nerves of steel. A clean round inside the time by Tim Price (NZL) on Xavier Faer left no margin for error.

“In Yorkshire they say pressure is only for car tyres,” joked Townend at the final press conference. “At home we’re always competing against each other, it’s very competitive in England so you kind of get used to the feeling [of knowing you’re riding against the best.] You can never write these guys off. You can never expect Tim Price and Xavier Faer to go in and jump anything other than clean.

“Today my horse went in and I’ve never felt him as good. It’s what’s so special about our sport—the exciting finish when there’s no margin for error. I don’t think there could have been a better finale than this.

“It means so much to be here. I’m extremely emotional, but to be here is just so special. It’s such a huge team effort both on your side and on my side and for us to come together and enjoy such amazing sport in the best venue in the world is very special.”

The best horses in any discipline are always unique (some might say freaks). When asked what makes Ballaghmore Class so special, Oliver praised his power.

“He’s got an extra gear in comparison to most horses. He used to ‘go’ when you didn’t want him to, but now he’s got an extreme amount of power and talent and he knows his job. He was jumping exceptionally well today, which makes my job very easy. He’s a big jumper and can be quite slow in how he does things, so it’s easy to have time penalties. I generally need to make sure I’m not slow on time.”

The win marks Townend’s third consecutive victory at Kentucky. The world number one ranked rider won in 2018, 2019 and now again in 2021, on two different horses. (LRK3DE was cancelled in 2020 due to COVID-19). In doing so, he secured his title as one of only two riders in the 43-year history of the event to win three in a row—the other being eventing legend Michael Jung (GER).

Runners up, Price and Xavier Faer were the only pair to finish on their dressage score this weekend, 28.2pp. No stranger to a podium finish, the world number two was one of just four double-clean rounds on cross-country day and one of just a handful today.

Third position went to Jonelle Price (NZL) with her third ride of the weekend, Grovine de Reve. Jonelle jumped a double-clear earlier with her veteran campaigner Classic Moet, and this time added just 0.4pp to her score to take third (30.7pp).

Finishing in fourth and taking the USEF 5* National Championship, Boyd Martin (USA) and On Cue would have liked to have put an end to 13 years of foreign winners, but it was not to be. One rail on course left them with a final score of 31.8, not enough to overtake Townend or both Prices.

“I’m thrilled with On Cue—obviously when you bring a horse to this level for the first time you don’t know what to expect,” said Boyd. “She gave everything she had this weekend and really stepped up and tried her guts out. I would have loved to have jumped clear today but having one pole down in this company is still pretty respectable.”

Harry Meade (GBR) and Superstition whose return to upper level competition following his massive head injury last year is nothing short of incredible. They finished in fifth position on 33.6pp.

With his win this weekend, Townend becomes the new “live contender” in the Rolex Grand Slam of Eventing by winning in Kentucky.

Clean rounds were hard to come by all weekend in the CCI4*-S division, but U25 developing rider Alyssa Phillips and her chipper mount Oskar managed two when it really counted—on cross-country Saturday and again in the stadium ring Sunday to clinch the win in the inaugural Lexington Four Star at the Kentucky Horse Park.

Riding in reverse order of standing, Phillips and Oskar, who had the fastest cross-country round under abysmal conditions Saturday, entered the ring second to last. They got very lucky with a couple of heart-stopping hard rubs over Sunday’s expansive stadium course. But their luck held and they produced the vital double-clean needed to stay on 37.9pp and put the pressure on the leader Tamie Smith with En Vogue.

Smith’s hopes for a wire-to-wire victory were dashed when En Vogue pulled a rail at 9A, the first of the triple combination, at which point victory was assured for Phillips. (Smith and En Vogue finished on 40.2pp to take second).

“I thrive under pressure,” said Phillips, who began her riding career riding western before making her way up the Pony Club ranks. “He knows when it’s a big show. Most of the time he’s pretty chill and lazy but he really brightens up and likes to show off. I’ve had a fantastic season and I’m really excited for the whole string of horses I have right now. The win this weekend just tops everything off.”

Runner-up Smith was the first to congratulate Phillips with a hug and kind word.

“It’s part of sport,” she said. “I’ve known Alyssa for a long time and we’re friends. She deserved the win today! My horse was great and just ticked the rail and it came down. That’s how it goes.”

And so ends another epic edition of #bestweekendallyear. It seems only fitting to end by thanking, one more time, everyone who pulled together under the most extreme circumstances and timeline to ensure the LRK3DE would happen in 2021. More than ever this year felt like a group effort and although we weren’t able to be there in person, we were certainly there in spirit.

Let’s hope this time next year we’re all celebrating in the bluegrass!