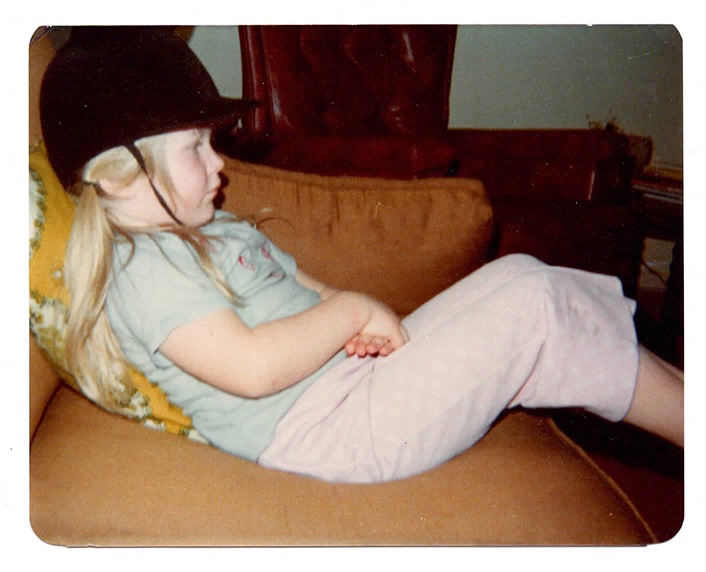 My childhood memories are a blur of horses and ponies, horse shows and Pony Club, trail rides and riding lessons.

I don’t remember much about school or friends that didn’t ride. Just naughty ponies, horsey friends and my riding outfits—the latter being as important as the former.

I had a thing for outfits when I was five. I joined Brownies because I fancied the brown uniform and tam o’shanter and I did a short stint in Highland dancing because of the kilt, knee-high socks and lacey shoes.

But those were short-lived dalliances. It took one Brownie meeting for me to get annoyed and bid the group good day. I had no such qualms with the Highland dancing, but I lacked the finesse of a dancer. I kept the shoes to wear about the house and focused my attention on the world of horses and all the clothes offered therewithin.

I wasn’t discipline-specific in the early days, which left the door open to play with more getups.

My attempt at western wear, questionable even in the 70s, doubled as my sports day gear. The red and white patchwork motif reminded me of my bedspread and the flowers were just fun. I paired this pantsuit with white gumboots and a red straw hat, with a complimentary whistle, from the corner store.

It wasn’t long before I grew out of the flower power western suit and my parents, keen to dress me in something more realistic, decided purple chaps and a gray cowboy hat were the upgrades needed to produce a winning performance. While my parent’s intentions were probably good, I looked like a lost member of the Clampett family.

My English outfit was some kind of piecemeal effort pulled together in a panic. Jodhpurs were, evidently, still a thing, my riding jacket was part of my Highland dancing uniform and the pink collared t-shirt was more of a “that should work” piece.

As I grew the jodhpurs were traded for breeches and my dance blazer was replaced with something in tweed. I was young and thought all my outfits were great, but my riding hat and boots held a special place in my heart.

This was a time when safety gave way to fashion and concussions were a thing of the future. It was an era of “stop your snivelling and get back on.” My helmet was really a black velvet hunt cap with the customary ribbon on the back and the harness was an elastic my mom tied in a knot for a snug fit.

My riding boots were probably my favorite because they could be worn in public and denoted superiority. I wore them to school no matter the weather because it sent a message to the other kids that I had a pony, and they didn’t.

The riding boots were glorified galoshes molded to resemble, though loosely, leather riding boots. The toe was square, there was a spur rest on the back, which I felt was a built-in spur, and the rubber had a faint ridge to give the illusion of stitching.

My upgrade from those first pair of rubber boots was a second pair—complete with the same spur rest and faint ridges of pretend needlework. These, however, had a rounded toe and the added feature of a thick, foam-like liner designed for comfort, which, when I pulled the boots off, was inevitably sucked out with my foot leaving a prolapsed boot in its wake. I’d stuff it back in, but the comfort was lost. Naturally, I pushed on without complaint because I rode horses and that was what mattered.

It was around this time I declared myself an event rider, a calling that demanded two or three outfits, depending on how dressagey I wanted to look. The newest and most exciting edition was the cross-country attire.

The phase of the brave and colourful. A rough and ready bunch game to tackle any obstacle that got in our way and even though the jumps were about two feet I felt I was an event rider through and through, and proper eventers wore untucked jerseys. I took my dad’s old red and white rugby jersey and in one fell swoop I looked the part and my colors were established.

As I morphed into a teen, I managed to talk my parents into buying me leather boots, and, because I am a spoilt only child, my mom opted for custom.

Now, when it comes to human leg confirmation I’d say, measurement-wise, my calf dimensions appear unrealistic. A fun joke to play on an unsuspecting bootmaker. It, regrettably, isn’t a joke and I’m sure the cobbler was left thinking, dear god, what must this unfortunate soul look like?

I have short shapely legs, and my calf length and width differ by only one or two inches depending on my weight at the time. To confuse matters, I was gifted with tight well-defined ankle and knee joints thus creating a diamond-shape. And in leather boot construction at a time before zippers, this meant a large gap at the top—perfect for packing a small lunch and a mickey of tequila.

My new and safe velvet helmet had a detachable harness, which allowed me to move seamlessly from the dressage ring to the show jump ring. The big question was, do I go with a brown harness, or do I want to trick everyone with a clear plastic one?

As the years progressed so did the evolution of blending safety with fashion and the final show helmet of my riding career was blue velvet, with a leather none-detachable harness and the customary ribbon on the back. It is beautiful and now collects dust on my mantel.

Jerseys grew out of favor due in part to the creation of back protectors and the t-shirts worn beneath. I’m all for safety. I just wish it didn’t come at the expense of vanity.

Sure, my cross-country vest could save me if I found myself under my horse’s galloping hooves, but when that wasn’t occurring, I had complaint. Once sat on my horse my belly was framed between the top of my breeches and the bottom of my body protector, squished into an unsightly and shameful protrusion from which there was no escape.

My show coat was navy with red and silver pinstripes, and it was dry cleaned once every five years or so. Back in those days the coats were made of unforgiving wool. As I aged, my weight fluctuated, which led to an ever-present fear of splitting the jacket where seams had weakened. The buttons, the few that remained, had the potential to spring free at any moment as they were normally under a fair amount of stress. It was vital to have a container of safety pins close at hand as well as a fat and a skinny show coat.

This was just the way of things back then, and we got on with it because we didn’t know any different.

The day I stopped competing, the horse show world went through a seismic shift in fashion. I exited while we were corseted into coats and boots. I turned around and all of a sudden show coats were thin, stretchy, ventilated and machine washable and come in a range of fun colors.

Air vests were invented that cover up some of the gut and save even more lives than a back protector alone. All riding boots, even those off the rack, have a zipper up the back flanked with elastic so even those of us with questionable leg conformation look good in tall boots. And to rub a little salt into the wound, competing in half chaps and paddock boots is sometimes acceptable.

Riding helmets are safer still and the sparkly, shiny or colorful outer shell has deleted the once plush finish and ribbon on the back.

Where was all this when I was riding? I have the very sort of body that would have revelled in these new creations. Perhaps if these new fandangled show clothes were available when I was competing, I would have made it to the Olympics—my ability and talent unimpeded by the limitations of my non-stretch, non-zip, gut squishing wardrobe.

Alas, I missed out on the fanciness. But at least I now sleep easy at night knowing why I never made the team.

Feature image: Watching a little TV with my helmet on and “harness” done up.