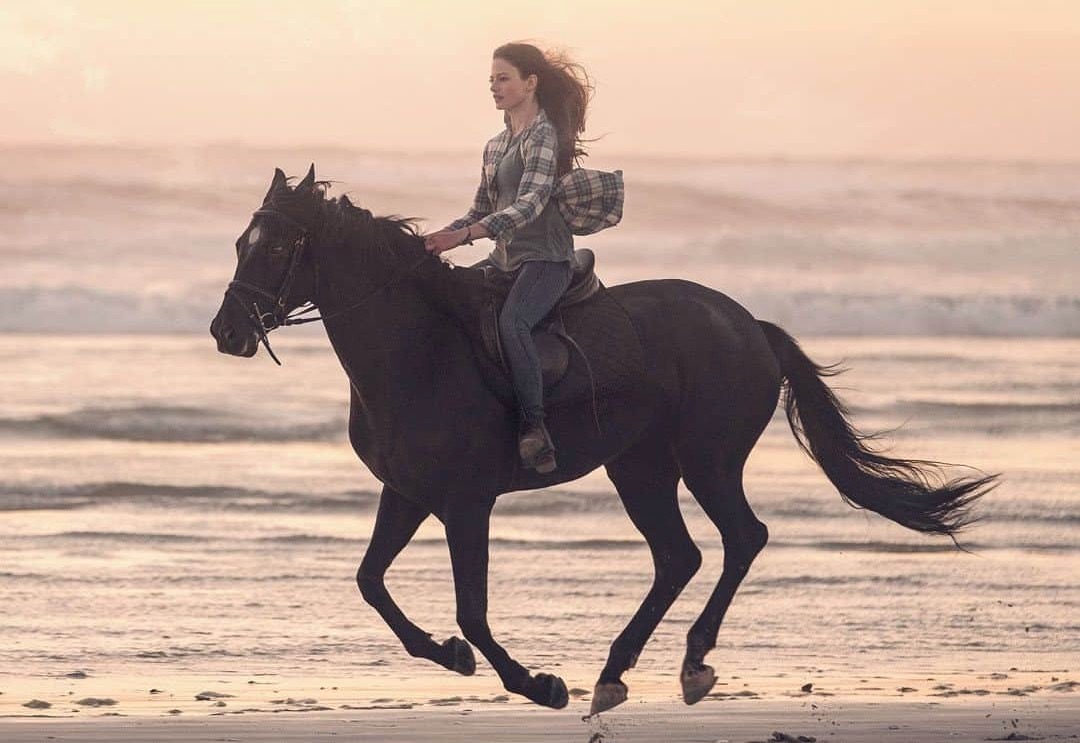 It’s four months late, but I finally watched the new adaptation of Black Beauty on Disney+. The truth is I had avoided it.

After seeing the gauzy trailer dripping with tired horse girl tropes, I wasn’t ready to stomach another watered down classic. Like many horse-crazy humans, I was wary of watching the sport and the animals I love lose their nuance and intricacy to be more “marketable for a wider audience.”

Much to my chagrin, all my worries were correct.

Yes, the 2020 Black Beauty was sweet and pretty, and actress Mackenzie Foy rides well. Nevertheless, the film felt like the crappy boyfriend who buys you flowers when he messes up, but deep down, you know he will never change his ways. As I watched, I wanted to reach into my screen, shake writer-director Ashley Avis and say, “Your heart is in the right place. It’s clear you like horses, but for heaven’s sake, lean in. Do something all the way or not at all.”

To give audiences an updated version of Anna Sewell’s 1877 novel, Avis sets the film in the modern-day. Coachman Joe Greene, a supporting character in the book, becomes teenage girl protagonist Jo Green, in the movie. Black Beauty is transformed from a carriage gelding in Victorian England to a Mustang mare in the United States.

In an interview on Horsemanship Radio, Avis noted that she wanted the film to bring awareness to the plight of America’s wild horses. The choice of portraying the horse as a Mustang could have been a compelling exploration of how versatile the breed is—had they used Mustangs.

Instead, Thoroughbreds and other sleek and leggy-looking horses played the part. In one scene, Jo’s love interest notes that Beauty is a Pryor Mountain Mustang. I wondered if the poor guy needed his eyes checked because there was not a horse in sight that matched the 14 hand, deep-chested stocky confirmation of that band. Kate Winslet, who voiced Beauty, often comes in with a platitude about the “Mustang Spirit.” Well, a Mustang spirit is all the horses have because they sure as well are not Mustangs.

Using the wrong breed of horse is common in movies, and if we were to write off every film that employs a substitute, there would not be much to watch. So, while infuriating, the Mustang thing is not the significant downfall of the movie; that would be the writing.

Perhaps the reason for Black Beauty’s longevity is its bittersweet complexity. It is not a happy story, yet its genius lies in its ability to show that both people’s choices and their circumstances trickle down into the lives of equines. Humanity’s cruelty and kindness to each other are reflected in their cruelty and kindness to Beauty and his friends as well.

While the 2020 version has moments of this genius, such as when a kindhearted backcountry ranger purchases Beauty, it is often flat and forced. Bits of the book and the new storyline are stuffed together so awkwardly that viewers can see the seams. In one scene, Beauty is doing a cross-country course. In another, she is pulling a surrey and meets Ginger, her best horse friend from the book. Old and new come together, and it is seldom satisfying.

To make matters worse, the plot often leaned too heavily on stereotypes. There were mean girls, abusive carriage drivers, a cruel show mom, and even a Prince Charming. Can’t these often-troubling tropes get an upgrade too?

In many ways, the 2020 adaption of Black Beauty was a missed opportunity. In two hours, we could have had an inventive film that looked at the perils, heartache, and triumphs of the modern horse. What we got is a film that flinched when things got hard and reached for comfortable clichés instead.