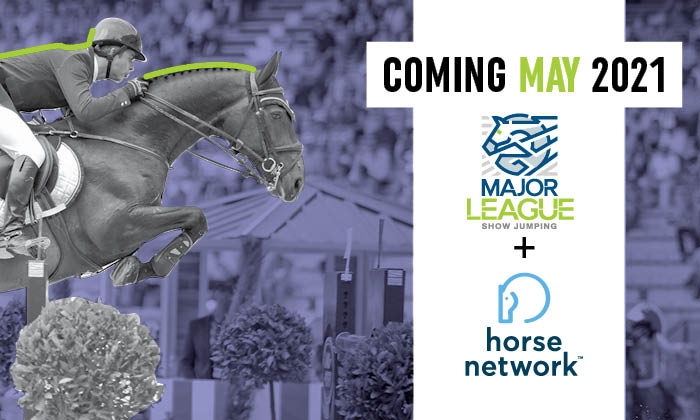 Major League Show Jumping (MLSJ) and Horse Network have joined forces to take horse sport fans behind the scenes on the thrilling new team show jumping tour as it sweeps North America in 2021.

Launching in May, Major League Show Jumping is a new 5* series that features eight teams of world class riders from 14 nations as they compete at ten elite events across Canada, the United States and Mexico. The partnership with Horse Network will highlight the triumphs and challenges of the inaugural MLSJ season as the teams vie for the 2021 title and show jumping glory.

“Horse Network is forward thinking and will bring new and unique ideas to bring our sport to a larger demographic in North America,” said MLSJ co-founder Keean White.

Following the season week by week, the Major League Show Jumping + Horse Network #FriendsWithBenefits campaign will feature an original, documentary-style video series that showcases the diverse personalities and inspiring stories of the eight MLSJ teams, as well as horse and rider stats, insider stories, fan contests, sports highlights and more to keep fans up-to-the-minute on every aspect of the 2021 season. All content published by Horse Network will be available free of charge and in readily sharable formats.

“Major League Show Jumping is the most ground-breaking series to come to the sport in North America,” said Horse Network Editor-in-Chief Carley Sparks. “We’re excited to take fans with us on every step of this journey as The League charts a reimagined path for team show jumping. Our mandate at Horse Network is to grow the sport. We can think of no better partner to do that with in 2021 than Major League Show Jumping.”

Kicking off in May at Thunderbird Show Park in Langley, BC, the 2021 Major League Show Jumping season will make stops in Traverse City, MI; Bromont, QC; Toronto, ON; San Miguel, MX; Monterrey, MX and Thermal, CA, culminating with the MLSJ Season Finale at Coachella, CA in December.