Saved By a Spur Strap 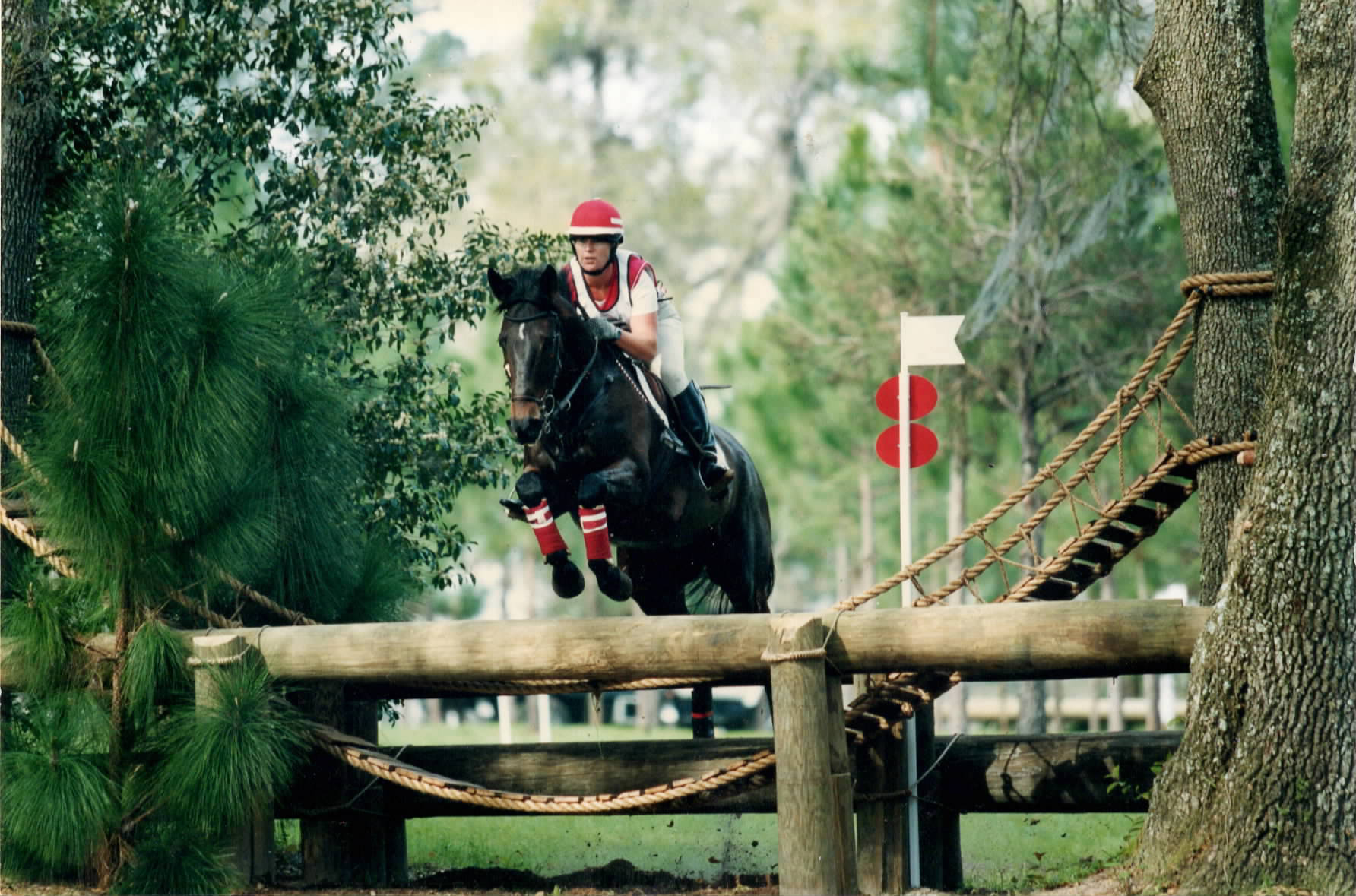 It happened between fences 10 and 11. The rare feeling of confusion as to why my arms had just swung past me of their own accord.

It was early in the season and I was having an easy hand gallop around a prelim cross-country. My horse, Zeus, was a bit of a goer and my coach told me to walk out of the start box and trot or canter fence one. After that, the plan was to gallop around in a low-key fashion. And it was going well.

I was turning right toward fence 11 when my bit broke, and when that happens everything just kind of goes backward.

Zeus turned left once he sensed freedom and pointed toward the trailer parking. To get there, however, was a maze of paddocks that would have to be negotiated. All I could see was an abundance of 90 degree turns and thought if he picked up the pace, we’d end up laying amongst the fence boards.

My only saving grace was a nylon spur strap in lieu of a curb chain, which was now acting as a sailor trapeze. Without it, I would have been laid out on his back in full repose.

Zeus had bolted on a cross country course with me a year or so prior and the memory shot to the forefront of my mind. If he bolts again and I have nothing but a spur strap pulled tight against his neck for control, we’re in trouble.

A lot of trouble.

The time he bolted, we were running training level. Nothing untoward happened between the start box and fence one. But somewhere on the way to fence two things changed. There was an unwanted surge of power I had never experienced in my 25 years of riding and in two or three strides I could tell something in his mind had switched.

Jump two was on a fence line and as we were heading directly for it—my suggestions of slowing ignored—I realized with a grim certainty we were going to jump it.

This took us into a field surrounded by a tight-knit cedar tree forest. I remember marveling at it when I walked the course and was surprised how dense it was. But it smelt nice and I thought no more about it.

We whizzed past fence three. Half halts and pulley reins were useless. I cursed the low port kimberwick bit with a gel-covered curb chain. I desperately pulled left and right, but the straight bar made it easy for Zeus to lean against. My attempts to slow him were futile and the bit slid back and forth on the frictionless track of his mouth.

I knew I was nothing more than decoration on his back and might as well have dropped the reins and assumed the crash position.

As we neared the far end of the field, Zeus had a decision to make. Turn right and be presented with a prelim table or remain straight and enter the forest. I didn’t relish the idea of jumping at such a speed and I didn’t care to enter the woods. But it wasn’t up to me.

Zeus went straight and entered the cedars like a hot knife through butter. I, on the other hand, was clotheslined off at the entrance and fell through the branches like a Price Is Right Plinko chip.

When I hit the ground, I cupped my face with my gloved hands making sure all the pieces were there. To this day, I have no idea why. I had no pain, there was no blood and I am not a model. Ensuring my “money maker” was intact was a ludicrous concern.

Two jump judges flew to my aid, helping me off the ground and sitting me down on one of their lawnchairs.

The cracking of branches allowed me to follow Zeus’s progress. When he exited the trees, the announcer picked up the action with warnings to competitors to vacate the dressage warm-up, and then the dressage rings, and then xc warm-up and then to keep an eye out in the trailer parking. When all corners of the show grounds were covered Zeus re-entered the forest.

Branches were snapping, people were running, and I was still sitting on a foldable nylon lawn chair trying to gather myself.

Eventually, Zeus embedded himself so deep into the dense trees he could no longer move. A kind, adventurous man dove in to help extract him from his predicament.

I hardly recognized Zeus when he was returned to me. He was breathless with a look of fear and exhaustion in his eyes. Normally a cocky, sensible horse, Zeus managed to scare himself as much as he scared me.

My saddle had aged 30 years from the thrashing of branches and half my brushing boots were lost to the cedars. But neither of us had a scratch. Apart from an overwhelming abundance of lactic acid and adrenaline filling our bodies, we were fine.

My legs wobbled as I led Zeus back to the trailer. My arms were heavy and reaching up to pat him was almost too much effort.

As I put Zeus’s halter on, I heard a quiet voice, “Would you like us to untack and cool out your horse?” I turned and saw a woman and her young daughter looking at me with concern.

I was on the verge of tears, weak from the experience and unclear if I hated Zeus or felt bad for him.

I felt ashamed. I never hand my horses off to other people to care for, least of all strangers who may know nothing about horses. But I didn’t have the wherewithal to cool him out. And despite his irrational behaviour he deserved and required attention.

I was so grateful for their help. For everyone’s help.

The following weeks, various experts examined Zeus, and all declared him fine and dandy. His reasoning for the bolt will be his secret and his alone.

My coach, Kyle Carter, was unwilling to let me give up on Zeus and it was back to the drawing board for us.

Which brings us to a year or so down the road, galloping through an open field with a broken bit and only a nylon spur strap standing between bolting and stopping. My mind was awash, and I had to fight every irrational instinct to remain calm.

I took a deep breath and said in the softest voice I could muster, “Whoooaaa. Gooood booooy. Whoooaaa.”

The labyrinth of paddocks loomed.

Zeus’s stride hadn’t altered. He was gaining on the paddocks and doing so at his own free will. I was waiting for his decision. Go or stop?

And then he started to slow, and at the first sign of a trot I jumped off.  Running along beside him, I managed to get my hand on the bridge of his nose and used the other to pull on the noseband and within a few strides he stopped.

I patted him and then was forced to stoop over resting my hands on my knees. Zeus was unfazed and stood quietly as I pulled myself together. I took a few deep breaths and then led Zeus over to the warm-up to see Kyle.

“Why’d you pull up?” Kyle asked. “If your rein breaks, tie it in a knot and keep going.” He was annoyed with me, but only because it marred Zeus’s record.

I showed him the two pieces of the bit. His irritation turned to surprise.

“Of all the horses for that to happen on. That could have been a disaster.”

That same year Zeus and I completed the Radnor Hunter International Three-Day Event CCI** (now CCI***) and the following season we ran advanced.

I was lucky to have a coach with the patience and determination to ensure Zeus and I understood each other. And because of that, the broken bit incident turned into nothing more than a good story to tell.