It takes a certain type of person to truly understand, and appreciate, the role that “chance” plays in the story of life.

This week’s guest on The Jay Duke Show, Canadian Olympian Beth Underhill, makes no bones about how lucky she was that certain things happened in her life in a certain order—certain things which created specific opportunities for her to learn, and grow, and be in the “right place at the right time.”

One of the most formative instances was meeting Olympian Torchy Millar (CAN) “nearer to the end of his competitive career than the beginning,” which gave Beth the opportunity to ride and compete much more than had she met him at any other point in time.

Another is the incredible story of finding Altair—one of the most influential horse’s of her team career. It was a chance encounter overseas.

“I was on the Canadian team in 1994 for the World Equestrian Games in The Hague, Netherlands with Monopoly. Our team was Ian Millar, Jill Henselwood and Eric Lamaze, and we were based out of Stal Hendrix,” Beth recalled. Stal Hendrix is an internationally renowned jumping horse sales and breeding operation.

“There was a lull between shows for a couple of weeks. The rest of the team went home and I decided to stay and follow Emil and Paul [Hendrix] around for a bit to learn more about that part of the industry.”

Paul took Beth to a local show and, in doing so, set the stage for her chance encounter with the stunning Dutch Warmblood gelding.

“I remember it vividly. I was sitting on a bench eating an ice cream cone, and this horse came into the ring and just knocked my socks off. I mean the ice cream cone was forgotten, it was dripping onto my hand. Paul had gone to another ring and I ran over and I literally started tugging on his sleeve like a child, saying ‘You have to come see the horse,” she laughed.

It turned out that Stal Hendrix had owned the horse and sold it; but it came back to the barn having had a few issues with the triple combination. Altair was in training and—more importantly—not for sale.

“They weren’t ready for that horse to move on because they wanted to make sure that he was confident again before they put him back on the market,” Beth explained.

“I was just fortunate that the timing was right that I was there. Paul had just met me and he took a chance on me. He loved the horse very much and he innately knew that horse’s potential. He really wanted the right rider.”

…And then he agreed to help her buy him, too.

“The truth is, the horse was too much money. I couldn’t afford him. So Paul very kindly kept a stake in the horse. I was able to put a small syndicate together, and that was how I was able to bring him home to Canada,” shared Beth.

“I’ve never before or since seen or felt a horse that grabbed me so viscerally. It was immediate. There was some connection there right from the beginning. It just seemed like all that summer various things fell into place that put that horse onto my perspective.”

Beth spent the next two years slowly developing Altair, building his confidence and fine tuning his responsiveness to her style of riding.

“I was very mindful and Paul instilled this in me when I got the horse. He said. ‘You must take your time with this horse. You can’t rush anything.'”

“There were times I’d walk to couse and scratch because I didn’t like the track or the combination was going to encourage him to climb and maybe get in trouble. I never had an issue with him with a combination, but I was also very careful at the beginning where I took him and how much pressure I put on him.

Altair made his Grand Prix debut with Beth in 1997 and quickly became a fan favorite for his proclivity to give a jubilant buck on course. The pair went on to represent Canada at the World Equestrian Games in 1998 and to log Nations’ Cup victories at Spruce Meadows in Calgary, AB, the National Horse Show in New York City, and Toronto’s Royal Horse Show. They captured the team bronze at the Pan American Games in 1999 and finished second in the $800,000 du Maurier International Grand Prix At Spruce Meadows, the world’s richest show-jumping event. Beth was offered a seven figure sum for the horse, but declined to sell.

Altair’s career was ultimately cut short by injury. Even in retirement, he continued to receive fan mail and visitors until he passed away on Sunday, March 12, 2006 at the age of 18 following a sudden illness. Altair is buried beside Beth’s house at her farm in Schomberg, ON.

Perhaps it’s true, that: “Once you make a decision, the universe conspires to make it happen.”  (Ralph Waldo Emerson)

Watch Beth’s full interview on this week’s episode of The Jay Duke Show, presented by Haygain! 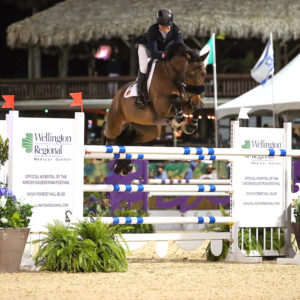