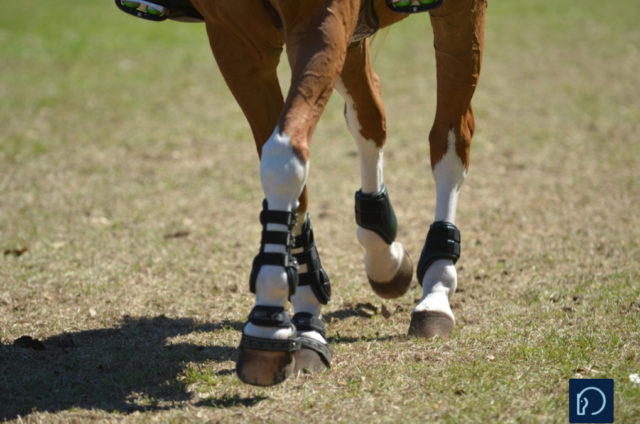 Among the more common injuries besetting equine athletes are injuries to the various tendons and ligaments of the legs.

In fact, they’re so common that some have even earned the sort of colorful, somewhat descriptive, name that has identified a lot of equine injuries for centuries: a “bowed” tendon.

If we can all agree on the old adage that an ounce of prevention is worth a pound of cure (said by none other than the American polymath and bon vivant, Benjamin Franklin), and if we agree that tendon and ligament injuries are unfortunately common, it would probably be a good idea for everyone to think about how to prevent the darn things rather than set aside a separate savings account in case you are enticed to buy the myriad devices and products that are used to treat them.

Even though, at the end of the day, tendon and ligament injuries do tend to heal pretty well, it still takes a lot of time and effort to get them back to where the horse is able to run/jump/piaffe/spin/slide or do whatever else we ask him to do.

So, in that regard, let’s talk about a few things that you can and should think about so that you can keep your good friend injury free for as long as possible.

As anyone who has ever met at least two farriers knows, there are generally only two ways to shoe and trim a horse: the right way, and the way everyone else but the farrier that you’re talking to does it.

That said, in terms of general principles, the least complicated, simplest way to shoe and trim the horse is generally the best. If your horse can go barefoot, it’s not a bad idea (and it’s easier on the budget, too). If your horse needs shoes, that’s ok, too. For most horses, less (“special” shoeing and trimming modifications) and more adherence to general shoeing principles is usually associated with more (soundness). (Read my article on some basic shoeing and trimming principles.)

It’s said that you are what you eat. However, it’s pretty hard to associate any particular tendon or ligament problem with nutrition, unless you get into some weird toxicities.

Fortunately, horses tolerate a fairly wide range of nutrient levels and do well on a variety of feeds. In general, if your horse looks good, it’s because he’s being cared for well. Oh, and exactly no supplements have been shown to be useful in preventing tendon and ligament injuries.

It’s pretty simple, really; the more weight a horse carries, the harder it is on his tendon and ligaments. In general terms, good body condition for a horse is where you can feel his ribs easily, but not see them (obviously, there’s a range).

If all you ever do is walk your horse down the trail, chances are pretty remote that he’ll even suffer from a tendon or a ligament injury. Oh, sure, horses being horses, they’ll generally find some creative way to hurt themselves—and accidents do happen—but tendon and ligament injuries are more generally seen in athletic horses—jumpers, runners, sliders, etc.—than they are in horses with a more sedentary way of life.

If you have an athletic horse, it’s mandatory that they are trained for the discipline in which they compete. What constitutes “proper” training, of course, is not at all well-defined. In fact, it would be pretty difficult to define, given that our ways of assessing the training or fitness level of a horse are pretty rudimentary.

Even so, there are a few general rules that are likely to helpful in preventing tendon and ligament injuries:

Don’t do too much, too fast. Even though horses are remarkable athletes, and even though most of them will go forward and try to do the job asked of them with a minimum of prompting (there are certainly exceptions), it’s important to build them up to the amount of training and endurance needed for their particular discipline.

Do something, regularly. If you’re training your horse, get your horse out at least three or four days a week.

Don’t overtrain. Strong tissues come from cycles of training and rest/repair. Rest allows for tissues to repair themselves. Overtraining—asking the horse to repeat the same movements, day after day—runs the risk of repetitive stress injuries, which is how most tendon and ligaments occur. Think of breaking a paper clip—you can bend it a couple of times, and it will be ok, but bend it too often and it will snap.

Cross train. If you’re preparing your horse for some athletic endeavor, don’t make your horse do the same thing, day after day. For one, it will make him crazy and he’ll get tired of it (and probably get tired of you, too).

That said, if you are cross-training, it’s probably a good idea to avoid working your horse beyond his accustomed level of activity. So, for example, don’t one day decide to see if your horse can do a 50 mile endurance race if all that he’s been doing in the past couple of years is hacking around on the flat.

Walk your horse a lot

I think that the most underappreciated gait of the horse is the walk. The benefits of walking are innumerable. Walking is fun, horses like it, and it’s a great way to sightsee. You can also get a lot of training work done at the walk.

Walking has some big benefits insofar as preventing tendon and ligament injuries, as well. So, for example, once a horse is warmed up at the walk prior to working at faster gaits, it takes a lot more force to tear tendons and ligaments.

Even if you don’t ride your horse over fences, run them in circles, or try to keep a steer from going back to his buddies, tendon and ligament injuries can occur in a horse’s own environment.

Equids evolved on the flat ground of plains, steppes, and veldts—they left climbing mountains to goats, sheep, and such. So, when it comes to preventing tendon and ligament injuries, as much as possible, it’s probably a good idea for them to spend most of their time on flatter ground. It is possible (though less common) for a horse to strain a tendon or ligament without any prompting from a rider, so the gentler and flatter the footing, the better.

Of course, even if horses are in a stall, they can do things to hurt their legs by getting cast, or by kicking.

ASIDE: I’ve often been asked if I wish that horses could be kept in padded stalls to prevent injury. My response has always been, “No, they’d just eat the padding and colic.” It’s always something.

The link between footing and tendon and ligament injuries is a complicated subject. It’s reasonable to say that horses shouldn’t be worked for a long time at speed in deep, soft ground, but things aren’t always that simple. Here’s a good article on the American Association of Equine Practitioners website that I hope you’ll find helpful.

Conformation is a bit of a thorny subject. It’s easy to assume that a horse with “good” legs will have fewer injuries than one with corkscrews of legs, but there have been plenty of good performance horses with bad conformation. Still, if you’re going to buy a horse, there’s nothing wrong with trying to pick one with relatively good conformation.

If your horse does have any of these problems, for goodness sake, don’t tell him. He’ll just go on trying to do the best he can anyway and you wouldn’t want to make him feel bad.

If your horse already has a problem, be extra careful

If a horse hurts in one spot, he will commonly try to shift weight away from that spot to other spots (say, from one front leg to the other one). Even if the horses isn’t obviously lame, overloading one side for the other puts the overloaded side at risk for injury.

If your horse has some sort of soreness or lameness issue, don’t just ride through it and hope it will go away. Treat it appropriately (consulting with your veterinarian, as needed) and you’ll be protecting the tendons and ligaments, too.

Make sure you’re not the problem

You can’t guarantee that by doing the right things your horse will never have a tendon or ligament problem, but if you don’t do the right things, you can increase the odds that he will.