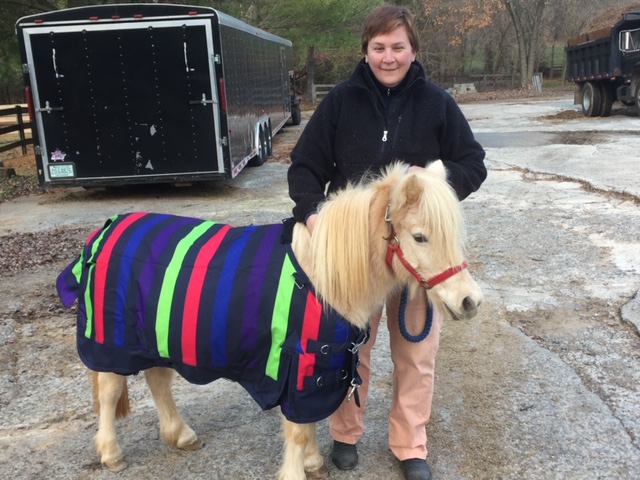 “Domino” the piebald Breyer horse perches on a shelf in Sigrid Haines’s law office and watches her study legal files.

Haines is a partner at Whiteford Taylor Preston, LLP in Rockville, Maryland. She got Domino for Christmas when she was four years old, and he very much reminds her of the first rescue horse she adopted as an adult.

Haines has loved horses for as long as she can remember. Though she’d say her career as an amateur rider has been touch and go, she’ll also tell you she simply loves being with the animals more than the thrill of riding.

“Some days, when life is stressful, I go to the barn just to hang out,” Haines says. “If the girls are in their stalls, I talk to them and groom them, and I am known for being a bit heavy-handed with healthy treats. We discuss politics and the news or barn gossip, and they never talk back.”

Her journey towards horse ownership began more than 30 years ago when she reached out to the local Days End Farm Horse Rescue (DEFHR) in Woodbine, Maryland, shortly after the nonprofit was created. Since then, Haines has likely logged as many hours visiting her adopted horses at her boarding barn as she has representing clients and studying the latest regulations, bylaws, and policies.

“I enjoy watching their antics,” she says. “Every one of them is my favorite.  After eight years, I am still learning about how to care for them and their various conditions, so that keeps my brain occupied.”

Beyond their basic, and sometimes advanced, health needs, she plays games with her horses. They train groundwork, have spa days, and generally just enjoy each other’s company. The horses trust her which, for many rescue cases with spotty backgrounds, can be an uphill battle.

“Adoption of a horse as a companion-only is a new approach to what horse ownership can look like,” says DEFHR’s CEO, Erin Clemm Ochoa. “Horses can be enjoyed for more than riding and many people are seeing the benefits.”

Haines took lessons as a child but never owned her own horse. Instead she drew horses, hung out around horses, talked about horses, read about horses, and pretended to be a horse. She says she memorized Black Beauty from start to finish, and she ran hurdles in high school because she wanted to jump like horses do.

Her Breyer collection grew as she did, but when it came down to buying a real horse, Haines’ parents had to pull the plug on her lessons. But that didn’t stop her from dedicating all her free time to horses.

When she wasn’t around them, she still talked about them. In 1989, early in her career as a young legal associate, she was chatting with one of her colleagues who told her about DEFHR and their mission to ensure quality care and treatment of horses through intervention, education, and outreach.

That’s when she found Harpo. “He was a large black-and-white pony, just like Domino,” she says. “He was right here in Maryland, having been retired from the Maryland Therapeutic Riding Center.”

She sent DEFHR an email. “They promptly got back to me with a detailed response about how Harpo was very smart and would love groundwork,” she says. “They also explained about his arthritis, so I felt I had full disclosure.”

She had to meet him. Within five minutes of introduction, Haines started Googling for nearby boarding barns. After going through all the necessary steps with DEFHR to prepare for horse ownership, she signed Harpo’s adoption papers on her birthday.

He always had to be in the conversation

At first, it wasn’t a fairytale. Harpo turned his back on her every day for the first week. He shined a bright spotlight on all the things Haines didn’t know about owning a real horse. So, she hired a trainer to help and enlisted the barn manager’s horse care expertise where she boarded him.

By educating herself, with steady training, thorough grooming, and good old-fashioned affection, she earned his trust and his disposition eventually warmed. But he never stopped showing Haines how and where to grow as a horsewoman.

“Harpo was forgiving but unafraid to correct me when I goofed up,” she says. She trained him to walk under sticks and over tarps. She taught him that only blue buckets contained food. He learned to unroll a carpet. He came when she called. He could even pick out specific horses from a collection of three photos.

“If I got a phone call while at the barn, he always had to be in the conversation and would fuss if I walked away to take the call,” Haines says. “At least one federal prosecutor wondered why there was some snuffling during the discussion of felony charges against my client.”

She frequently sent Harpo’s photos to Maryland Therapeutic Riding Center to keep his fans happy. In one correspondence, they replied with photos of another retiree up for adoption. It didn’t take long before May, a grey Andalusian/Morgan joined Harpo at Haines’ barn.

“She had a joyous reunion with Harpo,” Haines says, remembering the moment they recognized each other.

New friends to play with

When Harpo’s arthritis became unmanageable, Haines and May lost their dear friend of five years. “I missed him so much that I decided to call DEFHR to see if I could find a new friend to play with,” Haines says. “Sara [Strauss], the DEFHR head trainer, introduced me to Santana, a black horse with some health issues who was in the DEFHR Guardian program.”

She also met Nickering “Nikki” Nickels, a Shetland pony. “After some debate,” the lawyer says, “I decided to take them both.”

She remembers Nikki didn’t make a peep for months. She brought her home first while the caring hands at DEFHR helped Santana through some health issues.

“She is now the loudest voice at my barn,” Haines says of the tiny pony. “She’s learned to roll a ball and unroll a carpet, and she loves to ‘count’ so much that she doesn’t want to stop. She is completely naughty and utterly adorable.”

When Santana joined Nikki, he easily learned the groundwork games and enjoyed showing off his trot. Sadly, Haines lost Santana to laminitis after only a year. So, she returned to DEFHR and met Yahaira’s Yesterday, a grullo Quarter Horse with arthritic hocks. She renamed her Mocha.

Mocha had more trouble adjusting than any of the others. She feared almost everything. But Haines did what she does best. She loved Mocha, played with her, cared for her, and ultimately earned her trust.

“She got a bad cut on her leg that I had to treat daily for a month,” Haines recalls. “She realized I was there to help her. We really bonded after that. All the horses want to be her friend. She doesn’t see much point in groundwork, but she is excellent at posing. If I had to share tea with a friend, it would be with Mocha.”

With her three girls, Haines was content. Or so she thought. Soon enough, she’d adopted two more. “I saw Gypsy on DEFHR’s website,” she says. “She was feral in West Virginia for ten years! If I could have three horses, why not four?”

“I’d been eyeing Zaylee Zoe, a roan Hackney-type pony, who had been on DEFHR’s website for months.” At only 3 1/2 years old, Haines pondered the decision carefully. She had only ever owned older horses.

“When I met her, I could see why she was so hard to place,” she admits. “Standing still was not her forte. She wanted nothing to do with saddles.”

But she neighed for Haines, and only Haines, every time she visited. So, she took the chance and is glad she did. “She only stands still when I start to groom her, which makes her stand stock-still, so she obviously loves it,” she laughs. “She loves to play ‘come to me’ for treats, she hands me objects that I ‘drop,’ and will jump over obstacles on command.”

Besides spending free time with her own rescued horses, she also gives back to the nonprofit that introduced her to ownership by serving on DEFHR’s board and providing them with pro bono legal services.

“Supporters like Sigrid are anchors for the organization,” says Caroline Robertson, Development Director for DEFHR. “She not only supports our mission in time, money, and heart, but she also isn’t afraid to broadcast her efforts and commitment to encourage others to follow her example. Whether she’s an adopter, volunteer, donor, board member, or professional consultant, she always steps up and delivers to ensure that DEFHR continues to move forward and make a difference.”

“I support DEFHR, because the pictures of where my four girls came from still break my heart,” Haines says. “DEFHR provides terrific care to these creatures. They are now happy and thriving, and I feel delighted to be able to contribute to that. I get back more than I put in.”

Over the past three decades, Days End Farm Horse Rescue in Woodbine, Maryland, has been renowned for working to not only prevent equine abuse and neglect, but also to educate the public about equine welfare and help their staff, volunteers, and members of the public become better horsemen and women. Learn more about DEFHR‘s adoptable horses as well as their numerous education and volunteer opportunities. Visit https://www.defhr.org or follow them on Facebook and Instagram.