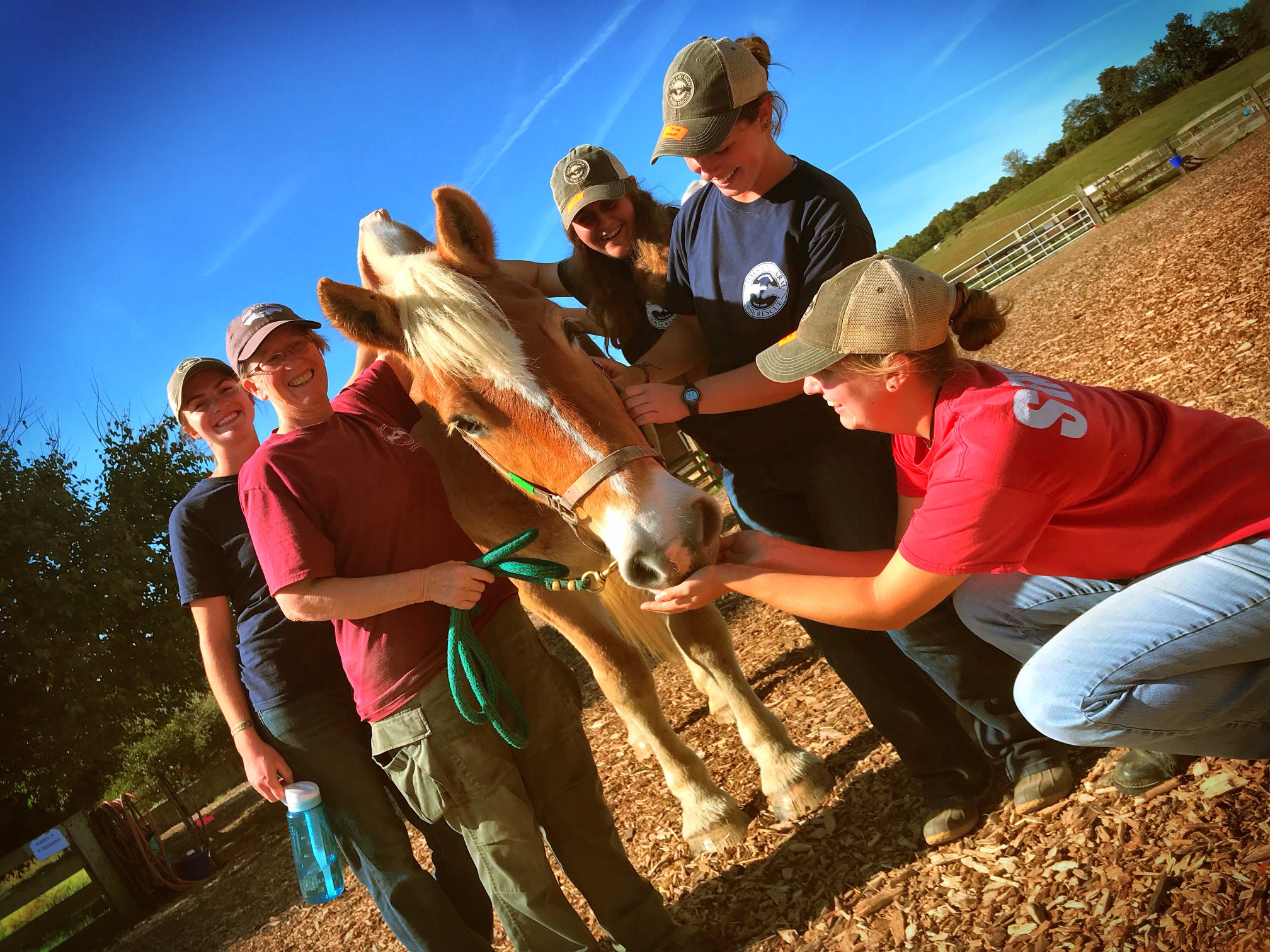 It’s not often that a horse has had a million hands pet him throughout his lifetime, but for Officer Barney, a retired mounted police horse, that number is no exaggeration.

For 12 years, the 17-hand Belgian gelding was the lead horse for the Baltimore Mounted Police Unit (the oldest mounted police force* in the United States), but now at age 24, he’s enjoying a quieter life performing a different type of public service.

From Amish Country to the Big City

Barney’s tale begins on the outskirts of Lancaster, Pennsylvania, where he worked as the lead horse for a six-horse hitch on an Amish farm. Janine Gilley, a now-retired Baltimore City Police Officer, was hunting for a strong, steady horse to join the ranks of the city’s mounted unit and visited the farm to try out their horses. The horse she’d traveled to see didn’t pan out for the intended job, but something about Barney caught her eye—he seemed like just the type who’d fit in with her unit. She made the farmer an offer on his prized lead horse, and soon enough Barney was en-route to his new home in the city.

Barney had little riding experience, but it didn’t take long for him to master his new duties in Baltimore. At six years old, Barney was a quick learner and epitomized all the special qualities needed for the force: bravery, patience, and most importantly, a kind disposition.

Though Gilley was one of his main riders, each of the mounted police horses are typically ridden by most of the officers in the unit, and Barney quickly became a favorite.

“He knew his job,” recalls Sergeant Russell Robar, the unit’s sergeant. “He was a boss, and everyone followed Barney. We love horses like that.”

Since 1888, the Baltimore Mounted Police Unit has been a frequent presence on the streets of the city, patrolling their community and helping control crowds, when needed. Community outreach is also an important part of their ongoing duties, and the unit often performs demonstrations and appears at functions such as HorseLand at the Maryland State Fair. They also host “Show and Tell” sessions where school groups can meet the horses, tour the stables, and learn more about the unit as well as general horse care. These sessions are intended to teach local children about horses and help build a positive relationship with the police department.

“Our horses have to be good around people or they won’t last with us, because we do so many show-and-tells,” explains Sergeant Robar. “We did 170 events last year. They have to go from walking the streets of Baltimore and maybe breaking up some fights, to visiting an elementary school the next day and having the kids underneath their feet.”

A Change of Pace

The unit’s horses are important partners for the officers, and after serving their time in the city, approved retirement homes are carefully chosen.

“One of my most important jobs is finding the perfect fit for the horses afterward where they will enjoy their retirement for the rest of their lives,” says Sergeant Robar. “I consider that one of my highest, highest priorities. It’s so important to me.”

After his 12-year tenure on the force, in 2015, it was finally time for Barney to be retired. Though he was 19 years old, he still had plenty of life left in him, and it was decided he would excel in a situation with light work, rather than become a “pasture pet.” The department posted on their social media pages, announcing the beloved gelding’s retirement and the search for a perfect home.

DeEtte Hillman, Days End Farm Horse Rescue’s Equine Programs Director, saw the announcement no less than five minutes after it had been posted and immediately picked up the phone to find out more about Barney.

“I spent an hour and a half on the phone with the lead officer talking about our education program, our public outreach program, and the equine ambassadors we have that enable us to reach people and connect them with horses,” Hillman says.

DEFHR, a well-known nonprofit with a history of rescuing and rehabilitating abused and neglected horses, was looking to expand their equine ambassador program and Barney seemed like the perfect fit.

“It was mutually decided that Barney needed that type of life,” she added.

Soon after, the DEFHR staff paid a visit to the unit’s stable in downtown Baltimore to meet Barney. After DEFHR’s head trainer Sara Strauss evaluated him for his new role, he passed with flying colors and arrangements were made for his homecoming to Days End Farm.

The entire mounted police department traveled with Barney to deliver him to his new home at DEFHR, less than an hour away in Woodbine, Maryland. The facility was hosting one of their annual summer camps that week, and the children and staff threw a party in his honor, waving hand-painted signs to welcome him to the next chapter of his life.

For the past five years, Barney has embraced his role as the lead equine ambassador for DEFHR. Much like his community outreach duties on the force, whenever he attends an event he provides an opportunity for people to engage with a horse. His quiet demeanor often calms their fears, giving them confidence.

“He might be the first horse someone ever touches—they remember how he makes them feel,” says Hillman.

On an average day, Barney might participate in lessons for animal control officers and police officers, as DEFHR staff teaches them how to safely catch and handle a horse, assess body condition scores, and navigate through situations they might encounter on the job. DEFHR rarely takes in retirement horses, but having the chance to use an ex-police horse to teach law enforcement officials is a unique opportunity for the organization—and a full-circle moment for Barney to be united with these officers again.

The facility also hosts school field trips, youth camps, and other types of educational opportunities. During these events, Barney is often called into duty to spend a few hours with hordes of excited children grooming him, picking out his hooves, and learning all about how to care for horses. His saintly disposition makes him the perfect teacher for young horse enthusiasts.

Because he also represents DEFHR at public outings, meet and greets, fundraising events, and area parades, the gelding has become a local favorite.

“He doesn’t know this, but he is literally is on duty full-time, because everyone who drives past his field looks for Barney,” says Hillman. “We receive so many messages and calls from folks who tell us how they see him out there and adore him.”

What makes Barney’s role as a trusty leader of DEFHR’s ambassador program all the more special is knowing his amazing background.

“I had the privilege of talking to several of his past partners,” Hillman recalls. “The stories they tell of his steadfastness, even when bombs would go off in the city or there were riots and gunfire, were incredible. Barney understood his role and duty—he supported not only the officers, but the other horses, too.”

“Barney is a horse we’ll never forget,” adds Sergeant Robar. “He stands out among the greats. He belongs on the Mount Rushmore of our unit horses.”

Whether Barney is showcasing his strength and confidence during a local parade or standing quietly while being groomed by a small child, he always knows his job.

“He has an ability to comprehend and understand that he has a purpose in life, and he owns it,” says Hillman. “It’s a quality about him that is special and rare.”

The votes are in…

Since Barney became part of the DEFHR family, he’s also been joined by two other Belgians who retired from the force, including Sergeant Robar’s long-time (and equally famous) partner, Big D.

“These horses get retired from the heavy work, but they still have a purpose and value and can give back,” explains Hillman. “I love the relationship and support that we can provide these horses and the mounted police.”

Knowing the unit’s hard-working equine partners have a lifelong home is comforting for Sergeant Robar.

“When Days End says they’ll take them, I know I don’t even have to worry,” he says.

And for Barney, the accolades keep coming. This past spring, as sporting events came to a standstill, The Equiery, a Maryland-based publication, hosted a virtual competition for their community based on the NCAA March Madness tournament. Equestrian fans were invited to vote for their favorite horse from among a line-up of 64 famous horses throughout the month-long tournament.

After the final results were tallied, Barney was named the champion—with more than 1,000 people voting, he won by a whopping 84 percent. Just another day in the life of this amazing ex-police horse.

*On June 15, 2020, Baltimore City Council members voted to cut approximating $22 million from the police department’s $550 million budget and passed a motion to disband the department’s mounted and marine units.