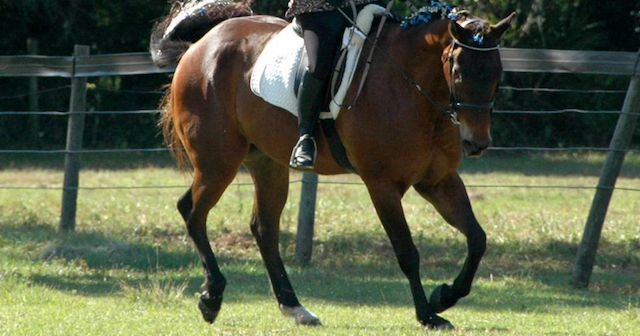 “Lots of bugs this summer! That’s probably why this horse has glassy eyes,” was the diagnosis a local vet gave when I had a bony three-year-old inspected for sale.

I happily believed him, as I’d already fallen in love with the dull-coated Quarter Horse who was routinely pushed from the communal feeding trough by stronger horses.

My husband bought me this young horse, “branded” with a large scar on his right flank from a barbed wire fence, and I began training him for low-level horse trials. My horse-loving daughter was memorizing the lyrics to Cats songs, so we named him for one of our favorite characters, Magical Mister Mistoffelees. “Magic” for short.

Under our care, he gained a couple hundred pounds, and his coat began to gleam. Some of our best memories from the late 1990s involved packing Katie’s horse and Magic for weekend horse trials in Georgia or South Carolina, where Katie would ride Training or Preliminary level and I would happily stick with Beginner Novice.

The vet’s diagnosis, however, wasn’t accurate.

Magic had equine recurrent uveitis, an inflammation that causes pain and typically affects only one eye, except in the case of Appaloosas. Some, but not all, horses eventually go blind from the condition.

We carefully treated Magic with ointment prescribed for his bouts of inflammation. In his fifth year, my new vet peered into his cloudy blue right eye and told me it had gone blind. I scheduled an appointment at the University of Georgia’s vet school, where I was told I should put him down if the other eye went blind.

Meanwhile, we continued to ride the steep trails behind our home and at the Georgia Olympic Horse Park, and I began to use voice and hand signals to correspond with terrain. “Up!” I’d say with a rising voice as we climbed hills, and “Down!” with a low-pitched voice when descending. I also continued to ride Magic in local and sanctioned dressage shows.

One fall evening during Magic’s sixth year, Katie and I were galloping our horses up a hill when my gentle horse bucked me over his head. Something was wrong.

I picked myself up and caught up with him. I swung a hand towards his “good” eye, but he did not react. Magic had gone totally blind.

Over the next week, I watched in awe as my daughter’s horse stood guard over Magic. Sometimes they would run around the pasture, and Katie’s horse would actually take the outer perimeter, kicking at Magic if he came too near the fence.

After a week, I carted my saddle and bridle out to the pasture, tacked him up, and said, “OK. Let’s see what we can do.”

Not long after, we were back on the steep hills behind our home, and I began to practice training level and first level dressage tests with him again, entering local shows. People didn’t know Magic was blind until I had his eyes removed by my local vet, because it became clear to me that they still caused him pain.

Then I entered a sanctioned show sponsored by the American Horse Show Association (now the US Equestrian Federation). I rode two tests before I was disqualified because my horse was blind, and “dangerous.” I saw horses that were truly dangerous in the warm-up arena; Magic was always calm and quiet.

Back home, I started a petition and got nearly 200 signatures to change the rulebook, clarifying that blind horses should be allowed to compete. It is now a part of DR 119, “Participation in Dressage Competitions” of the USEF Rulebook: “Horses with complete loss of sight in both eyes may only participate in classes in which they are shown individually.”

As for Magic, he is now a shiny, well-loved 24-year-old horse, comfortably at the Sarasota-Manatee Association for Riding Therapy (SMART), where, through his example since 2007, he has taught children with disabilities and military veterans the value of a meaningful life, no matter what challenges they face. In 2010 he was chosen as NARHA’s Region 5 Horse of the Year.

A children’s book I wrote about him, Magic: One SMART Horse, has delighted hundreds of schoolchildren and introduced them to the joys of reading through SMART’s literacy program. His worth has been the story of numerous newspaper articles.

All this, from a tossed aside three-year-old horse destined for sale as dog meat.

Jody Lynn McBrien is a Professor at the University of South Florida and a lifelong equestrian. It has been her honor to have Magic in her life. 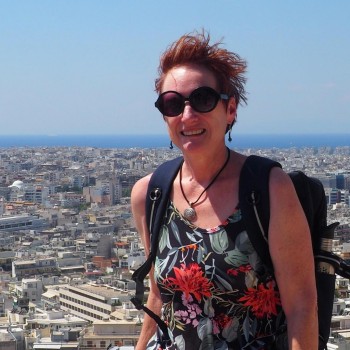