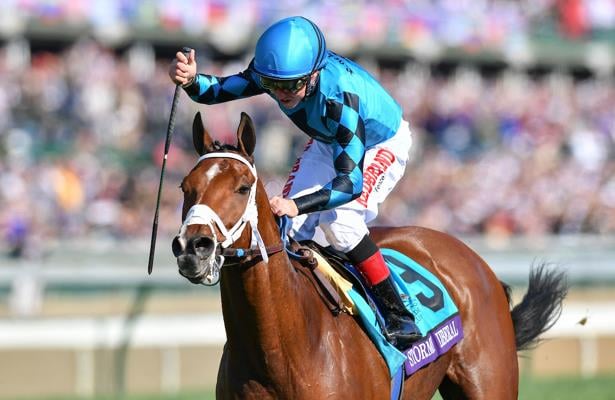 A bad year for horseracing may just be getting worse…or better, if racing fans have any influence.

In a statement early Tuesday, trainer Peter Miller, who saddled seven-year-old gelding Stormy Liberal (by Stormy Atlantic out of Vassar by Royal Academy) to consecutive Breeders’ Cup Turf Sprint (2017–18) wins and the 2018 Eclipse Award as Champion Turf Male, announced that ownership would be moving the horse to Ocala, Florida to continue racing under David Scanlon, managing owner of David Scanlon Training and Sales.

Miller, the widely respected trainer of stablemate and also consecutive Breeders’ Cup (dirt) Sprint winner (2017–18) and Eclipse Champion (2017–18) Roy H, announced in his statement he and his veterinarian opposed continuing to race Stormy Liberal because of undisclosed medical considerations:

“I am sorry to announce that Stormy Liberal will be leaving our barn to continue racing under another trainer. Both my veterinarian and I believe the horse should be retired. In fact, we had already started inquiring for him to retire to Old Friends so he could live out his days in comfort and good care, and allow visitors to enjoy him up close.

It is very rare to claim a horse for 40k, win two Breeders’ Cup Races and earn the prestigious Eclipse Award. It is my professional opinion that he has given and accomplished enough. While the owners certainly have every right to make these choices, and I respect that, I would like the record to show that I was not in favor of this decision.

Stormy has been very special to our team, and to me. We will miss him and hope for the best.”

“Peter Miller called me yesterday afternoon about retiring Stormy Liberal to Old Friends. I was overjoyed…imagine having a two-time Breeders’ Cup winner for all of his fans to visit. I Commend Peter and let everyone know that there will always be a home for this magnificent Champion at Old Friends.”

The announcement that ownership may continue to race Stormy Liberal under Scanlon provoked outrage on websites throughout the racing community and revealed apparent discord within the ownership.

Part-owner Rockingham Ranch appeared to side with Miller in announcing it was relinquishing its share of ownership in the horse to Bernsen. The decision was announced in a brief statement:

“Our partner Mr. Bernsen had a difference of opinion with Mr. Miller and has chosen to buy Rockingham Ranch out of Stormy Liberal and send him to the care of David Scanlon in Ocala, FL where he will be thoroughly evaluated.”

There has not been further comment on what constitutes “thoroughly evaluated,” nor did Miller or his unnamed veterinarian cite their concerns.

Champion Stormy Liberal has had a stormy year on the track, his most impressive finish as 3rd in the Al Quoz Sprint on Dubai World Cup Day March 30 at Meydan. He has no wins in this, his fifth year racing, perhaps prompting concerns for his racing soundness.