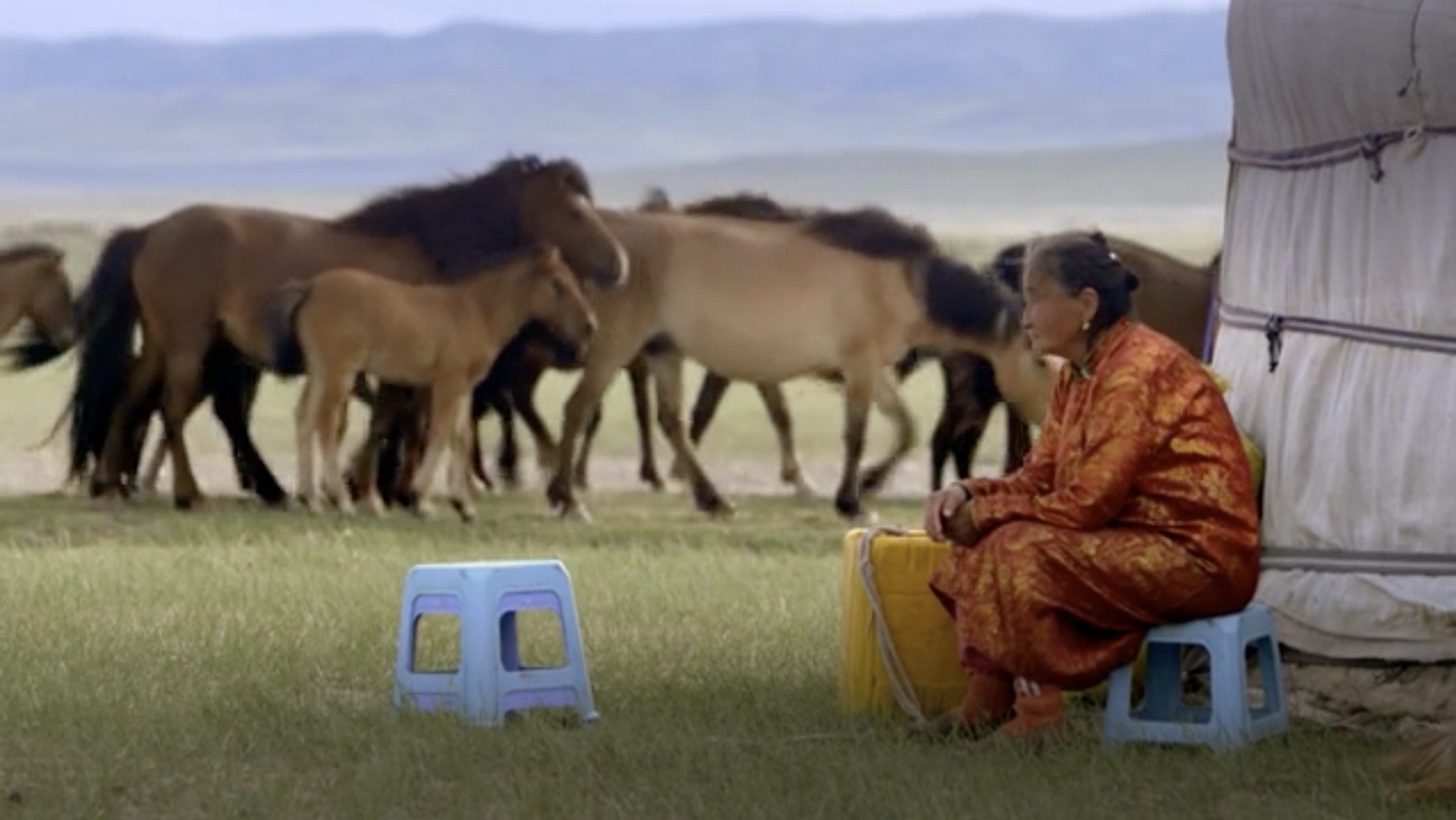 One of the most striking scenes in Ceolchuairt Mongolia doesn’t include a fiddle.

Instead, the camera focuses on a little sorrel horse, as wild and fierce as the Mongolian winter. It bucks and strains as a herder rides him for the first time. The horseman sits each leap stoically with more chill than many of us changing our diagonals on a school horse.

Irish Fiddle player, Daire Bracken, watches these Mongolian herders at work, and his guide turns to him and says, “No one has ever ridden this horse before, except the wind.”

That wind on the backs of hardy horses is perhaps the spirit of traditional Mongolian music. From throat singing to the horsehead fiddle, the landscape and the horse are always central to the sound.

I remember hearing both—hoofbeats and grass blowing in the breeze—the first time I listened to a horsehead fiddle. I was 14, and the sound rang through a Denver park thousands of miles from the steppe both fiddle and player called home. The man who had taught me the steps of my first international folk dances was from Mongolia, and this fiddle player played for his dancers to celebrate a significant anniversary.

Like the fiddler in Ceolchuairt Mongolia, I, too, was captivated by this combination of horse and music. I loved the strange, melodic, twang of the strings. My imagination ran wild at the intricately carved horse head that seems to be observing its player with the same silent judgment my lesson horse gives me when I fail to follow our trainer’s instructions.

Unlike Bracken, however, I am not a world-renowned Irish violinist, with the chops to keep up with musicians around the world.

Ceolchuairt Mongolia is one part of a film series that sends Irish musicians to different parts of the world to learn about different types of music, share their own, and have the most eclectic jam sessions imaginable. (Ceolchuairt translates to “music tour” in gaelic.) A large portion of the film is in Gaelic, but bíodh eagla ort (fear not), there are subtitles.

Bracken travels all over Mongolia in this short film. He jams out on his violin on the streets of Ulaanbaatar and then later with an urban band that has taken in the old sound. He plays with a singer from Inner Mongolia, who laments the fences that were put up by the Chinese and drastically changed the way of life. He heads into the countryside and tries his hand at throat singing and even serenades a family in their ger.

The film often hints at the comparisons between Ireland and Mongolia. Both were places colonized and marginalized by outside forces, yet somehow maintained their deep sense of self. It is also suggested that both countries are facing a similar social and economic upheaval from a mostly agrarian society to one that is more urban.

At the end of the Ceolchuairt Mongolia, Bracken talks about how “progress” could destroy the Mongolian nomadic way of life and the music that goes along with it. As a blanket statement, undescribed, the word “progress” felt pedantic. His case would have been stronger had he brought up some of the other issues driving Mongolians away from a life among the horses—the unprecedented mining boom, pasture degradation due to overgrazing, and extreme drought and cold brought about by a changing climate.

Still, this film was a lovely vignette about two worlds colliding and finding common ground in landscape and music. A horsehair fiddle player explains to Bracken that the best horsehair for fiddle strings comes from the best horses. The stronger and braver the horse, the stronger and braver the sound. It’s a pleasure to hear it, even if it’s just through my speakers.

Give the gift of horse films this year with three, six, nine and 12 month subscriptions to Equus Film Channel, available exclusively in the Horse Network Shop!

Gretchen Lida is an essayist and an equestrian. Her work has appeared in the Washington Post, the Rumpus, the Los Angeles Review of Books, and many other publications. She is also a contributing writer to Book Riot, Horse Network, and the Washington Independent Review of books. Gretchen is working on her first book. She lives in Chicago and is still a Colorado native.