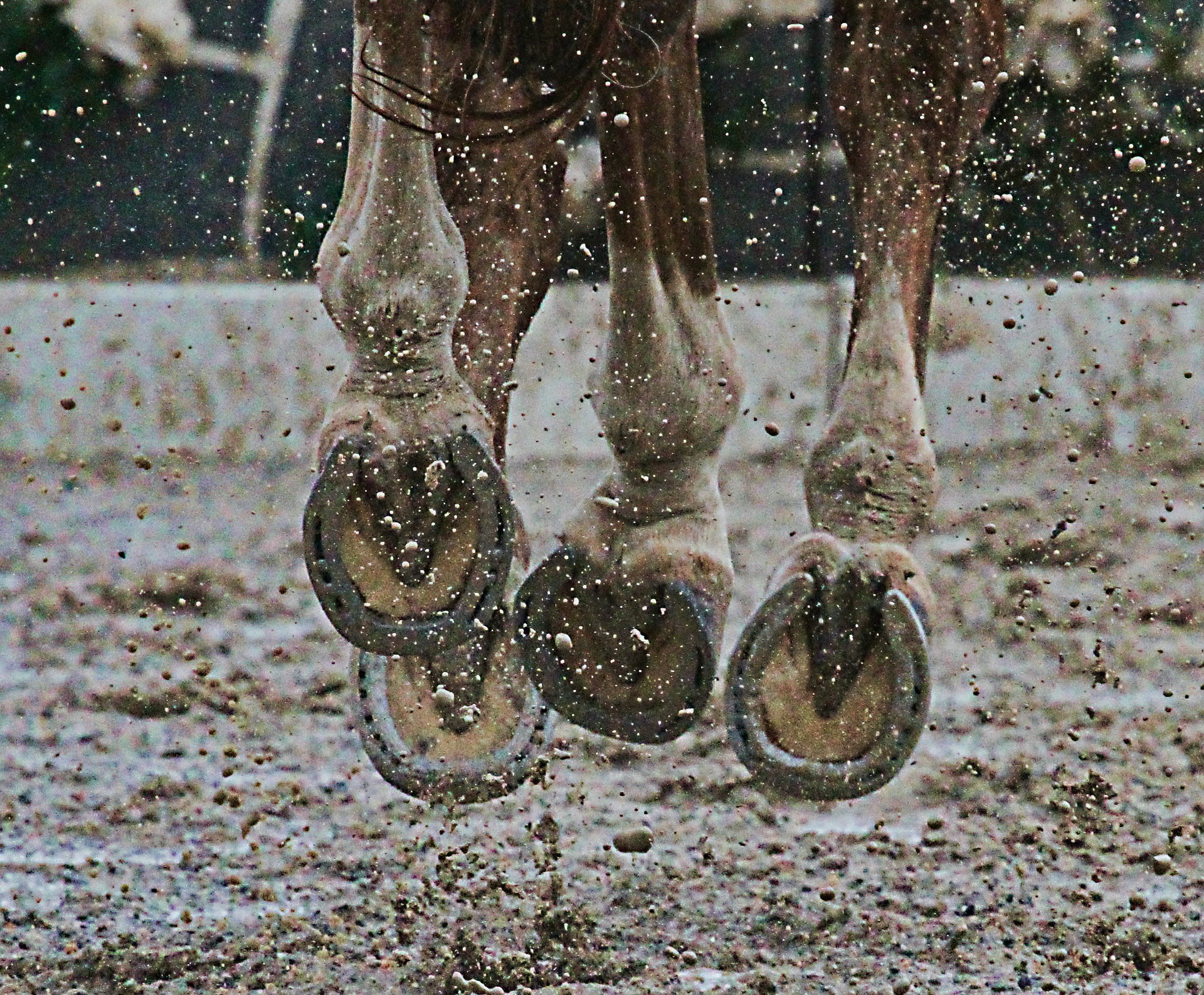 There’s a problem that crops up pretty regularly when it’s wet outside.

I hope that you horse hasn’t had it. It’s called “scratches.” Or mud fever. Or greasy heel. Or dew poisoning. Or “grapes.”

They’re colorful names for infection and inflammation of the skin of the horse’s pastern region. Inflammation of anything is called an “-itis,” and the Greek prefix for skin is “derma.” Hence, the less colloquial (and less colorful), but somewhat more descriptive, name: pastern dermatitis.

But the fact that there are many names for this condition sort of obscures the fact that there can be any one—or more—of many underlying causes. So, if your horse is unfortunate enough to get this annoying condition, it’s important that you take aggressive and immediate action.

Skin is the largest organ in the horse’s body. I think it’s a very underrated and underappreciated organ. So did the late, great, Allen Sherman, and he even wrote a song about it.

There’s nothing about the skin of the pastern that’s fundamentally different from the skin of any other part of the horse. The biggest difference, I suppose, is that the hair in the pastern tends to be longer than the hair in most other parts of the horse’s body. But that’s also a big part of the problem. Long hair tends to hold moisture, as anyone who has dried their hair through a variety of different hairstyles over the years knows.

The other thing that separates the skin of the pastern from other portions of the horse’s skin is that the pastern is low to the ground. As such, it’s constantly getting dragged through the dirt, both literally and figuratively. But it’s not just dirt (wet dirt = mud = “mud fever”), it’s also manure, urine, grass (hence: dew poisoning), chemicals, or direct trauma (from things like overreaching with another hoof, or rocks, or grass stubble). They’re all down there, ready to scrape up your horse’s pastern (hence: scratches) and set up what can be a rather nasty problem.

Anyway, when the skin of the horse’s pastern gets scraped/wet/damaged, etc., it reacts just like the skin on any other part of the horse’s body. It gets red, it gets swollen, it gets crusts and goo (exudate, if you must) on it; the skin of the pastern gets rather nasty-looking. If it doesn’t get treated—if the infection becomes chronic—chronic changes start to happen. The skin gets thicker. Red, angry-looking granulation tissue can form. The skin can start to scale, and crust. Fairly quickly, the skin can start to scar.

But even though most “scratches” cases look a lot alike, in fact, underlying the problem can be any one of a number of causes. It shouldn’t be any real surprise that many infections have both bacteria and fungi involved, I mean, if you culture your horse’s stall, or his environment, you’re always going to find those; it’s a smorgasbord of infectious agents down there. Fungi and bacteria can live on your horse’s skin with no problem—it’s when they get in the skin that the issues start.

In some horses, especially the draft breed, skin parasites can be a big problem. So, you’ll occasionally see one of these big guys with infections caused by mites (Chorioptes equi, for example), or by infections from parasites that live in dead or decomposing material (the agent is Pelodera strongyloides). In fact, draft breeds seem rather prone to developing skin infections of the pastern in general. Nobody is entirely sure why, although the big feathers that they typically carry on their lower legs certainly help keep things nice and wet. Some folks even surmise that there may be a genetic component to draft horse pastern dermatitis.

Of course, there are also lots of other, non-infectious, agents that can cause the pastern to flare up. These things can result in a horse that looks very much like he’s got a skin infection, when he really doesn’t. So, for example, if there’s chemical irritant that gets on the skin (tea tree oil is one that I’ve seen), or if your horse is allergic to something (neoprene is one that that I’ve seen), or if he’s sensitive to the sun (I’ve seen that a few times, usually because of something that the horse has eaten), or if there’s been some trauma (I’ve seen lots of those), or if there’s been some sort of weird immune reaction (only seen a couple of those), you’re horse can look very much like a horse that has scratches.

Of course, if you treat him like a horse that has scratches, and he doesn’t have scratches, he’s not going to get better. Which is a good reason why, if you think that your horse has scratches, you should think about calling your veterinarian out to take a look.

When confronted with a case of scratches, your veterinarian should be set up to do any number of tests that may be needed to get to the bottom of your horse’s problem. He or she might want to things like skin scrapings (to look for mites), or cultures (to try to see if the cause of the infection can be determined), or biopsies (especially in cases that have been going on for a while, and aren’t responding) to try to figure things out, and especially if you’ve been trying to treat things unsuccessfully for a bit.

From your end, it would help if you could provide your veterinarian with a good clinical history, including information about what you’re feeding, your horse’s daily schedule, vaccination and disease history, and that sort of thing.

Still, even though there are some weird causes of horses developing chronic pastern skin problems, most of them respond pretty well to some pretty basic management strategies.

Mostly, you want to keep the area clean and dry, which, admittedly, can be a bit of a trick in wet pastures. Curiously, it also seems to be a bit of a problem in dry southern California, and especially when horses are put away wet into stalls bedded in bug-laden pine shavings. Even so, if you can cut the hair around your horse’s pasterns, keep the pasterns relatively clean, and at least dry them off once in a while (or always, before you put him back in his stall), you’ll go a long way to preventing a scratches problem. Spreading a petroleum based ointment on the skin can help with drying and cracking, too.

“What about medications to put on the legs?” you say. I’ve seen an almost unbelievable number of concoctions smeared on the horse’s legs to treat scratches. Some—such as antibiotic and/or anti-inflammatory ointments—are not very creative, even if they are effective. Others—such as sauerkraut juice—are pretty darn creative, and even have a reasonable basis to think that they’re effective (in the case of sauerkraut juice, it would most likely be the acidity of the juice itself).

While there about a million different nostrums you can put on your horse’s skin, in more serious cases, you’ll also need to put something in your horse; systemic antibiotics may be needed. Like I said, scratches can get complicated, and it’s not a bad idea to call your veterinarian if you don’t feel good about what you’re seeing on your horse’s legs.

Perhaps you’ve heard that an ounce of prevention is worth a pound of cure? It was none other than Ben Franklin who came up with that time-worn phrase. And, when it comes to scratches, it’s also absolutely true. Scratches (or whatever you want to call it) can be a really serious problem in some horses, and it can be a nightmare to clean up. Even if you can clean it up, scratches can result in scarring in the lower limbs. So do take some care to keep your horse’s lower limbs dry and clean. And, if you see a problem, get on it early, before it makes permanent changes in your horse’s skin.

I really do want your horse to have a nice winter, you see, and keeping his legs clean of infections will make both of you much happier.