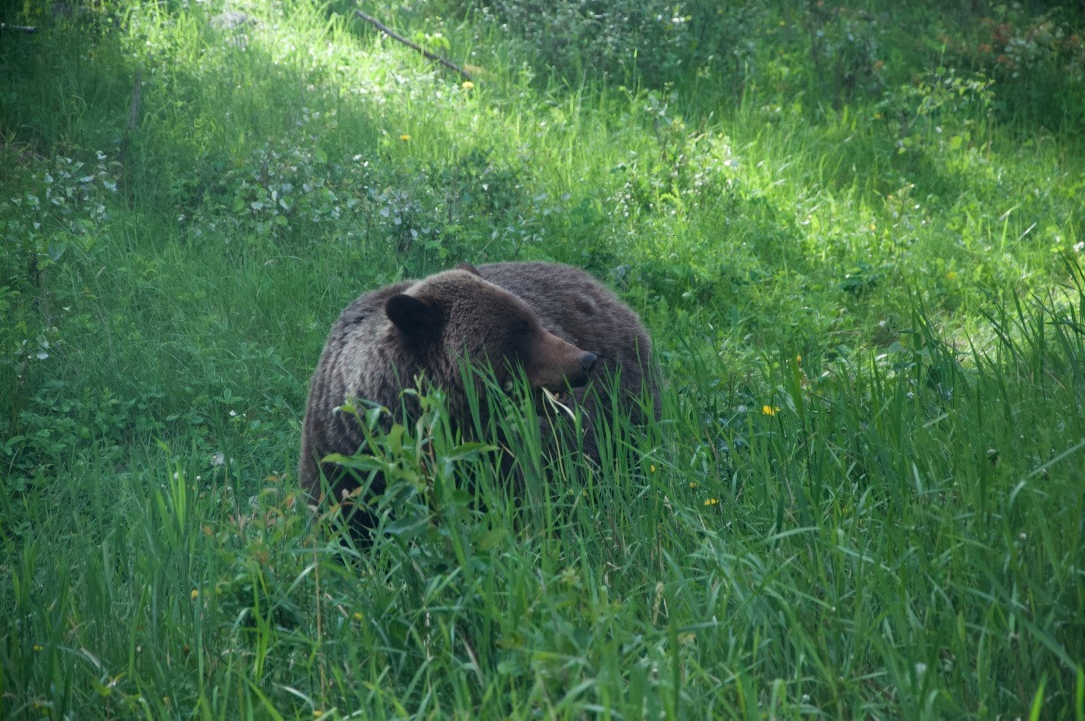 The most important thing is not to panic.

It was a skill I’d learned well over the years. Riding horses means learning to control your emotions. I had always been a little bit of a nervous rider, despite being obsessed with horses from a young age. I had a habit of tensing up, of anxiously pitching my body forward over jumps, of hanging on too tightly to my reins.

“Fearless” was not a word that applied to me—but it was something I worked toward.

Horses are extremely adept at picking up on our emotions; to keep my mounts calm, I’d had to learn how to relax in the saddle, to actively release the tensions I held in my body.

This skill of forcing myself into calm, even when my mind was protesting otherwise, was about to come in handy.

I was on horseback, and facing a grizzly bear.

It was my third summer working as a trail guide in Jasper National Park. Each day, I rode about four hours, taking out guests on one, two, and three hour rides. That August day I was leading a family of four, with two young girls—the youngest was so tiny that I was ponying her horse from my own.

The girls were absolutely in love with the horses from minute one. The mom, on the other hand, was a bit nervous: as soon as we left the yard and I finished my usual spiel—“Hello, I’m Caelan, please feel free to ask any questions…”—she piped up with, “What happens if we see a bear?”

I smiled and assured the family that bears were usually terrified of the horses. It was my third summer; I hardly ever worried about bears anymore. I spent most of my time twisted around in the saddle, chatting with the guests behind me, trusting my horse, Bert, to let me know if there was anything on the trail ahead of us.

Together, we’d had over a hundred bear encounters while riding, and almost zero problems from them. Most of the time, all we saw of bears was their rear end running away through the woods.

And then I felt Bert change his pace just slightly, the usual indication that he was looking at something. I turned around and realized there was a grizzly bear, maybe 50 metres away. In the middle of our trail. Looking right at us.

I immediately halted our ride. The horses all stood still, watching the bear. He was a fairly large grizzly, but in very poor shape: his fur was mangy, and he was so thin that you could see his hump and shoulders jutting out sharply. We were only about two minutes from the barn; he was interested in the salt licks in one of the horse paddocks.

That’s what it was doing now.

But what really worried me was the condition of the bear: it was much too thin. By August in the Rockies, a healthy bear should be round with fat. If it gets too close to winter, which often starts in October, and the bear hasn’t gained enough weight, it will start making riskier moves in an effort to gain mass amounts of calories.

In other words, we were running into the most dangerous type of bear—a desperately thin one—and I had two small children and a couple of nervous parents behind me.

We were right at the start of the trail, so we couldn’t exactly re-route. I wasn’t going to put my riders in danger, but I thought I’d try and see if I could still make this ride happen.

I called the barn for backup.

One guide took over watching my riders. I handed her the pony rope for my youngest rider and promised the group I’d be back in a minute.

What we hadn’t realized was that there was another person present, across from us and near the horse paddocks. She’d been checking on her horse when she saw the bear, and locked herself in the hay shed. Now, she started yelling at the bear from his other side.

The poor bear must have felt surrounded. Instead of backing off, he bluff charged: taking several massive steps towards me, showing his teeth, and swiping a paw aggressively in our direction—a paw covered in four-inch claws, equivalent to a handful of daggers.

In response, Bert, my horse, proved again that he was smarter than me.

Bert likes to chase bears. I actually wrote a whole story about it. But he knows when he’s outmatched.

As the bear swiped at us, Bert picked up his front feet and firmly spun around in the opposite direction, the horse equivalent of a “NOPE!” He proceeded to calmly walk us back to the rest of the horses, while the other guide followed, keeping an eye on the bear. It didn’t follow, but it stood its ground.

I returned to my group, smiling at them with strongly forced cheer as my heart pounded in my chest.

“All right! So, looks like we’re going to have to re-route.”

The family stared at me, agape. The mom told me I was a lot braver than she was. I pretended to smile and shrugged modestly.

There wasn’t actually a re-route, so I had to take them out on an improvised trail. It worked. The girls had a great time. We didn’t see the bear again, but I’m pretty sure the mom was counting down the seconds until it was over. So was I.

The next day at work, I was shaken by that encounter. I’d never had a problem with a bear before, and now one had threatened to attack me. I’d acted unwisely in the moment; I should have simply led my ride away as soon as we saw the bear. I knew it was my fault, and I also knew there was still a scary, severely underweight, potentially dangerous bear that could still be in the woods, even on our trail again.

But when you work in the Rocky Mountains, you could run into a dangerous bear, or a dangerous animal, any day.

So what do you do?

I forced myself to take some deep breaths. Then I smiled, swung myself up into the saddle, and took my chances.

I haven’t been eaten yet.