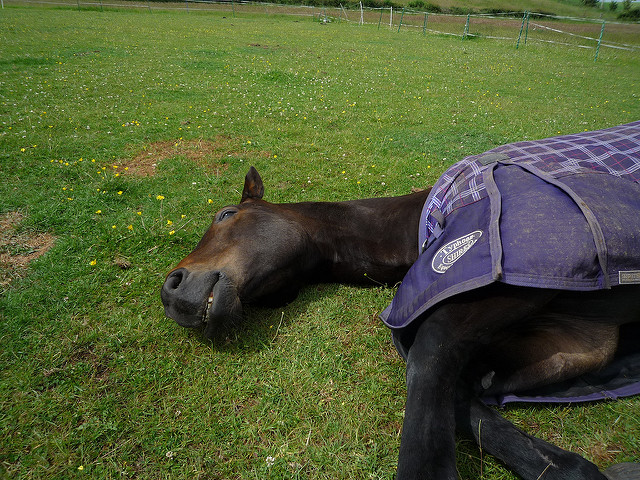 You have a horse. You take him to shows (doesn’t really matter much what kind). Congratulations, you horse is now a “performance” horse.

You are undoubtedly subjected to—or going to be subjected to—an almost bewildering array of products and services, most of which have little in the way of evidence for their effectiveness, some of which are almost completely nonsensical. You’re probably going to consider many of them because you want to do what’s best for your investment (an investment that’s both financial and emotional). That’s fine, to a point.

But before you get lost in the wilderness of competing medical claims, I want you to consider what I think are probably the four biggest problems that affect performance horses, and, by proxy, their owners. If you can avoid these things, you’ve got the battle at least half won.

Put a horse in a ring with three barrels in it, and they’ll probably sniff them, they may knock them over and roll them around, but they surely won’t run around them in a cloverleaf pattern to see who has the fastest time. Same thing if you throw a horse in a ring full of jumps—they’ll mostly just go around them.

They have to be trained for what’s expected of them. Training has both physical and mental aspects. And I think that many performance horses get overtrained in both areas.

The more you train, the higher physical demands are placed on horses, the increased likelihood there is of injury. Now, of course, you have to train your horse to a certain point. Without any physical activity at all, muscle atrophies and bone mineral content decreased. Physical training stimulates muscle growth and strengthens bone. But too much stress or overload can lead to tissue breakdown and injury.

Think of your horse’s legs like a paperclip. You can bend the clip back and forth a few times, and it’s no big deal. Keep bending and the clip weakens, and it eventually breaks.

The analogy isn’t perfect, of course. In fact, if paperclips were horses (or any athlete) and you give them a couple of days off, the minor stress caused by the bending would fix itself: in fact, the clip would even get a little stronger (which is why training is important).

But it’s the incessant, repetitive stuff that breaks paperclips (and horses) down. Throw the additional stress of a series of shows in there, and you have horses that are constantly being worked, in the same direction, on the same activity, day after day, again and again. Pretty soon, something breaks—tendon, joint, muscle, or ligament—just like a paperclip.

The solution? Vary your training. Do different stuff. Do equestrian cross-training, as it were. Ride your horse on the trails, or in the hills. Walk, trot, canter, and gallop. Play games with them. Horses are amazing athletes, and it’s not that hard to keep them fit enough for the activities that they are asked to do. But don’t overdo it; that’s when horses start getting hurt.

Horses are not necessarily the most intelligent creatures. They don’t problem solve well. No math for them (which, come to think of it, isn’t really all that bad of a thing)! But what they do have is amazing memories. Once you teach them something, they pretty much have it learned.

There’s been research on horse memory, and it explains a lot about horses, actually. In one fascinating two-part study of 26 horses, the horses first learned to walk backward to get a food reward, using commands given by a researcher. In the second part of the experiment, horses had to cross an obstacle after a bell rang in order to get spooked by a puff of air (you know how horses are about those evil air puffs). While the study did show some influence on the temperament of the horse on how well they learned the tasks, when they were brought back to do the same things 22 months later (almost two years!) their recall was… perfect. Another study has demonstrated recall capacity for up to 10 years!

So what does this mean for training? Well, if you think of the mind in the same way that you think of a muscle, if you overtrain it, it can break. Once horses have learned how to do something, they don’t need constant reinforcement. Once a horse learns what’s expected of him, he’s pretty much got it figured out. If you make him do it again and again, day after day, you’re going to annoy him, and eventually you’re going to make him nuts.

What to do? Don’t train him for long periods of time. Twenty or 30 minute sessions should be all he needs. And that’s not 20 or 30 minutes of non-stop training—that’s warm-up and cool down, too. And do your training, but do some fun stuff, too.

Oh, one last thing—try to end your session on a positive note. You want him to remember training sessions as fun, not drudgery.

When it comes to mental training, there’s one other important thing. No matter what you’re doing, you’re always training your horse. Horses are watching and learning all the time, not just during the time that you pick to train them for their athletic discipline. Whenever you interact with your horse, you’re training him. Pay attention to him and make sure that your interactions are positive (you want your horse to do what you want, not what he wants). And, for goodness sake, give him something to look forward to besides another training session of the same old thing.

I know that you got your performance horse with expectations. That’s fine, but in my experience, when horses don’t perform up to expectations, people most commonly think that there has to be some sort of physical reason.

The saddle doesn’t fit. The hocks need injecting. Must be the bit. Teeth need floating. Ulcers. EPM. Maybe it’s Lyme Disease. There are a lot of things at which you can point fingers.

When you’re thinking that your horse must have something wrong with him, it helps to keep in mind the old adage: “When you point one finger, there are three fingers pointing back to you.” Or, as expressed by Dire Straits, in “Solid Rock” (1980):

“Because the heart that you break
That’s the one that you rely on
The bed that you make
That’s the one you gotta lie on
When you point your finger ‘cuz your plan fell through
You got three more fingers pointing back at you, yea”

Anyway, you can’t blame everything on the horse. Look inward. Are you doing your part to keep up the athletic fitness of the team? Are you prepared for the show? Are you working on making yourself better? Is your horse capable of what you’re asking him to do?

Many performance problems have nothing to do with the state of your horse’s health. Unless there’s something obvious, make sure you’re covering all of your own bases. Be open to the possibility that there’s not some physical abnormality to blame for your horse not meeting your expectations.

4.  Their owners believe that “prevention” comes in a syringe or in a bucket

For example, there’s no product—not one—that has been shown to prevent arthritis (and I could give lots of other examples). There may be specific products for specific circumstances, of course, but in reality, most of the things that are done “just in case” are a waste of time and your hard-earned money.

The way to prevent problems for your horse is to spend time with him, let him be a horse (he’s not a performance machine), make sure he has regular exercise (but not too much), feed him good quality food and clean water, and look after his medical and shoeing/trimming needs.

There are no miracle solutions, no matter how attractively packaged them may be, and no matter how much they are earnestly supported by a paid endorser. No powder or potion is going to prevent problems caused by overuse or neglect.

I’m not saying that if you pay attention to these things your horse will never have a problem. If you use your horse for performance/athletic activities, there’s a chance that something might go wrong, no matter what you do.

But if you avoid the four big pitfalls affecting performance horses, I bet you’ll find your horse is generally happier, and more willing and eager to perform. You’ll hang out with him more, and find out what a great guy he really is. Plus, you’ll save a whole bunch of money on products and services. You’ll be happier, too!