Disabled In The Arc, Is There Another Race Ahead for Enable?

Home > Blog > Racing > Disabled In The Arc, Is There Another Race Ahead for Enable? 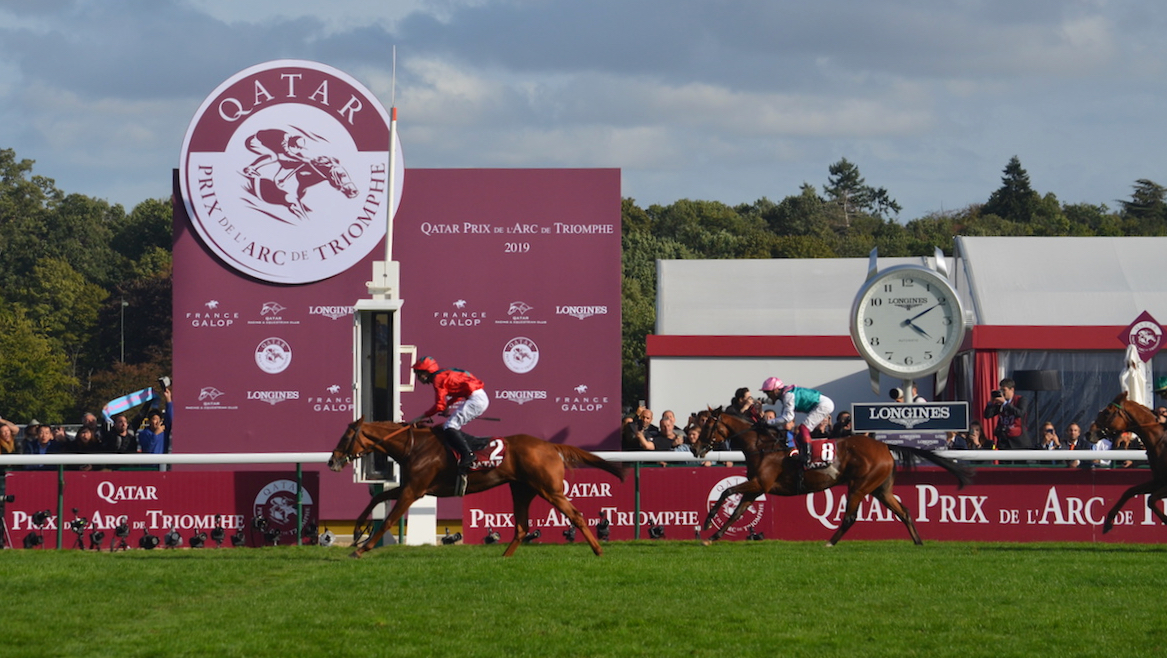 Seven other horses had tried and failed, most recently Treve in 2015. But as the group of 12 elite Thoroughbreds turned for home at Longchamp Sunday, it appeared five-year-old British mare Enable was about to break the Curse of the Third Arc and legitimize her status as a legend.

She had put away her longtime foe Magical, who had taken a brief lead, and French Derby-winning rising star Softsass. The most feared Japanese challenger, Kiseki, was not challenging.

As her lead widened, the roar of the 40,000-plus crowd grew deafening, urging on the favorite in Europe’s richest, most prestigious race.

But French rider Pierre-Charles Boudot had saved his mount Waldgeist in the early going on a turf course softened by two days of early morning rain, found a clear lane in the center of the course and dashed past the rail-hugging leader in the final 50 yards to give the 16-1 British-bred world traveler a 1 3/4-length first victory over Enable in four tries, her first loss since her maiden run in a 15-race career.

One could almost feel the air of excitement literally drain from Longchamp as stunned racing fans and commentators were once again reminded there is a reason they run the race.

Fans and commentators were not the only ones stunned by what some have called the greatest upset in Prix de l’Arc de Triomphe history, though Waldgeist had run a strong fourth to Enable in last year’s Arc.

“I didn’t expect that any horse could beat Enable,” conceded Deitrich Von Boetticher, part owner of Waldgeist as a member of the Waldlerche Partnership. Waldlerche is Waldgeist’s dam, Galileo his sire.

“We have seen her before and she is such an incredible, superior filly. There was not much hope that any horse could beat her. But Waldgeist looked well, Andre [trainer Andre Fabre] was positive and Andre is a man you would never, ever doubt.”

It was Fabre’s eighth Arc victory.

If Von Boetticher doubted his horse’s chances, jockey Boudot did not. In what seemed like a statement that embraced the excitement of the moment, the rising French jockey said, “We will win the Arc” after Waldgeist prevailed in the Prix Foy (FR-G2) Sept. 15, also at Longchamp. The five-year-old also won the Prix Ganay (FR-G1) April 28 at Longchamp in what was termed “a shocking upset” over Godolphin’s Ghaiyyath.

Early October’s whimsical Parisian climate may have had a role in the outcome following consecutive days of early morning rain.

“The ground was very sticky and we struggled in the first part of the race,” Enable’s jockey Frankie Dettori said after the race, one he’d won six times before.

“I let her find her feet and she responded. I waited until the final 300 meters to urge her on, but didn’t find as much as I thought. She just folded a bit. The winner was too good for me today. We passed the 200 meters and I had no horse left. I think ground had a lot to do with it.”

The Arc is Waldgeist’s fourth Group 1 win and perhaps his last race with his stock as a potential sire as high as it may rise.

“Of course, it would be natural to say it can’t get any better than this and we should finish, but I have known [trainer] Andre for so many years that I would never make a decision he doesn’t approve,” cautioned Von Boetticher.

The breeding shed does seem the likeliest alternative for a four-time Group 1 winner that has raced in six countries and has now claimed the Arc. But connections deferred from discussing future plans, saying simply, “With a horse like this, anything is possible.”

Waldgeist’s Arc win comes with an automatic, expense-paid ticket to the Breeders’ Cup Turf Nov. 2 at Santa Anita where the “anything is possible” scenario could include a meeting with…

Long thought to be the plan to retire her after what was hoped to be an Arc victory and her final race, her connections too seem to be rethinking her future after the Arc disappointment.

“The first thing is to get her back home. Of course, the feedback from (trainer) John Gosden and his team will be vital in anything like this,” Grimpthorpe insisted.

“I think in everybody’s mind it’s getting towards the end; whether she has one more race or whether she races next year is conjecture and speculation. She’s had a wonderful career and there always comes a time when you have to say enough is enough. But I think if she’s in good enough shape, then Prince Khalid will have the option of continuing or not.”

As for Enable’s disappointing finish?

“Well, it’s not as we had hoped, but how can we complain?” said Grimthorpe. “We don’t love her any less.”