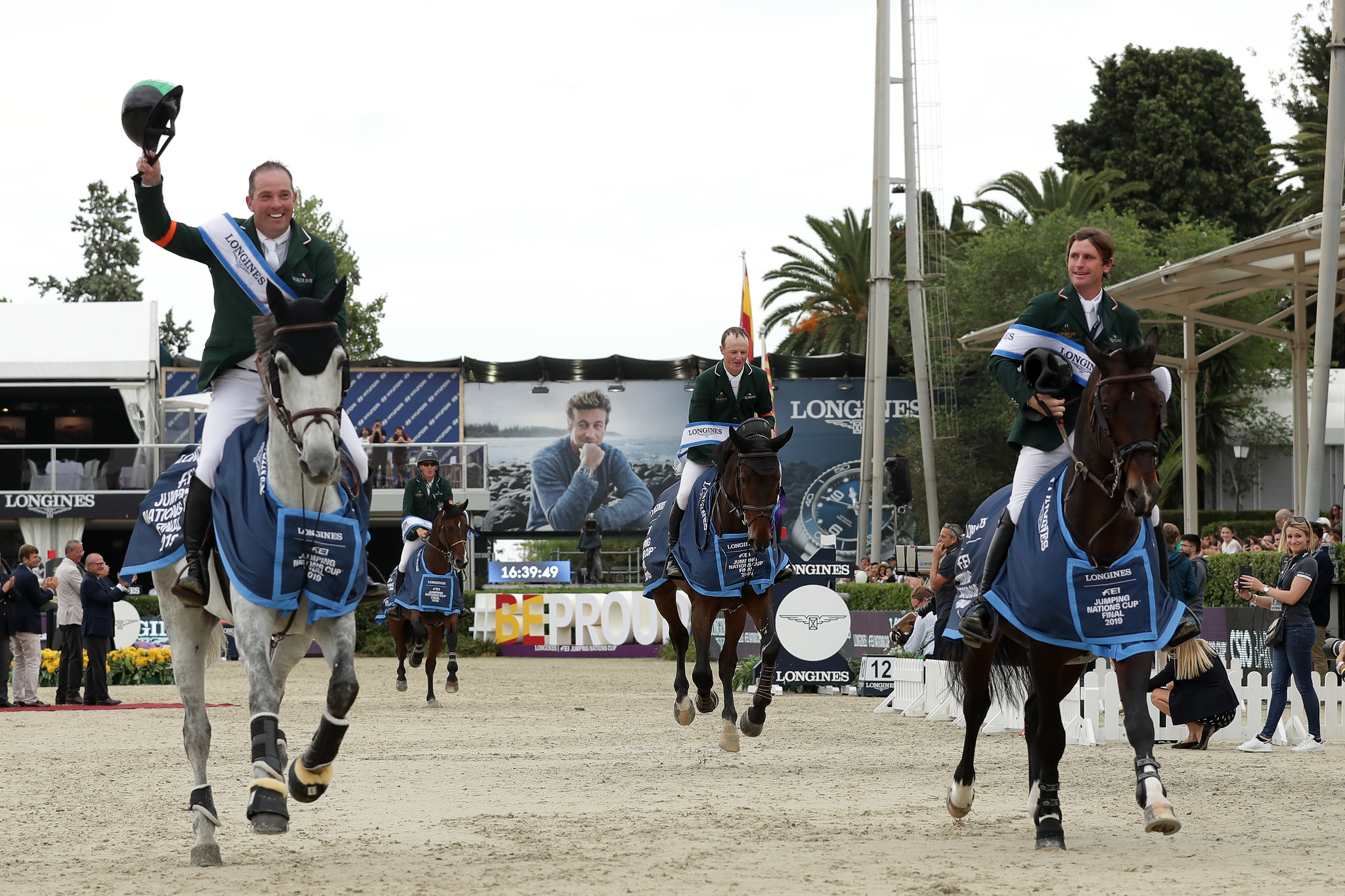 When Olympic gold medalist Rodrigo Pessoa (BRA) was tapped as chef d’equipe for the Irish show jumping team in 2017, Ireland had not qualified a team for an Olympic Games since 2004.

This despite consistently having more riders in the world top 50 than any other nation and securing individual Olympic qualification at every Games between based on their FEI rankings.

On Sunday, that unlucky streak came to an end.

Of the eight nations to contest the medal deciding round of the 2019 Longines FEI Jumping Nations Cup™ Final in Barcelona, Spain, Pessoa’s team of Peter Moloney, Paul O’Shea, Darragh Kenny and Cian O’Connor clinched not only victory for Ireland but Olympic qualification as well.

And they did it with just a single time fault—beating the defending champions and current European champions from Belgium and besting the course of Santiago Varela (ESP), who will also be designing the tracks for Tokyo 2020.

Which is to say, Pessoa was rather pleased with his team’s effort.

“We already had two disciplines qualified [Dressage and Eventing] but it’s been a long time since Ireland, a great equestrian nation, has been at the Olympics Games in show jumping and it was this team’s responsibility to bring it home,” said the chef.

“That for me was the most stressful thing [on Sunday], to feel what they felt and how hard it must have been for them to ride in those conditions. They had such a great mental attitude—nothing could have stopped them from achieving what they did. I was called in a few years ago to do a job [achieve Olympic Jumping qualification] so now it’s mission accomplished!”

Here are 13 things to know about the team that put Ireland’s 2020 Olympic medal hopes on the map.

Moloney’s mount, Chianti’s Champion, is a horse he took over from Germany’s Frank Schuttert in March 2019. In the past seven months, they’ve contested FIVE 5* Nations Cups, which is five more 5* Nations Cups than he contested in all of 2018.

Paul O’Shea logged the then-biggest victory of his career in February 2019 when he claimed the 5* $210,000 Longines Grand Prix with Imerald van’t Voorhof during the Longines FEI Nations Cup™ of USA week at Deeridge Farm in Wellington, FL.

He went on to ride for Ireland in three 5* Nations Cups appearances leading up to the Final in Barcelona (Dublin, Sopot, and Hickstead)—and posted double clear rounds in each!

Also in the past two years, O’Shea has been training with Henri Prudent, dressage coach Jane Savoie, and working with dressage rider Ruth Hogan-Poulsen. #NotAConincidence

Darragh Kenny and Balou du Reventon sealed Ireland’s ticket to Tokyo over rivals Colombia and Italy on Sunday when they posted a single time fault over Varela’s course.

That same single time fault cost Kenny €33,333. As one of only nine clears in Round I of the Nations Cup Final, Kenny was in the running for the €100,000 bonus for double-clear rounds. It was instead divided between Belgium’s Olivier Philippaerts and Germany’s Daniel Deusser.

Kenny is currently ranked ninth in the world. In the 2019 season, he’s competed an astounding 26 HORSES at the FEI level and has logged 17 international wins, 13 of them 5* classes.

Anchorman O’Connor sealed victory for the team with a clear aboard PSG Final. Previously ridden by Austria’s Max Kuhner, the nine-year-old gelding has campaigned under O’Connor internationally since January this year.

O’Connor was a member of the last Olympic team fielded by Ireland in Athens (GRE) in 2004, as well, and won an individual bronze at the 2012 London Games.

Kevin Babington was also a member of the 2004 team, finishing individually fourth with the Carling King that year. Four weeks ago, he sustained life-changing injuries in a riding accident at the Hampton Classic Horse Show in New York. The team honored Babington with armbands bearing his name in Barcelona.