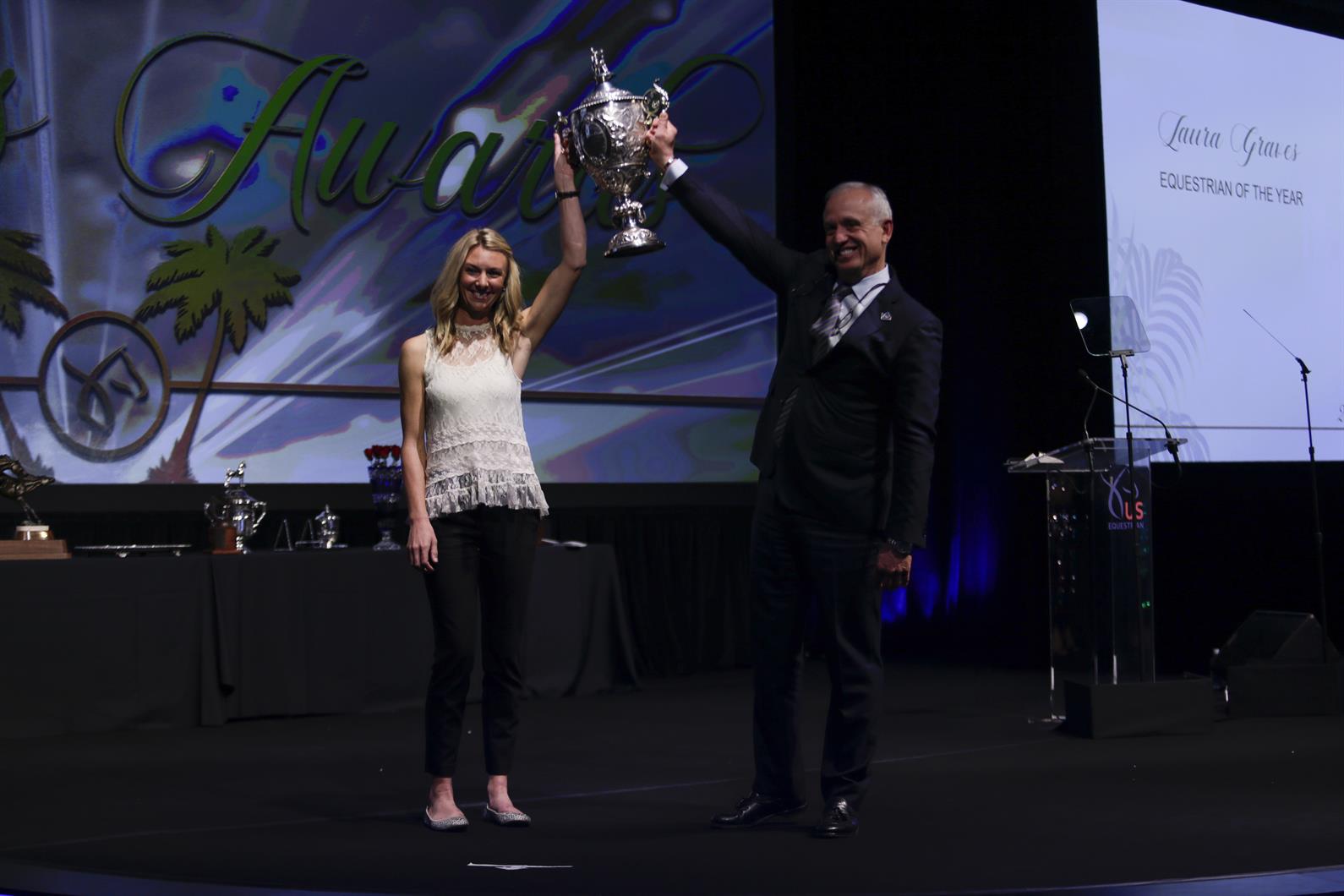 Everyone can breathe easy tonight.

Laura Graves, the only correct choice for 2018 USEF Equestrian of the Year title, took home the Robert P. Strub Trophy at the Pegasus Awards last night.

It’s an honor that has eluded the Florida-based rider for the past four years and one that has not been won by a dressage rider since 2011. (Steffen Peters took it home that year and in both 2009 and 2008.)

But it’s that first part you should pay attention to.

Graves has been nominated for the annual title every year since 2014 when she skyrocketed onto the world stage as the breakout star of the World Equestrian Games, scoring a phenomenal 82.036% in the Freestyle aboard Verdades. Only three Americans before her had ever scored over 80% in a championship.

In the four years since, she and the 16-year-old Dutch Warmblood gelding have continued to amass medals and new records for The Dutta Corp. U.S. Dressage Team.

In 2015, they captured team gold and individual silver at the Pan American Games in Toronto. At 2016 Rio Olympic Games, she and “Diddy” scored three personal bests to help secure team bronze. And at the 2017 FEI World Cup™ Final in Omaha, they took home the individual silver and beat Germany’s Isabell Werth, the reigning Queen of dressage, in the Grand Prix.

But if Graves and Verdades were the darlings of American dressage in the years prior, 2018 was the year they went supernova.

The phenomenally talented pair earned eight first-place finishes in the U.S. and abroad throughout the year. They helped capture a team silver medal at the FEI World Equestrian Games™ Tryon, and they made history in the Grand Prix Special as the first American combination to earn an individual silver medal at a world championship. To top off the year, Graves and Verdades took over the number-one spot on the FEI Dressage World Ranking in October—a feat never before accomplished by an American rider!

All of which is to say, it would have been criminally unjust had she not won the 2018 Equestrian of the Year title.

Just don’t expect Graves to suggest as much.

“I come from a family of athletes, and it wasn’t until I settled into equestrian sport that I really became comfortable with myself. If it weren’t for the family I found in equestrian sport, I would be just an uncoordinated awkward girl without very many friends, so thank you all for being my friends,” said the newly crowned title holder.

“There are so many people who make this world turn for me, many who are here tonight: I have my amazing family, Betsy Juliano, Debbie McDonald, my amazing teammates, my vets and farriers. But it’s honestly a bigger community than my little world that turns. It’s all of you who are members, all of you who support equestrian sport, whether it be dressage, jumping, or whatever your sport is, our connection to the horse unites us all.”

If there was a trophy for gracious statements on stage, Graves would have won that too.