Justify Doubters Not Finished Yet 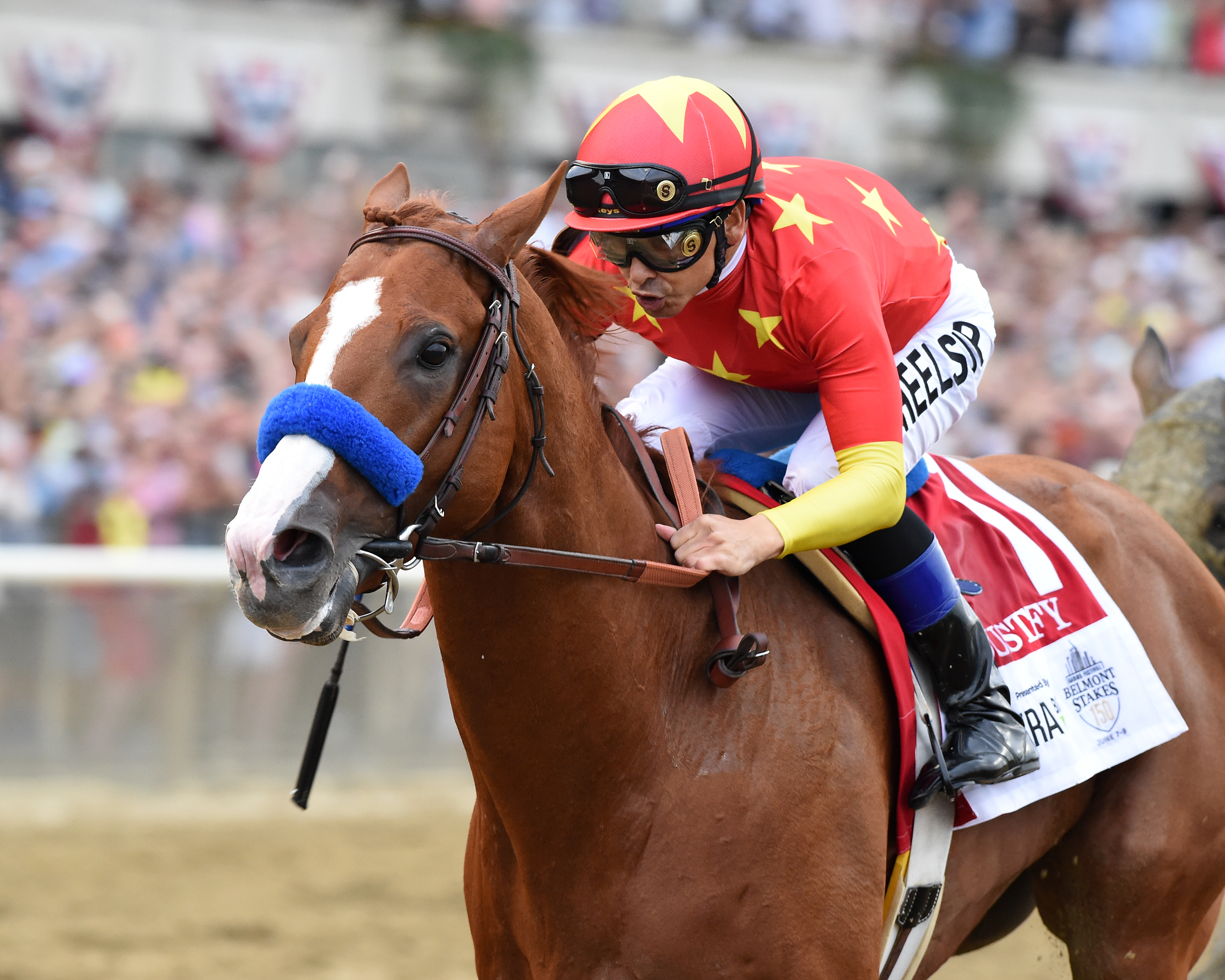 Justify completed the Belmont Stakes in a relatively slow 2:28.18—perhaps because he continues to drag along doubters.

Not long after the big chestnut son of Scat Daddy became the 13th winner of the American Triple Crown, the question marks arose.

Potential prime competitor Audible, co-owned with Justify by Winstar, was not entered, nor was Kentucky Derby runnerup Good Magic.

The time was slow.

The rest of the field was tired (Bravazo), inexperienced (Tenfold) or weak.

But the largest question mark was raised by competitors.

“It looked like he was more of a football offensive lineman than a racehorse,” observed Mike Repole speaking to the New York Post. Repole is co-owner of Noble Indy and Vino Rosso, two horses gated outside.

“Why would you send a horse that breaks bad and take everybody out, then come back inside?” questioned Vino Rosso jockey John Velazquez.

They suggested Restoring Hope, also trained by Bob Baffert and ridden by Florent Geroux, tracked Justify, first outside then inside, to block potential stalkers from gaining a better closing position.

“I have no earthly idea what Florent was thinking or what was his race strategy,” opined Restoring Hope’s owner, Gary West.

“Restoring Hope is a speed horse,” explained Baffert when questioned. “His only chance of winning was to stay close.”

So, as sportscaster Warner Wolf would say back in the day: “Let’s go to the videotape!” Well, replay. Follow along.

Justify breaks cleanly from his post 1 rail position and assumes the lead, the identical strategy followed in the Derby and Preakness. Restoring Hope (post 5, pink jockey silks) has a good inside position, but curiously breaks to the outside as they near the first turn. In fact, he is the leader at this point—so technically it is not a gate-to-wire victory.

Restoring Hope is wide on the outside going into the first of the notoriously wide Belmont turns. This does seem a curious position for a speed horse, usually placed inside and in front to tire closers. Vino Rosso and Noble Indy broke from outside posts 8 and 9.

As they go into the backstretch, Restoring Hope breaks back to the inside maintaining second, with Bravazo and Tenfold, the two horses that almost caught Justify in the Preakness, now in third and fourth as they complete the opening quarter mile in 23:37.00, quite fast.

Restoring Hope remains second in the backstretch with Bravazo only a neck back on the inside in third, Tenfold in fourth and Vino Rosso now in fifth. The ultimate runner-up Gronkowski is a very dead last by approximately 15 lengths.

The half mile is completed in 48:11.00, a bit slower as jockey Mike Smith puts Justify into a rhythmic pace while still maintaining a length lead.

At the 3/4-mile mark, completed in 1:13.21, the order remains the same with Justify still leading by a length over his stablemate, but Bravazo on the inside is beginning to move. Vino Rosso is five lengths from the leader, so the “usual suspects” are in a reasonable position as the pack is stretching out a bit. Gronkowski is still last.

As they round the far turn, Mike Smith shows Justify the whip and he picks up the pace, lengthening the lead to two lengths. At this point, Vino Rosso moves up to second on the outside and closes to within a half-length. Bravazo falls back slightly on the rail. They have completed the mile in 1:38.09, a fair clip.

As they near the top of the stretch Mike Smith has not yet pushed the button on Justify, even though he is already being challenged. This suggests Smith believes he still has a lot of horse left.

They approach the long Belmont stretch with Justify maintaining a near-length over Vino Rosso. Hofburg begins to mount a challenge. With no one save perhaps his competitors noticing, Gronkowski has woven through the stretched-out pack to take an outside position for a closing run.

As they round the turn and go into the stretch, Smith gives Justify four strokes of the whip and the colt responds, lengthening the lead to two lengths. But Gronkowski closes that lead to 1 1/4 lengths—and is moving faster than Justify—as they approach and cross the finish line. Hofburg and Vino Rosso are third and fourth in a photo finish.

Looking at the replay, Restoring Hope’s weaving trip is odd at best, but any challenge could not prove it directly impeded the progress of any horse save going into the first turn when Noble Indy and Vino Rosso are blocked by Restoring Hope’s outside position. Far-in-last and out-of-the scrum Gronkowki closes to finish a strong second and both Hofburg and Vino Rosso tire.

But that is post-race analysis. The question that remains: Why would you enter a 30-1 longshot, known only as a speed horse, in a 1 1/2 mile race?

And consider this: Suppose Restoring Hope had indeed gone to the lead as he could have instead of outside then back inside and mounted a successful challenge to Justify? Having ruined the Triple Crown bid, would Florent Geroux ever get a ride again on a Baffert horse?

Equally interesting is that Justify’s owners may not have wanted to jeopardize their Triple Crown chance by entering co-owned Audible.

And surely a large part of that reason is money.

Winstar, China Horse Club whose silks Smith wore in the Belmont—they are a variation of the Chinese flag—and SF Racing, financed in part by billionaire philanthropist George Soros, sold the majority breeding rights to John Magnier’s Ireland-based Coolmore, which in the U.S. operates Ashford Stud breeding farm in Frankfort, Kentucky, halfway between Lexington and Louisville in the heart of Bluegrass country.

The agreement has not yet been finalized because of tax reasons, but it called for a $60 million pricetag. Because it was inked before the Belmont, a $15 million bonus would be added if Justify won the Belmont and the Triple Crown. It set Justify’s breeding price at $150,000 per live foal. The original owners retain an undisclosed portion of the breeding proceeds.

The deal is the richest in history. It supplants the previous high for rights to American Pharoah, which supplanted the previous high for Fusaichi Pegasus, winner of the 2000 Kentucky Derby. All three champions will now stand for Coolmore at Ashford Stud, along with an impressive roster of other greats.

So, was Winstar motivated to withdraw Audible because it stood to gain an additional $15 million and a portion of breeding monies that may be gained by more or more favorable bookings? This is a difficult question to answer.

But the owners tried. How? By declaring the day after the Belmont Stakes that Justify would continue to race throughout 2018 before going to Ashford Stud for the 2019 breeding season.

Having already earned $3.8 million in winnings, a path similar to that of American Pharoah—the Haskell Invitational in New Jersey July 29 at Monmouth Park, New Jersey; the Travers Stakes August 25 at Saratoga, a prep race in the Fall and the Breeders’ Cup Classic at Churchill Downs November 3—would both add significantly to his earnings and silence doubters about his greatness, assuming favorable outcomes.

Justify could even run in the $16 million Pegasus at Florida’s Gulfstream Park January 26, 2019 after collecting a bundle of Eclipse Awards and still be ready for the 2019 breeding season at Ashford Stud.

But perhaps there is another reason.

American Pharoah’s Triple Crown win in 2015 came following a 37-year Triple Crown drought (Affirmed, 1978). It was hoped to be a way to involve a new generation of race fans, a young generation, the largest in the country’s history, a highly mobile—both physically and technologically—generation as suggested by the mobile-phone-encrusted June 15, 2015 cover photo of Sports Illustrated at the Belmont finish line. 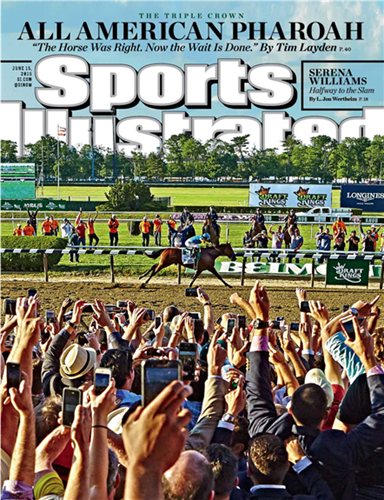 Live attendance at racetracks on ordinary race days continues to diminish. Tracks often cut back on their schedules because of the lack of runners. There was speculation before this year’s Preakness that the race soon would be moved to Maryland’s Laurel Park because of the cost of refurbishing ageing Pimlico. The amount of the handle—the collective amount of wagers—varies.

Some younger potential fans complain of the length of time between races, a complaint similar to that of major league baseball, seeking ways to shorten games due to dwindling attendance in some markets.

To address these concerns, some tracks have resorted to adding events like concerts. Others want to add night racing since working adults can no longer spend a long, languorous day at the race track.

The racing industry as a whole has embraced casinos and off-track-betting. No doubt it hopes the recent U.S. Supreme Court ruling that opens the door for sports betting on a state-by-state basis will add to the betting largesse.

So, where are the fans? They continue show up for signature events like the Triple Crown races. Some were even seen to have wept as Justify crossed the finish line at Belmont. They then go home and don’t return again for another Triple Crown year.

Some think the industry has concerned itself more with wagering than with promoting its stars—the horses.

One is reminded of the career of the remarkable Zenyatta, ironically ridden by Mike Smith. Famous for her closing runs, Zenyatta was a three-time Eclipse Champion Older Female, 2008 Breeders’ Cup Ladies Champion, 2009 Breeders’ Cup Classic winner, 2010 Horse of the Year and the winner of over $7 million in purses.

Zenyatta was arguably the second-greatest female the sport has seen, after Ruffian. In what seems like a scene from a distant era, young girls would show up at Hollywood or Santa Anita Park sporting pink-and-blue clothes—her racing colors—bearing pink-and-blue signs that read “Girl Power!” The grandstands would be packed with her legion of fans.

A few years after her retirement from racing, one could look up into the stands at Santa Anita on a normal race day before the start of the 2014 Breeders’ Cup and see only a few hundred people in attendance.Hollywood Park closed as a racing venue in 2013.

The interest in racing that blossomed during Zenyatta’s career seemed to have ended with her last race, her only loss in 20 starts, after a patented closing run that came up short by a nose in the 2010 Breeders’ Cup Classic…to Blame.