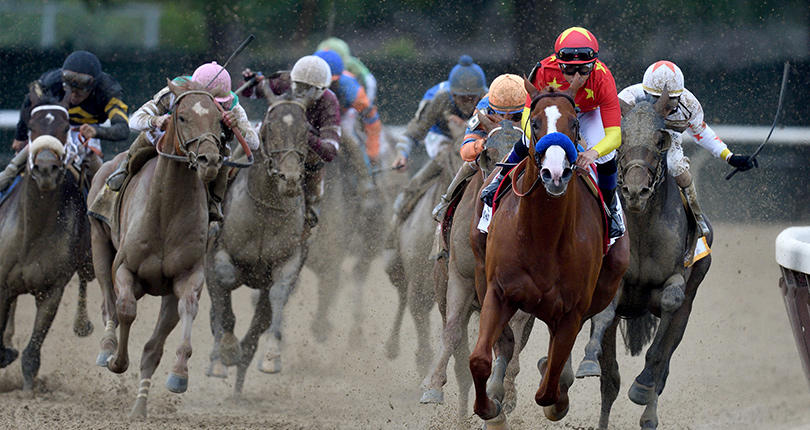 Carrying Hall of Fame jockey Mike Smith and a great many doubters, Justify became the 13th winner of the American Triple Crown Saturday at Belmont Park with a picture-perfect 1 3/4-length win over Gronkowski in the 150th running of the Belmont Stake.

Hofburg was 3/4 of a length in third and Vino Rosso a half-length back in fourth.

Justify broke well from the rail post on a fast, firm track and immediately went to the lead he maintained throughout the race. The son of Scat Daddy was chased into the first turn by Restoring Hope on the far outside with Bravazo on pursuit inside.

Smith rode easily through the backstretch, but was challenged on the far turn and into the stretch by Vino Rosso. Smith asked more from Justify coming into the homestretch turn where he lengthened his lead to just over two lengths. Gronkowski offered the last challenge to close within the final margin.

Justify becomes the second undefeated Triple Crown winner (Seattle Slew, 1977) and the first to break the Curse of Apollo, winning the Kentucky Derby, and ultimately the Triple Crown, after not running as a two-year-old.

“My horse ran a tremendous race,” praised Smith, a Hall Of Fame jockey who has gained his first Triple Crown win at the age of 52. “This horse came from heaven. He’s just so brilliant. He was standing so still in the gate, I didn’t know if he would run. I just want to thank Bob Baffert for making my dream come true.”

“This is very emotional for me,” said trainer Bob Baffert who also presciently won his other two races on the Belmont undercard, one with Smith aboard Abel Tasman, a second with veteran Hoppertunity in the Brooklyn Invitational.

“I have a lot of love upstairs,” added Baffert in a usual reference to his parents after big wins. “I’m so happy. I waited to see that horse move up there (to the Triple Crown). But this is for Mike Smith. He deserves it.”

“American Pharoah will always be my first love,” affirmed Baffert, “but Justify could have won every race on the undercard today. The horse is brilliant.”

Asked about his reaction to a second Triple Crown in four years (American Pharoah, 2015), Baffert laughed and said, “It still feels pretty good.”