Baffert and Smith Hope to Justify Their Trust 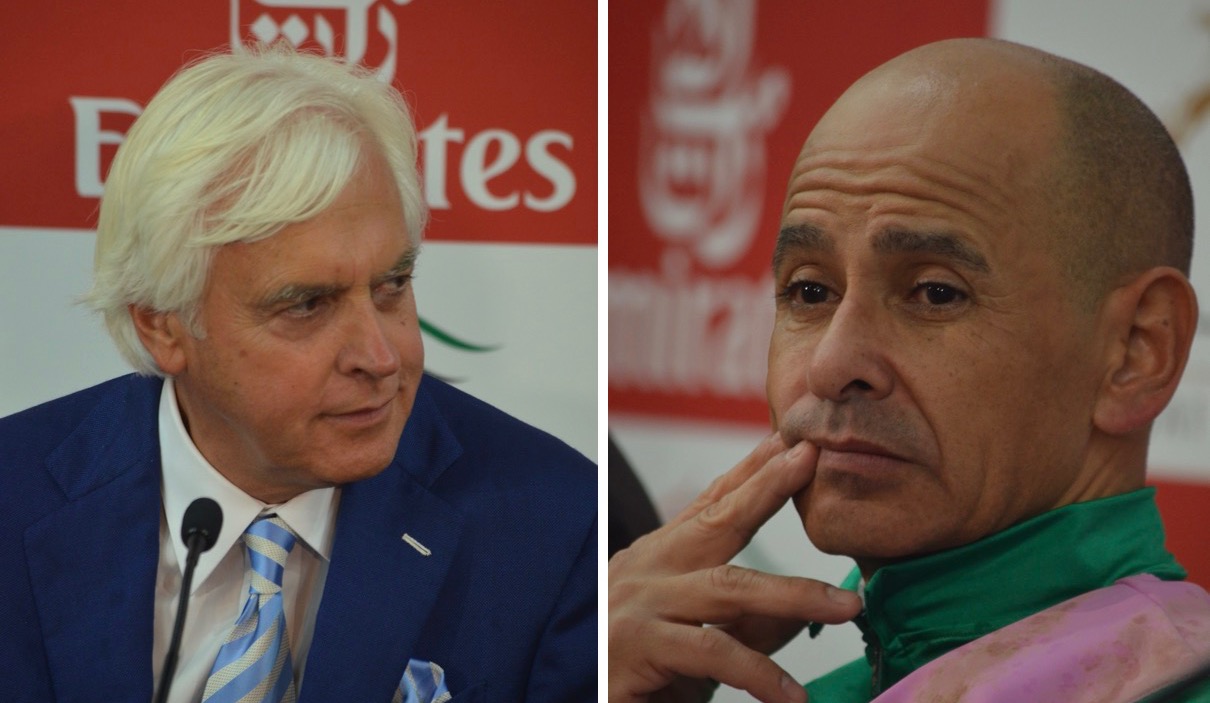 One is easily recognizable in jeans with his shock of white hair and ready smile.

The other is a diminutive collection of muscle and quiet determination, on first glance known only to those who have followed his stellar career.

They could not seem more different from one another based on appearance alone.

Hall Of Fame Trainer Bob Baffert (2009) and Hall Of Fame Jockey Mike Smith (2003) will seek to scale to another level of fame Saturday when they take on nine contenders in an attempt to make Justify the 13th winner of the American Triple Crown.

They have little in common save growing up in the Spanish-speaking Southwest—both are bi-lingual—and their winning resumes.

Baffert has won more than 2,800 races, earned purses worth nearly $250 million and has a strike rate that exceeds 22 percent. Coming into this year’s Triple Crown season, he had four Kentucky Derbys, five Preakness Stakes, two Belmont Stakes and a Triple Crown under his belt.

Smith has ridden over 5,000 winners in a career that has exceeded 32,000 races, a near-16 percent strike rate. Coming into 2018, he had won a Kentucky Derby, a Preakness and two Belmonts.

Together, Baffert and Smith won the rainiest, muddiest Kentucky Derby in recorded history May 5 at Churchill Downs by 2 1/2 lengths over Good Magic. Two weeks later, Smith battled seven contenders on the rain-soaked and fog-encrusted Pimlico track to snare a half-length victory over fast-closing Bravazo and Tenfold in the Preakness Stakes.

They battle history—and perhaps the weather again—in the 150th running of the Belmont Stakes, the “Test of Champions.”

Test indeed. At a mile-and-a-half, it is the longest of the Triple Crown races and the longest race any contender will face in their career. Dubbed the “Big Sandy,” the track is known for its surface and wide turns. To win this race takes a horse with tactical speed and unusual endurance, a jockey with racing smarts who can overcome a possible slow start, who knows when to “push the button” and find his horse’s winning gear.

And trust. Between horse and rider. Between trainer and jockey.

“He’s ‘Big Money Mike,'” said Baffert, referring to Smith’s nickname. “He’s the best there is in the business.”

“He’s a genius at what he does,” responded Smith about Baffert.

The pair were not always this complimentary of each other.

Smith will be 53 years old August 10, his riding career now in its 27th year. He’s been aboard some incredible horses—Zenyatta, Royal Delta, Songbird, Arrogate, a score more, now Justify. And he’s won some amazing races, the Belmont Stakes twice among them (with Drosselmeyer in 2010 and Palice Malice in 2013).

But Smith has never ridden to victory in a Triple Crown.

Victor Espinoza did that for Bob Baffert aboard American Pharoah in 2015, then added a Breeders’ Cup Classic win the same year. Smith’s response at the time was typically low-key and classy.

“I was happy for Victor,” credited Smith. “It had been a long time coming,” referring to the 1978 Triple Crown by Affirmed. “It was great to be a part of it.”

Smith finished fifth aboard 30-1 longshot Frammento in that Belmont. “I didn’t win, but I was still feeling pretty good about it.”

Now he has his own chance at history.

Smith is in demand as a rider, of course, as is Baffert a trainer. But a call to Smith’s riding agent is the first one Baffert makes now following what both regard as perhaps their greatest single win, Smith’s last-to-first hand-ride win aboard Arrogate on an unusually rain-soaked track in the 2017 Dubai World Cup.

“People think my Breeders’ Cup Classic win on Zenyatta was my greatest race,” said Smith in the post-race press conference. “I think this was.”

The greatest win may be yet to come.

Baffert and Smith first met in 2002. Both were well-regarded, but not yet the superstars they are now. Baffert had come up a Belmont win short of the Triple Crown with Silver Charm (1997) and Real Quiet (1998). But he had a two-year-old colt named Vindication, a son of the only undefeated Triple Crown winner, Seattle Slew (1977), that was going to get him over the Triple Crown hump. He would be The Big Horse, racing slang for a horse that inhaled steam and exhaled fire, a certain winner.

Smith was coming off a serious spinal injury suffered in a racing fall at Saratoga three years earlier. Both were in rebuild mode and seemed a good fit.

Wonderful enough to win the Breeders’ Cup Juvenile and the Kentucky Cup with Smith aboard and become an early favorite for The Kentucky Derby.

But the relationship between owners and trainers and jockeys is complicated. Certainly by a desire to win. Certainly by money in the very high stakes game of Thoroughbred racing and breeding. Trainers curry favor of owners to add potentially great horses to their string. Jockeys curry favor of trainers to have potentially winning mounts. Sometimes, it results in unfavorable outcomes.

Smith was taken off Vindication by Baffert in 2003, an owner’s decision no doubt, but the trainer promised to make it up to the rider in the future. Foregoing bitterness, Smith understood the decision since the replacement jockey, Jerry Bailey, was perhaps the world’s best rider. He was the jockey of Cigar, the world’s leading money winner at the end of his career, winner of the inaugural Dubai World Cup, then the world’s richest horse race.

All would go their separate ways for a time. Vindication would be injured and retired. Baffert would continue to pile up victories. Smith would revive his career, most notably aboard Zenyatta, who would go undefeated through all but her last of 20 races, losing by a nose to Blame in the 2010 Breeders’ Cup Classic.

Baffert would revisit Smith occasionally, as a rider for his homebred Bodemeister in the Kentucky Derby and later on Paynter for the Belmont. I’ll Have Another won the first in what would become a Triple Crown bid and Union Rags the second. Baffert lost a bit of confidence in Smith, thinking the jockey had lost those races. Smith is not convinced of the first, though he concedes the second.

But all that rises will converge. And so as Baffert’s and Smith’s stars rose, they would find themselves together again—of necessity.

In 2014, Baffert had two horses not ready for the Triple Crown season, but running that summer at Saratoga in the Travers, the “Midsummer Kentucky Derby.” The problem was both were ridden by Rafael Bejarano. One was graded stakes winner American Freedom, whose owners pressured Bejarano to choose their ride. It’s a business, so he did. That left Baffert without a rider at a time when leading New York jockeys were committed to other mounts.

So Baffert called Smith. And that is how the pair came back together again, with a record 13 1/2th length record win in the Travers, the Pegasus World Cup in January and that incredible Dubai World Cup on a grey lightning bolt named Arrogate. In an irony common in racing, Arrogate would fade in his final three starts, but still become the all-time leading money winner replacing Curlin and Jerry Bailey-guided Cigar, Smith’s replacement on Vindication.

The racetrack is an oval, as is the relationship among those who work it. And so it was that earlier this year, a well-regarded young rider named Drayden Van Dyke guided a large Chestnut colt to a maiden win at Santa Anita Park. But it was a troubled ride that annoyed Baffert.

Following that race, the trainer picked up the phone and the call must have gone something like this:

“Hello, Mike. This is Baffert. I have this colt named Justify….”