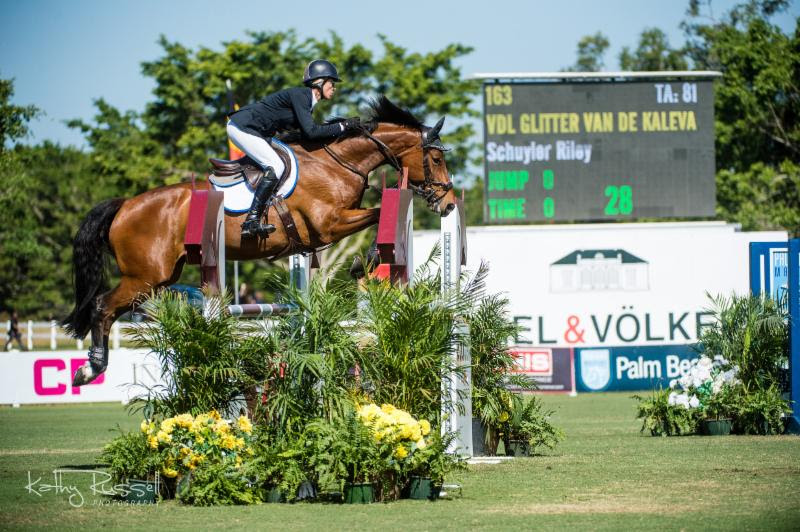 One rider. Two Classic Champions Tour classes. And a pair of promising prospects.

Schuyler Riley (USA) dominated the young horse series at the inaugural Palm Beach Open at Deeridge Farms in Wellington, FL last week, capturing the championship in both the six-year-old and seven-year-old divisions.

“We had a fabulous time out there on the grass,” said Riley. “I rode here on Friday with this mare and she was exceptional, she took second place. I was really looking forward to coming back today, and she jumped even better. I think that this is an incredibly valuable experience for a young horse, there is no better place to develop one than on this grass course.

“We actually just got Glitter about four weeks ago so we are just getting to know her. I have some training shows at my own facility on the grass, and she jumped well on the grass, so I decided that this was the perfect venue to try to bring a potential Grand Prix horse along. She really rose to the occasion. I am incredibly impressed with her brain, rideability and scope. I think there is a good future for this horse.”

Second place in the class went to Charlotte Jacobs riding Hi-Jack. Marlee Richter placed third with Captain America, the horse the earned the Award of Distinction for the 6-year-old division based on his rideability, quality of canter and jumping style.

In the seven-year-old division, Riley returned to the winner’s circle with the G-Force. The only pair to produce a double clear, they took first place in the $4,000 Classic Champions 7-Year-Old Jumper Time First Jump-Off class.

“My trip today on this horse was amazing,” said Riley. “The course designer did a wonderful job, setting a challenging but doable track. I feel that my young horse came here this week and was not only competitive but learned a lot. For me, I could not have expected a better week.

“G-Force won the first day, and then on the second day I got a little bit conservative at the end, so we were second, and then he won again today. My horse definitely improved through the week. I couldn’t ask for anything more. This horse is incredibly intelligent, the whole time on course he asks you what you want. He tries to be careful, and just does his best every time out.”

Kennedy Z and Kara Chad took second place in the class with one rail down in the jump-off in a time of 37.033 seconds as well as the Award of Distinction for the seven-year-old division. Third place went to Olympic veteran Ben Maher and Celina, with four faults in the jump-off and a time of 51.901 seconds.

Created in 2015 by Cynthia Hampton, Classic Champions Tour is specifically for five, six, and seven-year-old jumpers and is based on European principles to modernize the show experience for young horses in North America and features courses designed by experienced, specifically-trained designers to fit horses’ age with adapted heights, types of fences, lines, and turns, all over top-notch footing, which is a trademark of Deeridge Farms.