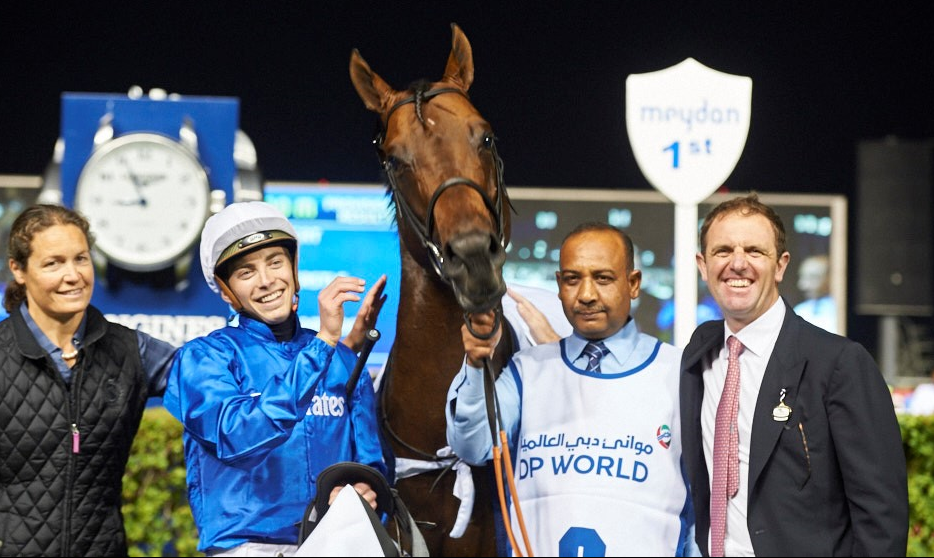 A night after the eclipsed blue super moon, the boys in blue eclipsed the competition and remained super, securing a sweep of Group 2 events and a consecutive Dubai World Cup Carnival grand slam for Godolphin at Meydan Thursday.

The star of the evening was Jungle Cat, the Carnival regular and fan favorite who scratched his way to a narrow 3/4-length win over South Africa’s Janoobi in the seven-furlong $250,000 Group 2 Al Fahidi Fort turf sprint feature with Godolphin stable mate Dream Castle left dreaming a half-length back.

“He’s a Carnival veteran now and he never runs a bad race,” beamed trainer Charlie Appleby. “He was fourth in the six-furlong Al Quoz Sprint on World Cup Day in March,” explained the trainer of his next step. “We have to decide if we should try him at a mile or drop back to six furlongs. There is nothing left for him at this distance.”

It was the first Carnival win of the year for rider James Doyle. “He has a big following here and is a fan favorite at home in England, so this is a great result for him and for me.”

That Godolphin success followed on the hooves of an earlier Group 2 triumph in the Al Rashidiya. Benbatl with Oisin Murphy in command was the first of three hometown stable mates to cross the finish line by 3 3/4-lengths with Bay Of Poets another two lengths braver than Bravo Zolo.

The win was the sixth in this event for trainer Saeed bin Suroor in the 1 1/8-mile turf co-feature. “We have really liked him and he won well tonight,” said the trainer, noting it was the identical distance and same turf as his week one Carnival triumph in the Singspiel Stakes. “The Group 1 Jebel Hatta on Super Saturday and then hopefully the Group 1 Dubai Turf on World Cup day over this same course and distance are obvious targets.”

“He’s a seriously nice horse with a serious turn of foot,” added Murphy. “That is a potent weapon in races like these.”

Winning was the obvious target for Jordan Sport, making a quick turnaround from a loss last week to outpace Godolphin’s Steady Pace by a nose in the six-furlong turf sprint handicap. Sir Maximillian could only gain a maximum of third, 1 1/2 lengths back.

Appleby-trained Boynton and William Buick bounced past Kimbear by 2 3/4 lengths in a mile-long dirt handicap that attracted only five competitors. Stunned was just that, another 7 1/4 lengths off the leaders in third.

Drafted left Yalta in his draft by 4 3/4 lengths in the seven-furlong dirt sprint with Raven’s Corner nevermore than 2 lengths closer in third.

In the card-opening Al Maktoum Challenge Round 2 for Purebred Arabians, Barnamaj piloted by Jim Crowley turned the tables on Round 1 winner Paddy’s Day by an almost-identical head margin over 2200 meters of dirt. Shaheer observed from third, 5 1/2 lengths off.

The evening’s closer closed out a consecutive Carnival grand slam for Godolphin as Gold Star earned one for himself, jockey Christophe Soumillon and trainer bin Suroor in the 12-furlong turf marathon. A loser by a nose in week one, the 3-year old Darley-bred son of Nathaniel prevailed by a short head over stable mate Walton Street with Janszoon a head back in the evening’s tightest finish.

The Carnival reaches the halfway pole and the purses increase Thursday with the $250,000 Group 2 Al Maktoum Challenge Round 2 and the $200,000 Group 3 Al Shindagha Sprint. Three -year-old fillies will get a chance at $250,000 in the listed UAE 1000 Guineas. The triple-features all will be contested on dirt.

In news off the Meydan oval, it’s confirmed that Godolphin’s surprise Breeders’ Cup Turf winner Talismanic will be aimed to get his hooves dirty in the March 31 Dubai World Cup. Trainer Andre Fabre has yet to determine which prep will be the dirt primer for the 5-year-old multi-millionaire turf-specialist son of Medaglia D’Oro.