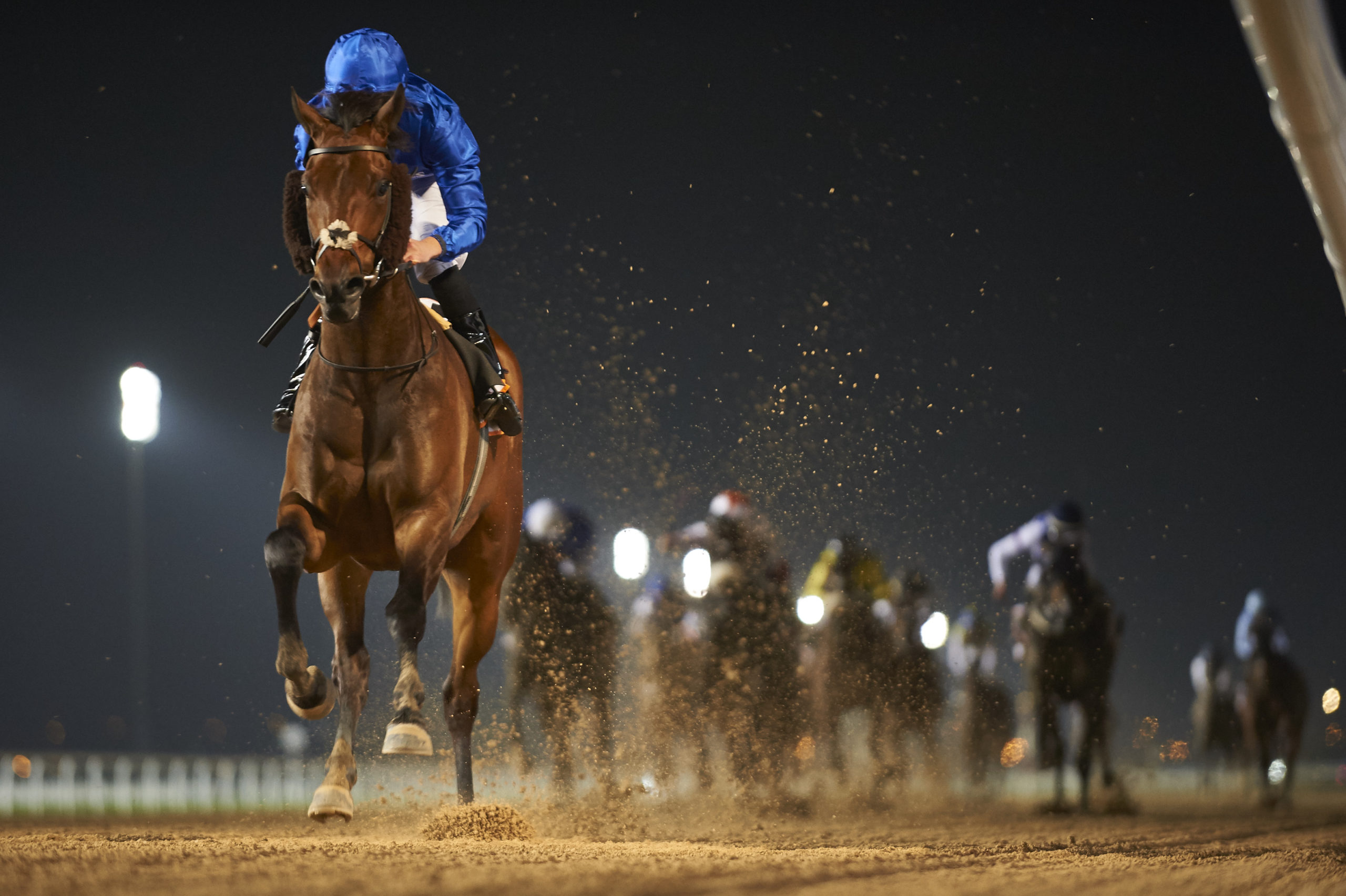 It was doubleheader week in Dubai and the Meydan “players” did not disappoint in a Thursday and Saturday Dubai World Cup Carnival pairing.

Godolphin’s Gold Town put away a full field of competitors Thursday to claim a stunningly easy 10 ½-lengths victory over Gotti in the featured mile-long Group 3 UAE 2000 Guineas to earn the winner’s share of the $250,000 purse, a spot in the UAE Derby on World Cup day and talk of possibility in the May 5 Kentucky Derby, one crown that has eluded the world’s most storied racing franchise. The winner’s stablemate Last Voyage was definitely that in completing the trio.

Winning even easier than in the seven-furlong trial three weeks ago, jockey William Buick separated his mount from the field at the halfway mark and could have galloped home with more lengths to spare. “He broke well and everything went smoothly,” said Buick. “I was even able to give him a pat before the line when I saw on the big screen that we had cleared the field. He was very impressive.”

Trainer Charlie Appleby will stretch his potential new star another quarter mile in the UAE Derby on World Cup day with an invitation to the Kentucky Derby waiting at the finish line. Last year’s Godolphin UAE Derby winner, Thunder Snow, refused to run for the roses on Kentucky Derby day and was pulled up after breaking badly and bucking.

The win was one of three in another successful Carnival outing for hometown Godolphin. Saeed bin Suroor-trained Best Solution bested Golden Wood by five lengths in the 12-furlong turf handicap with stablemate Memorial Day a forgettable third by another four lengths. The boys in blue didn’t give up as Don’t Give Up snared a two-length advantage over Saltarin Dubai in the 1 1/4-mile dirt handicap with Alabaster paler by another 1 1/2 lengths.

The Saturday meet featured the Group 2 Balanchine over 1 1/8 miles of turf for fillies and mares and the Group 3 mile-long dirt Firebreak Stakes, a tune-up for the Godolphin Mile on World Cup day.

Promising Run continued to fulfill for Godolphin in the Group 2 Balanchine despite carrying a weight penalty after her victory in the Group 2 Cape Verdi. Persistently challenged, first by last year’s winner Opal Tiara, then to the finish line by multiple Chilean Group 1 winner Furia Cruzada, the Hard Spun mare prevailed by the shortest of heads. Opal Tiara weakened to third by 2 1/2 lengths.

“It was a messy race,” according to jockey Pat Cosgrove. “I did want to get the lead, but I was left in front far too long, but she fought off the eventual challengers one-by-one. And she carried a penalty, which usually gets a horse beat, but she got the job done.”

Trainer bin Suroor will aim her next at the Group 1 Jebel Hatta on March 10 in preparation for the Group 1 Dubai Turf on World Cup day.

The Firebreak Stakes saw heavily favored Heavy Metal break away from the six-horse field to leave Cosmo Charlie in orbit by a resounding 9 1/4 lengths with Fantastic Four a less-than-fantastic third by another 6 1/4 lengths.

“He just loves the dirt surface here at Meydan,” stressed winning jockey Mickael Barzalona. “The mile is probably his ideal trip, so last week’s 1 1/4 mile may have been a bit long.” The gelded son of Exceed And Excel will try to do both for trainer Salem bin Ghadayer in the Godolphin Mile on World Cup day.

Other Thursday contests saw High On Life master Dutch Masterpiece by 3/4 of a length in the six furlong dirt handicap with Out Do outdone by another 5 1/4 lengths.

The evening’s longest contest, the two-mile turf marathon had the closest finish, with the top three all within a neck. Prince of Arran gained the scepter by a short head over Los Barbados with Red Galileo a nose off.

Saturday opened with Appleby-trained Baccarat and jockey Buick a crystalline three lengths in front of Faatinah with Sir Maximilian a short head in third in the six-furlong turf handicap. The nine-furlong turf handicap had Mike de Kock-trained Baroot 1 3/4 lengths better than Muzdawaj with Azmaam two lengths the lesser.

Yalta gave trainer bin Ghadayer and jockey Barzalona a double on the night by five lengths over Taamol in the six-furlong dirt handicap with Stunned a less-than-stunning 4 3/4 lengths in third.

Blair House completed another Godolphin hat trick with a 2 3/4-length advantage over Mountain Hunter while Mailshot delivered third by a head.

Oh This Is Us closed the evening with a 3/4-length win over Godolphin’s Top Score and the rest of them in a 14-horse field, including Van Der Decken, closing the evening a half-length back.