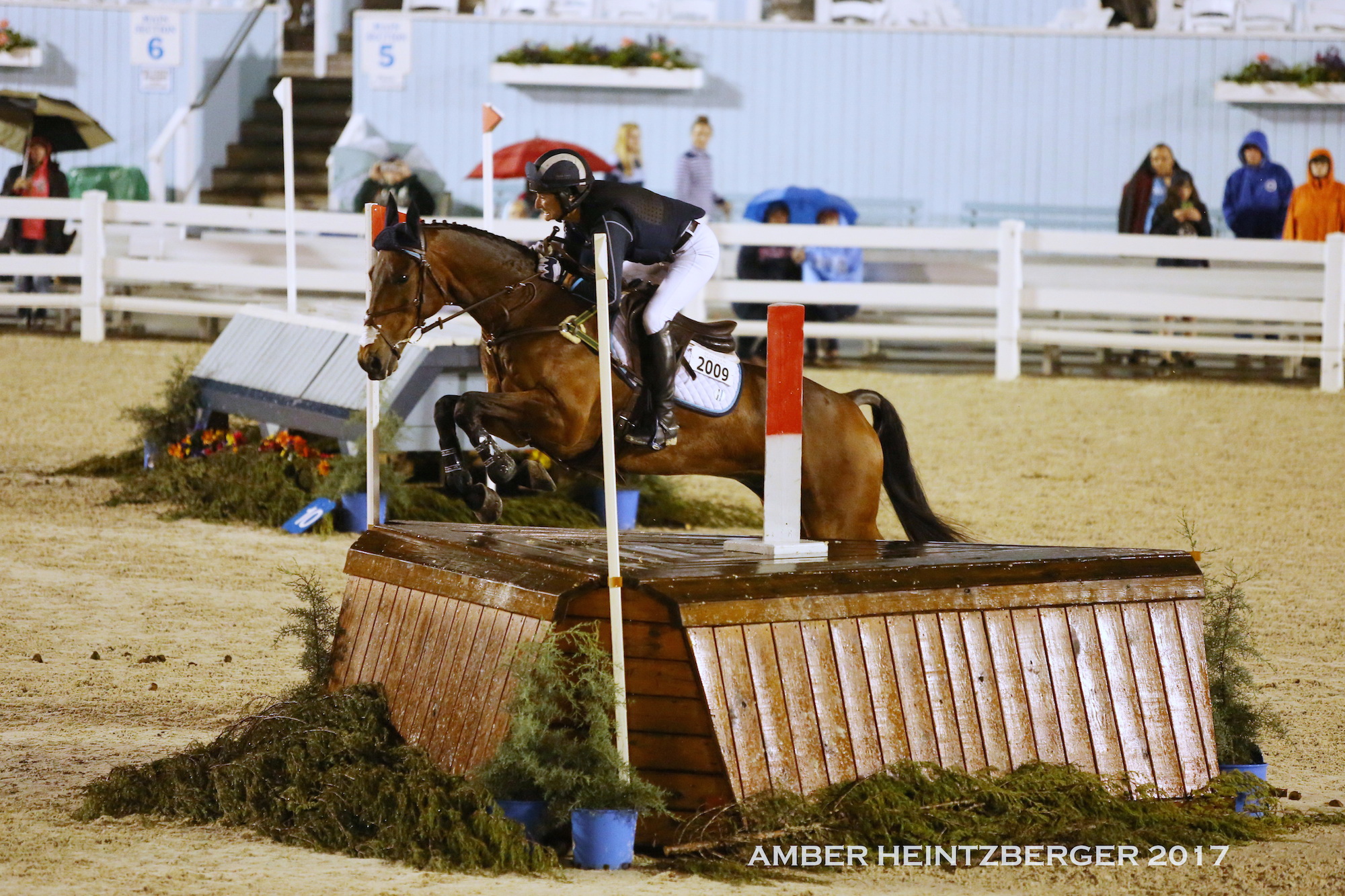 Who ruled the inaugural Arena Eventing class at Devon? Girls!

The top prize went to Sara Kozumplik Murphy for laying down a blistering run of 75.03 in the jump off riding the gray Selle Francais gelding Rubens D’Ysieux. Second place went to Jennie Brannigan, and third to Erika Nesler, both locally based riders. Jennie rode Nina Gardner’s Cambalda, who had just won the CCI2* in Virginia, and Erika was aboard Right Above It, a recently minted two-star competitor owned by Doug and Cindy Howe.

The stands were packed for the inaugural event in spite of the fact that the skies opened up and poured rain for the duration. The weather didn’t bother the hardy event riders who sprayed some extra stick-tite on their saddles and gave it their all.

There has long been a challenge to bring eventing to the mainstream, and smaller exhibition-style competitions like the one at Devon have become popular in recent years with that goal in mind. Eventing made its debut at the Devon Horse Show and Country Fair with a $50,000 Devon Arena Eventing class presented by Mid-Atlantic Packaging.

The format, offering a shortened, exhibition style format in a show setting, aims to expose fans of other equestrian events to the sport of three-day eventing. Similar events take place at the Royal Winter Fair in Toronto, the Stuttgart Horse Show, the Royal International in England and at the Eventing Showcase in Wellington, Florida.

“I’d never done the Royal, but I had been to Wellington a couple of times, that was fun,” said Kozumplik Murphy. “I did it last year and then this year with Ruben and gave my other horse to Mark Todd to ride. This was my first Arena Eventing – I thought it would be more show jumpy, like the Hickstead Derby. So I was a little surprised how many cross country jumps were on the course. I’m no show jumper but my horse is fantastic and I tried to stay out of his way a bit. We had great experience and a lot of fun to get to ride at Devon.”

The class is invitational, but riders must have achieved at qualifying score in a CCI2* or jumping at 1.40m in show jumping. One show jumper laid down the gauntlet against the eventers, but did not complete the course.

Two of the competitors entered the arena with particularly high expectations: Canadian Waylon Roberts has won the Indoor Eventing in Toronto a number of times over the years, and US Olympian Boyd Martin, whose farm is just down the road in Cochranville, PA, is the three-time winner of the Eventing Showcase in Wellington. Waylon ended up fourth on John and Michele Koppin’s Lancaster and ninth on Kelecyn Cognac, owned by Anthony Connolly and L. Skye Levely; Martin was 7th on Ray Price, owned by Windurra USA, and 12th with Christine Turner’s Kyra. Doug Payne, an upper-level eventer who also competes in Grand Prix Show Jumping, claimed 5th place riding Flagmount’s Mischief.

The course, designed by Capt. Mark Phillips, consisted of 25 fences over approximately 1,000 meters. Combining both show jumps and cross country jumps, the first round took horses and riders through Dixon Oval, out into the Gold Ring for a fast and forward-riding loop, then back into the Dixon Oval, the main arena at Devon. Faults were given for knockdowns and exceeding the maximum time, and the top twelve proceeded to a jump-off that consisted of a shortened course in the Dixon Oval. 29 horse and rider combinations represented the United States and Canada. “In the beginning of the course I actually got a bit lost,” Kozumplik Murphy admitted. “I had walked a certain distance and set up to do that but I locked onto fence 14 instead of fence four which was a big bloody mistake, but it all worked out in the end. He is a fast horse but he’s rideable and relaxed in his job. I wasn’t slow but I took a couple longer lines because I know my horse and he’s really good, but there’s no way I’m going to come to an accuracy jump to an open bravery question, that’s just stupid.”

Fun fact: the portable cross country fences were leased to Devon from Fair Hill International. Jump builder Eric Bull and his crew from ETB Equine Construction picked up the jumps early in the morning and hauled them to Fair Hill, then coordinated with Capt. Phillips to set up the course. After the competition wrapped up around 9:30pm they packed everything up and returned the jumps to Fair Hill.

A long, straight gallop to the final fence on course resulted in a number of riders having a heartbreaking rail down after otherwise clear rounds, dashing dreams of taking home a pocketful of cash. The enthusiastic crowd stamped their feet and cheered for the favorites, and the first double clear round, belonging to Waylon, nearly brought the house down. But it was all in good fun, rain and all, and Sara, who threw a victorious fist in the air as she crossed the finish line, was particularly pleased with her win and the $12,500 prize that she took home.

“I think having this at Devon is good for us as competitors, to get into that atmosphere and practice under pressure,” said Kozumplik Murphy. “It also brings eventing to a new audience. People moan that it’s not ‘classic eventing’, but Mark Phillips did a really nice job with the course. It was nice letting the horses get into the other ring and take a few fences out of stride, then come back into the main arena. We all know it’s not ‘classic eventing’, but people need to understand what we do. Show jumpers tend to look down on eventers, but the standard of riding has gone up dramatically even since my first four-star in ’99. Look at Michael Jung. I think it’s important to do something where we can have a bunch of people sitting in a grandstand and seeing what we do.”

Here are a few fun facts about the winning pair, Sara Kozumplik Murphy and Rubens D’Ysieux: