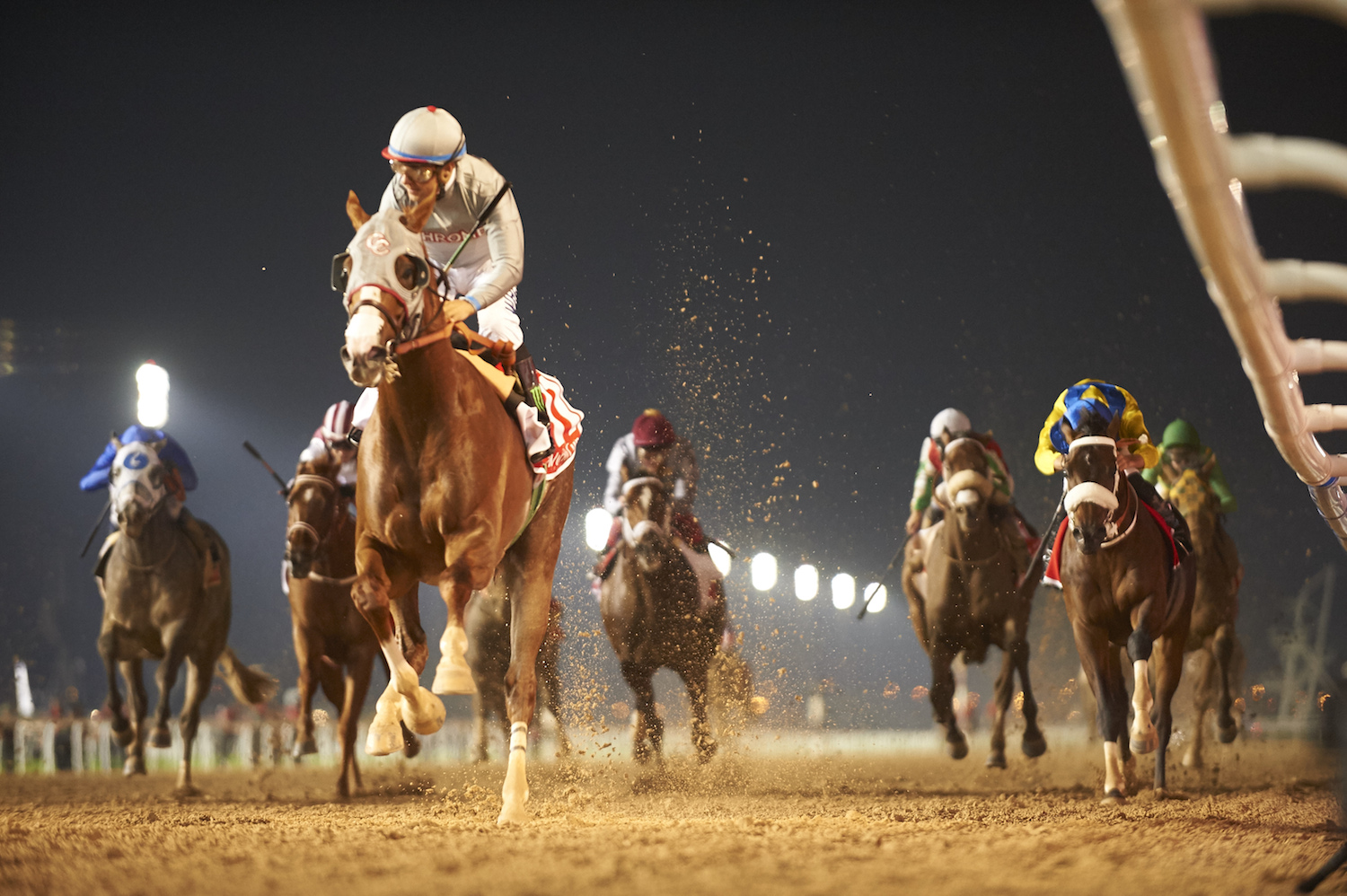 If “April is the cruelest month”, as T.S. Eliot famously wrote, then January may be the coolest month for horse racing fans, and not just because of the plunging temperatures. The annual Eclipse Awards honoring the best in racing in 2016 to be announced on Jan. 21 at Gulfstream Park in Florida. Gulfstream will also host the inaugural $12 million Pegasus World Cup Invitational on Jan 28. The world’s richest race will feature a rematch between current Horse of the Year candidates California Chrome and Arrogate, who beat Chrome by a half-length in the Breeders’ Cup Classic at Santa Anita November 5. And soon the prep races leading up to the Run for the Roses, The Kentucky Derby, will commence.

The coolest month in racing left the starting gate 8,000 miles away last Thursday night in Dubai with the first meeting in the Dubai World Cup Carnival at Meydan Racecourse. The annual 10-meet season features the best and the most aspiring stars in international racing. Horses strut their considerable stuff in the real carnival-like atmosphere of the newest and largest thoroughbred racing facility in the world, one featuring seats that glitter colorfully like a display of iMacs along a mile-plus long grandstand, the world’s longest single structure, protected by a power-generating solar cell-infused wing-shaped roof that serves as a reminder of the Falcon, the national bird of the United Arab Emirates.

This year’s Carnival features 217 accepted horses, including 54 graded race winners, representing 18 countries, and total prizemoney of nearly $11 million. It will culminate in the richest single day in racing, the $30 million Dubai World Cup day, Saturday March 25, with the $10 Dubai World Cup race as the crown jewel.

The Dubai World Cup and the racing Carnival that precedes it were the brainchild of Dubai Ruler Mohammed bin Rashid Al Maktoum, among the world’s most avid horsemen. Sheikh Mohammed initially conceived of the idea of the world’s richest race day specifically to attract American Champion Cigar to race in the inaugural Dubai World Cup in 1996, hoping to put his small Emirate on the Persian Gulf on the map as a race fan and tourist destination. Cigar came and conquered fellow American Soul of the Matter in a thrilling stretch run, and the legend of the Dubai World Cup, and of Dubai, was born. 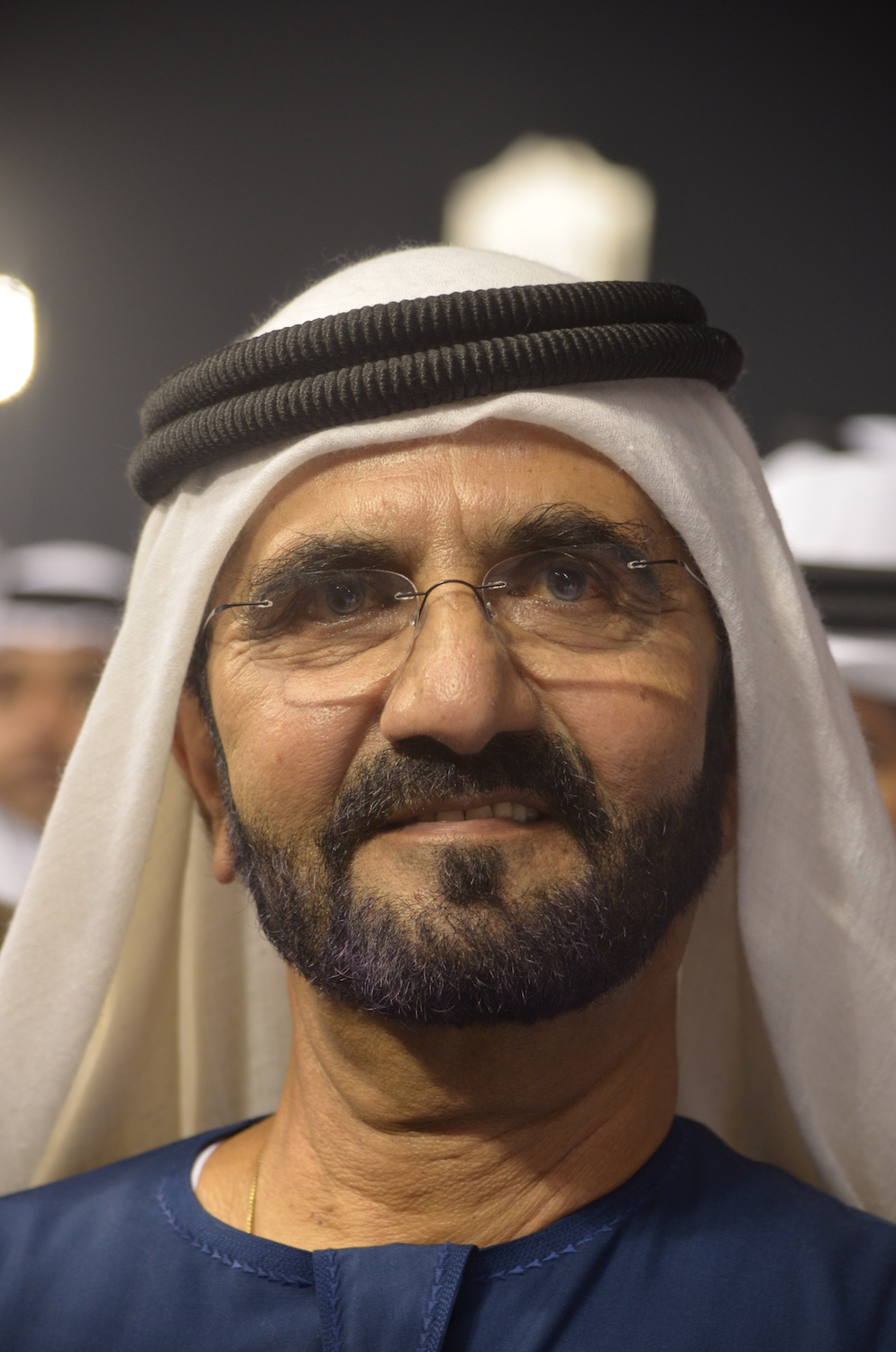 Sheikh Mohammed is particularly fond of Arabians. He is eager to point out that three Arabian stallions— The Godolphin, The Darley and The Byerley Turk—were brought to Britain by military officers and became the foundation of the modern Thoroughbred line. He has named his racing operation Godolphin, and his breeding operation Darley after those progenitors. While Thoroughbreds are the stars in Dubai, the first race on each Carnival race card features a Purebred Arabian race in honor of the breed. 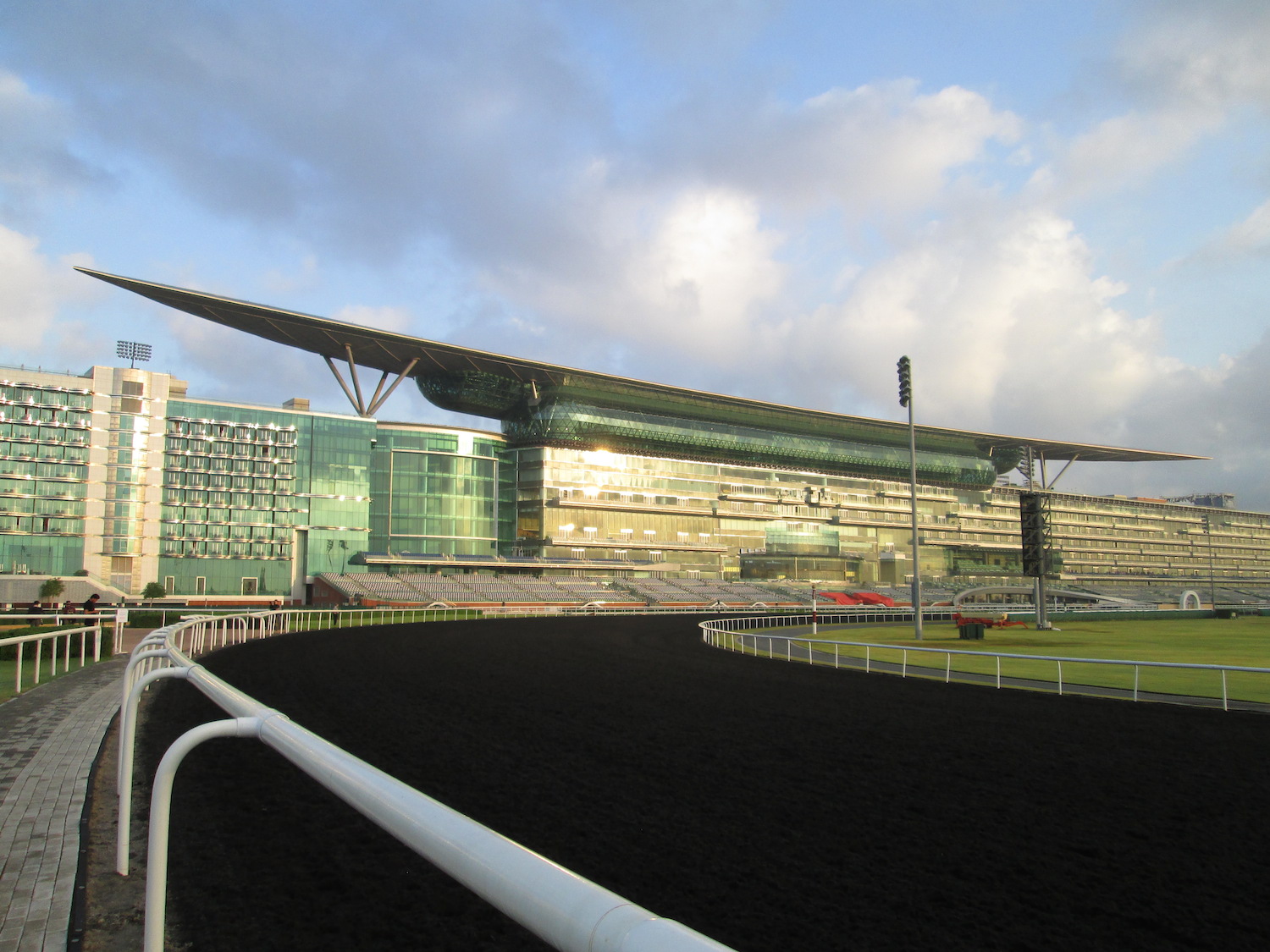 In the early years, the Carnival and the DWC were run on dirt and turf at Nad Al Sheba Racecourse. That changed with the completion of Meydan Racecourse—Meydan means “Meeting Place” in Arabic—in 2010. An artificial surface, Tapeta, was installed instead of dirt alongside the turf course. That surface was replaced with dirt two years ago, many say to attract more American horses which historically did not fare as well at Meydan in its first years as European runners on the cushioned Tapeta surface. Only two American runners had won on Tapeta on World Cup day: Kinsale King in the 2010 G1 Dubai Golden Shaheen, and Animal Kingdom in the 2013 G1 Dubai World Cup.

Once again, the idea worked when popular 2014 Horse of the Year California Chrome travelled to Dubai and beat a star-studded field to collect the $6 million World Cup check and become Dubai’s and North America’s all-time leading money-winner with $8,090,000 and $14,502,650 in earnings respectively. 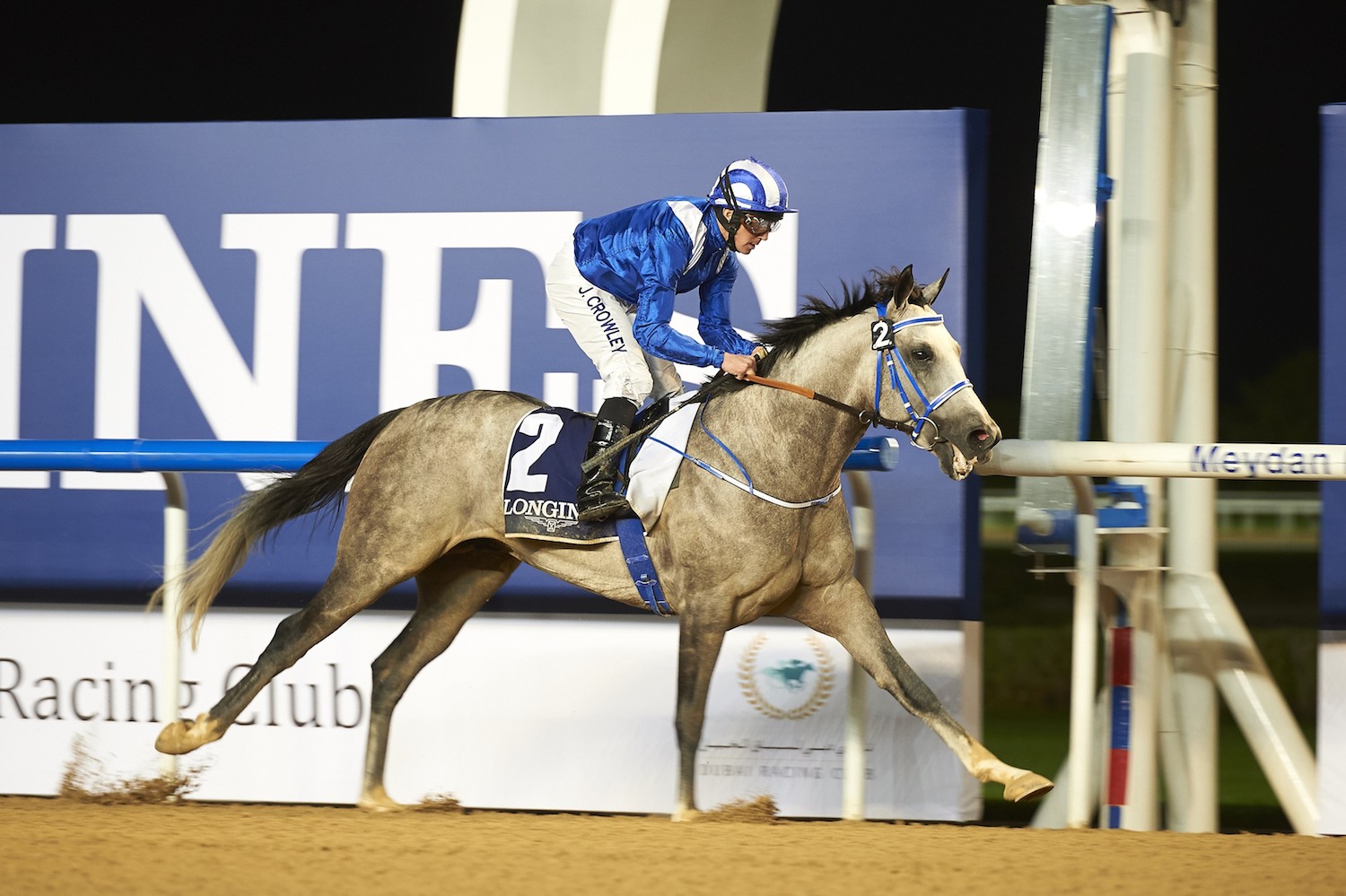 The big winner on night one was Le Bernardin, becoming the first horse to score consecutive victories in the one mile Group 2 Al Maktoum Challenge Round 1 on dirt, sponsored by Longines and run since 1994. The 8-year-old son of 2006 Preakness winner Bernardini took the early lead following his start in gate one in a fast early pace. He relinquished it to Frankyfourfingers and settled into fourth stalking Long River and Cool Cowboy. Those leaders faded to the winner in the last furlong leaving Long River two lengths behind at the finish with Argentinian invader Lindo Amor a neck back in third. 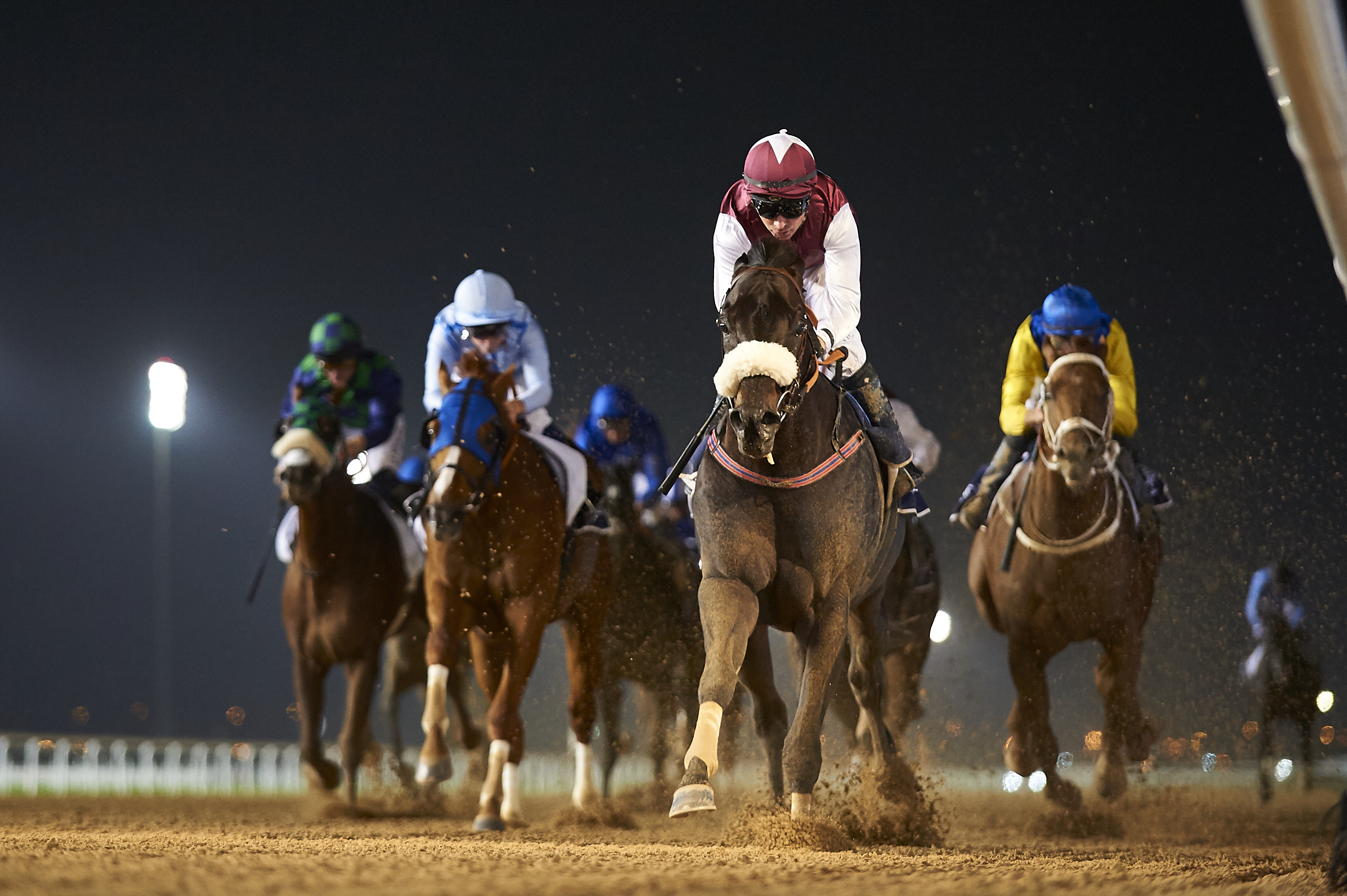 Jockey Tadhq O’Shea had nothing but praise for his mount, saddled by local trainer Ali Rashid Al Rayhi. “He has so much early speed,” said O’Shea, “but he’s a great horse for a jockey because he is so versatile and does not have to have the lead, but easily takes it when asked.”

The three Maktoum Challenge rounds serve as the preps for several World Cup day races and O’Shea seemed to suggest his winner is headed for a similarly shorter run on March 25.

“I think 1600m is his optimum trip and I knew he would find plenty when I asked him as he is so brave,” said O’Shea. “The Godolphin Mile is his main target and perhaps he will just have one more run before, then again on Super Saturday.” Super Saturday, the final prep day for World Cup Day runners is March 4.

Significantly, last year’s star filly at Meydan, Polar River, moved up in class and against the boys for the first time in this race, but could manage only an 8th place finish 10 lengths behind the winner and a neck behind another Al Rayhi-trained colt, Munaaser. The Doug Watson-trained 4-year-old earned enough points for in the 2016 Kentucky Oaks, but her connections opted not to ship her to the U.S. Instead, the only horse to beat her at Meydan, Lani in the UAE Derby, went on to the Kentucky Derby where he finished 9th, and competed in both the Preakness Stakes and Belmont Stakes, finishing 5th and 3rd respectively.

In other opening-night races, Golden Wood, guided by Christophe Soumillon, hammered out a short head win over Carbon Dating in the 1 ½-mile Longines Grand Classique on turf, with Rio Tigre 2 ½ lengths back in third. The 1 1/8-mile Longines Passion saw Mizbah earn a breathless 7 ½-length romp over Hunting Ground with Top Clearance able only to clear in third by a short head.

Ertijaal journeyed from Ireland to master the Longines Master Collection 1000-meter turf sprint and earn jockey Jim Crowley a second win, with The Happy Prince 1 ¾ lengths behind but a short head happier than Caspian Prince. Light The Lights lit up the turf course over 1800 meters to gain an evening’s championship by a neck, and a second win for Christophe Soumillon, over Championship in the co-featured Longines Singspiel Stakes with Earnshaw earning third three lengths back. A good first night of Carnival racing ended with Flash Fire blazing to a 2 ½-length victory over Germany’s Rene Mathis with American Ghaamer a neck behind in third. Godolphin-retained Norwegian jockey William Buick took home the rider’s trophy.

Richard R. Gross is journalist and journalism professor. He has helped establish journalism programs in Japan, the UAE, China and Kazakhstan. He is a member of the National Thoroughbred Writers and Broadcasters.